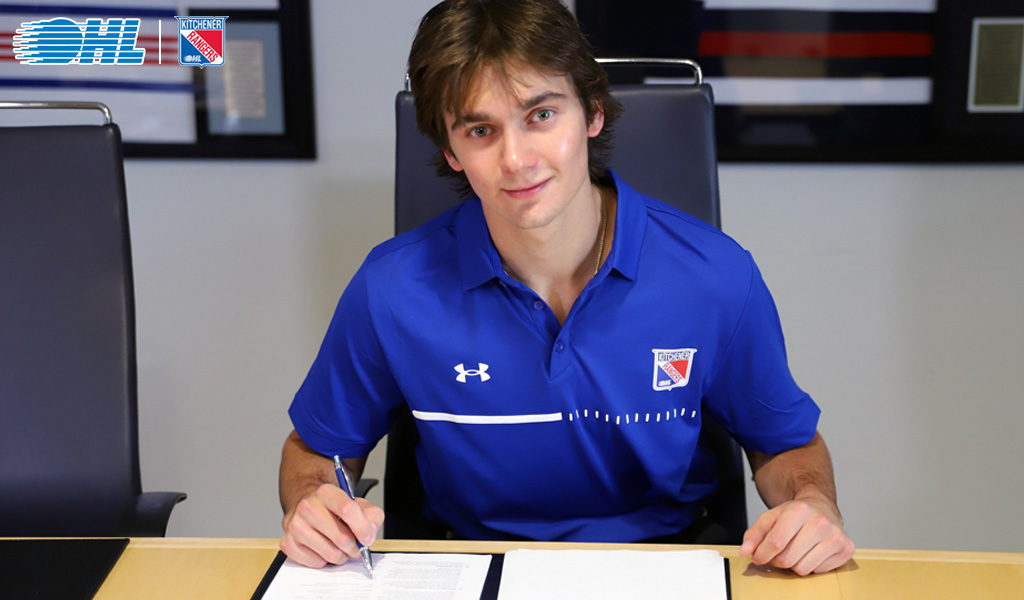 Morey, 17, played his AAA youth hockey locally with the Kitchener Jr. Rangers in the Minor Hockey Alliance of Ontario (MHAO) before being selected by the Owen Sound Attack in the fifth round (87th overall) of the 2021 OHL Priority Selection. The Rangers acquired the playing rights to Morey in a trade with Owen Sound on Wednesday before signing Morey to an SPA Thursday.

“We are excited to welcome Kyle to the Rangers,” said Kitchener Rangers General Manager Mike McKenzie. “He had a great season as a 16-year-old in St. Marys and we feel his hockey sense and skill will transition nicely to our level. We look forward to playing a role in Kyle’s development moving forward.”

After his time with the Jr. Rangers, the 5-foot-11, 160-pound forward recorded an impressive 44 points (18G, 26A) in 48 Jr. B games with the St. Marys Lincolns in the Greater Ontario Junior Hockey League (GOJHL). He added another eight points in 13 playoff games during the 2021-22 GOJHL Playoffs.

“I honestly couldn’t believe it at first when I got the call from the Rangers,” said Morey. “It’s a crazy feeling. To see it all come to reality is special and something I wanted my whole life. Growing up, Tuesday’s and Friday’s at The Aud, watching them play on Rogers TV 20, to be in their shoes now is surreal to me. I still can’t get over it.”

Notably, Morey was selected to compete in the most recent GOJHL 2021-22 Future Stars Game, featuring the top 16-year-old players in the GOJHL.

“It’s a true honour to be able to put on the Rangers’ jersey in a great community,” added Morey. “I believe they have the best fans in the league and to be able to play for the Rangers now is truly an honour.”

Morey joined the team for practice Thursday and will wear number 23 with the Rangers. He joins Joseph Serpa (Cambridge) and Matthew Sop (Kitchener) as the third local skater currently signed by the Rangers.

The Rangers are back home at The Aud to round out their home pre-season schedule this Saturday, September 24th as the Blueshirts host the Mississauga Steelheads. Puck-drop will be at 4:00 p.m. for the Saturday evening tilt. Pre-season tickets are $12 for adults and $10 for children and can be purchased online here, by calling the Centre In The Square Box Office at (519) 578-1570, visiting the Activa Box Office at the Kitchener Memorial Auditorium at 400 East Ave. Kitchener, ON N2H 1Z6 or at the Centre In The Square Box Office at 101 Queen St N, Kitchener, ON N2H 6P7.