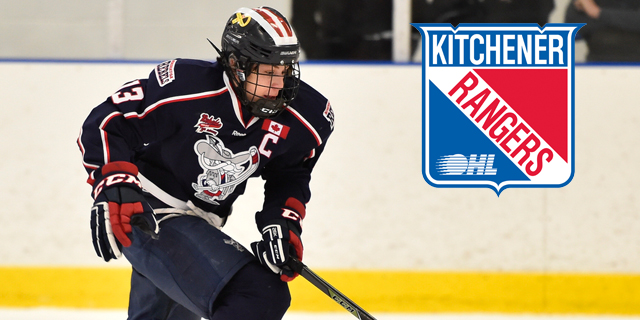 Kitchener, ON – The Kitchener Rangers announced today that forward Riley Damiani has committed to an Ontario Hockey League standard player agreement with the club. Damiani was the team’s 2nd round pick (29th overall) in the 2016 OHL Priority Selection.

The 5’8, 153lb Mississauga, Ontario native was drafted from the Mississauga Rebels of the GTHL in April’s draft. Damiani registered 34 goals with 41 assists for 75 points and 52 penalty minutes in 71 games played in the 2015-16 regular season.

He was a member of the OHL Gold Cup winning GTHL Blue in May, registering two assists in the tournament.

Billed as a hard worker with a keen hockey sense, he effectively uses explosiveness and strong skating to generate offence on a consistent basis.

“We were thrilled when we were able to draft Riley in the second round last month, and we’re excited to welcome him and his family, officially, to our Rangers organization,” said general manager Murray Hiebert.

“Riley had a strong showing at Spring Camp, and he’s more than earned his chance to make the jump to the OHL level this season.”