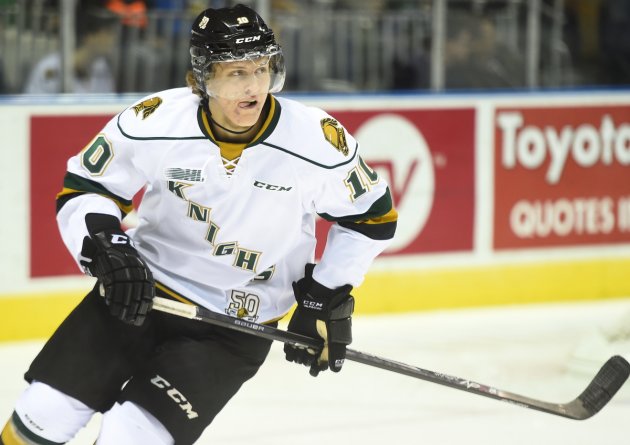 Toronto, ON – The Ontario Hockey League today announced that Arizona Coyotes prospect Christian Dvorak of the London Knights is the Pioneer Energy OHL Player of the Week for the week ending December 14 after recording 12 points in three games including six goals and six assists with a plus-minus rating of plus-5.

The second straight Knights’ forward and Coyotes prospect to earn the award, Dvorak recorded three multi-point performances helping his club win three straight games to extend their winning-streak to five.  Dvorak began the week with two goals and two assists as first star of a 5-2 road win over the Sarnia Sting on Thursday.  One night later, Dvorak earned first star honours again by matching a career-high with a five-point effort scoring his first career hat-trick including the game-winner and adding two assists in a 6-4 home win against the Plymouth Whalers.  His week wrapped up Sunday at home with a goal and two assists receiving second star honours in a 5-2 victory over the Peterborough Petes.

Watch video highlights of Dvorak and the Knights against the Sting and Whalers.

Dvorak, an 18-year-old from Frankfort, Illinois, is playing in his second OHL season with the Knights.  Selected by the Coyotes in the second round of the 2014 NHL Draft, Dvorak is currently fourth in OHL scoring with 53 points in 30 games including 22 goals and 31 assists.

Also considered for the award this week were a pair of 2015 NHL Draft prospects including Mitchell Stephens of the Saginaw Spirit who scored four goals and two assists for six points in two games, and Blake Speers of the Sault Ste. Marie Greyhounds who scored five goals in three games.  In goal, Troy Timpano of the Sudbury Wolves went 2-0-0-0 with a shutout victory posting a goals-against-average of 0.50 and save percentage of .986.