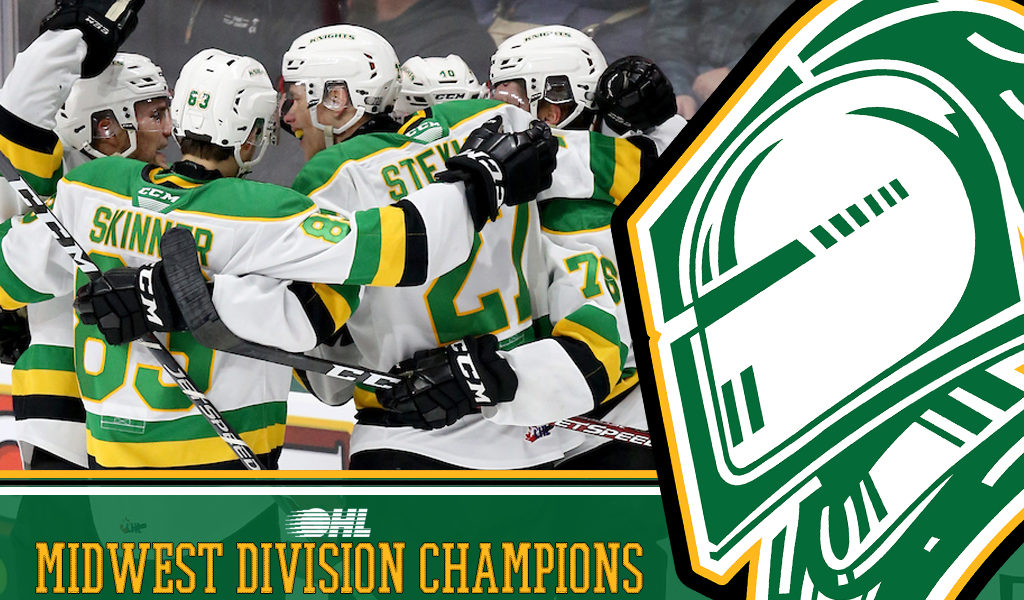 For the second straight season, the London Knights have secured the Holody Trophy as Midwest Division champions.

The Knights wrapped up their successful season with a 3-1 win over the Oshawa Generals on March 8th, capping off a seven-game winning streak. Columbus Blue Jackets prospect Liam Foudy registered a goal and an assist, extending his point streak to its 18th game while Washington Capitals pick Connor McMichael scored his 47th goal to earn his career-high 102nd point of the season. The win cemented the Knights’ 2019-20 regular season record at 45-15-1-1, good for 92 points atop the Western Conference standings.

McMichael’s 102 points place him third among OHL skaters; a position he also owns in total goals scored with 47. Defenceman Ryan Merkley, a San Jose Sharks draftee, tallied the second highest point total of 76 (15-61—76) among blueliners while NHL Draft hopeful Luke Evangelista put up an exceptional 23 goals and 61 points in his sophomore year.

Rookie netminder Brett Brochu played a big part in London’s success, finishing one shy of the League lead in wins with a record of 32-6-0-0, setting an OHL all-time record for victories by a 16 or 17-year-old goaltender.

The Knights excelled once again under the coaching of Dale Hunter, who surpassed the 800-career victory mark this past season in addition to guiding Canada’s National Junior Team to a gold medal finish at the 2020 World Juniors.

Since joining the Midwest Division at the start of the 2002-03 season, the Knights have earned the Holody Trophy – named in honour of  former owner and governor of the Guelph Platers and Owen Sound Platers Joe Holody – a total of 10 times. Prior to that, they clinched first in the West Division during the 1997-98 campaign, and finished atop the Emms Division in 1977-78 and 1989-90.