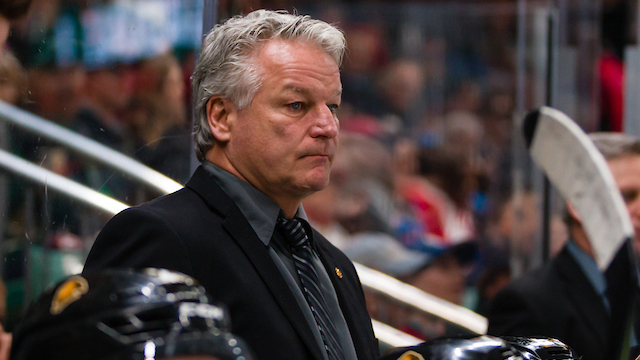 Dale Hunter’s 1,000th OHL regular season game on Saturday was also his 669th career victory as the London Knights edged the Saginaw Spirit 4-3 on the road.

Dante Salituro’s late game winner helped the Knights improve to 28-7-2-3 and remain deadlocked in a first place tie with the Erie Otters atop a very competitive Midwest Division.

Hunter began his tenure in London during the 2001-02 season and has achieved great things with the Knights, becoming the fastest coach in OHL history to win 500 games on March 16, 2013.

In addition to his impressive OHL track record, Hunter spent part of the 2011-12 season as head coach of the NHL’s Washington Capitals and coached Canada’s Under-18 team to a gold medal at the 2014 Ivan Hlinka Memorial Tournament.

Throughout his time in London, Hunter has aided in the development of eventual NHL standouts in Corey Perry (Anaheim Ducks), Patrick Kane (Chicago Blackhawks), Mitch Marner (London Knights) and Matthew Tkachuk (Calgary Flames) among several others.

The Knights are currently in the hunt for their 17th consecutive playoff berth and have appeared in the Mastercard Memorial Cup in four of the last five years.