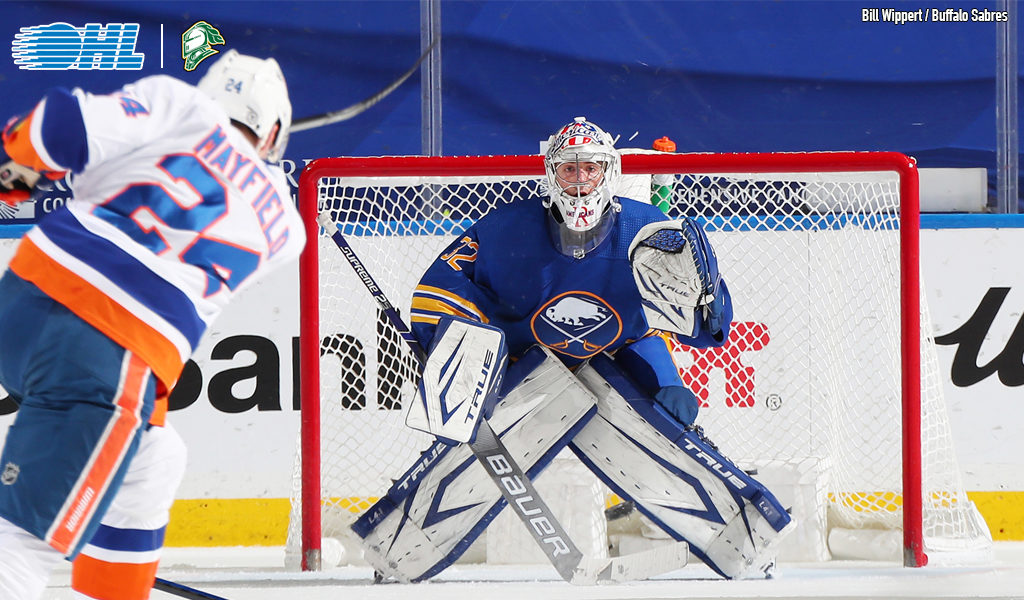 Michael Houser‘s NHL dream finally came true on Monday night in Buffalo as the 28-year-old took full advantage of an opportunity he thought might never come.

Houser, who is a co-holder of the OHL’s single season wins record of 46 and won the Red Tilson Trophy as the OHL’s Most Outstanding Player with the London Knights in 2011-12, turned aside 34 shots as the Sabres stopped the New York Islanders 4-2. The Youngstown, Ohio native excelled in his first game since way back on March 3, 2020, a pre-pandemic shutout for the ECHL’s Cincinnati Cyclones. He became the Sabres’ sixth starting goaltender of the season on Monday.

“I know it’s so cliché, but they always tell you to stay ready,” Houser told media post-game. “I’ve taken that to heart the last few years, mostly for a chance to play for the Amerks and take that net, if I ever had the chance to do that. Just being a weird year, I kind of skipped that step and got this game.”

The Sabres signed the veteran journeyman to an NHL contract on March 19 with injuries mounting in the crease. He spent most of his time on the taxi squad prior to Monday’s breakthrough as fellow former Red Tilson Trophy winner Ukko-Pekka Luukkonen went down with an injury and Dustin Tokarski was unavailable for personal reasons.

After being informed he’d be starting, Houser called his parents, the two people he says have seen every game since he was five-years-old.

“It’s so exciting,” he said. “Like, I’ve worked my whole life for this, for it to happen. Just to play a game is really special. But to win, winning is always the goal. That’s why we play.”

“I’ve worked my whole life for this.”

Houser’s strong play earned him another start as Sabres interim coach Don Granato announced he’ll be starting again on Tuesday as Buffalo plays its final home game of the season against the same New York Islanders.

It’s been a long and winding road to the NHL for Houser, who was never drafted to the OHL and cracked the Knights’ roster in 2009, eventually hoisting the Robertson Cup in green and gold in 2012 before backstopping London to within one win of a Memorial Cup in Shawinigan. In his eight seasons since graduating from the OHL undrafted, he’s appeared in 210 regular season ECHL contests, going an impressive 127-57-22 while being awarded league Goaltender of the Year honours in 2018-19. He’s also taken the crease in 73 regular season AHL contests in that same span.

Houser becomes the 13th member of the 2012 OHL champion London Knights to play in the National Hockey League, making the most of an opportunity he’s worked his entire life for.