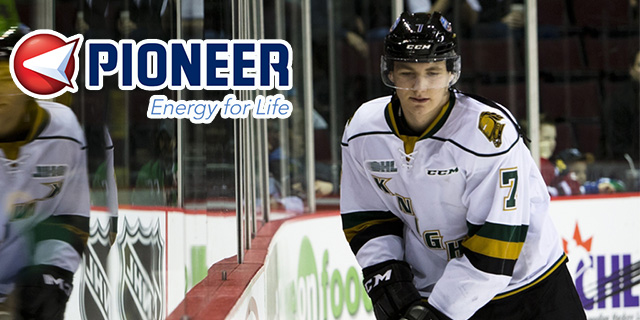 Toronto, ON – The Ontario Hockey League today announced that 2016 NHL Draft prospect Matthew Tkachuk of the London Knights is the Pioneer Energy OHL Player of the Week for the playoff week ending April 24 after scoring four goals and two assists for six points in two games with a plus-minus rating of plus-3.

Tkachuk earns the award for the second time this post-season after recording a pair of multi-point performances on the road against the Erie Otters helping the Knights take a 2-0 lead in the Western Conference Championship Series.  In Game 1 on Wednesday night he picked up his second playoff hat-trick including the game-winner while adding an assist as third star of the Knights 7-4 win, then scored his 14th goal of the 2016 OHL Playoffs plus an assist in Sunday’s 6-1 Game 2 victory.  The battle for the Wayne Gretzky Trophy shifts to London with Game 3 and 4 set for Tuesday and Wednesday night respectively.

An 18-year-old from St. Louis, Missouri, Tkachuk is listed second among North American skaters for the 2016 NHL Draft in NHL Central Scouting’s final draft rankings.  The first year Knight is second in playoff scoring with 28 points in 12 games played after finishing fifth during the 2015-16 regular season with 107 points in 57 games.

Watch video highlights of Tkachuk and the Knights against the Otters in Game 1 and Game 2.

Also considered for the award this week were Knights’ co-captains Mitch Marner and Christian Dvorak who both scored twice with four assists for six points in two games.  Together with Tkachuk the trio combined for eight of the club’s 13 goals in the first two games of the West Final.  In goal, Carolina Hurricanes prospect Alex Nedeljkovic backstopped the Niagara IceDogs to a 2-0 series lead against the Barrie Colts in the Eastern Conference Championship Series stopping 54 shots with a goals-against-average of 1.50 and save percentage of .947.