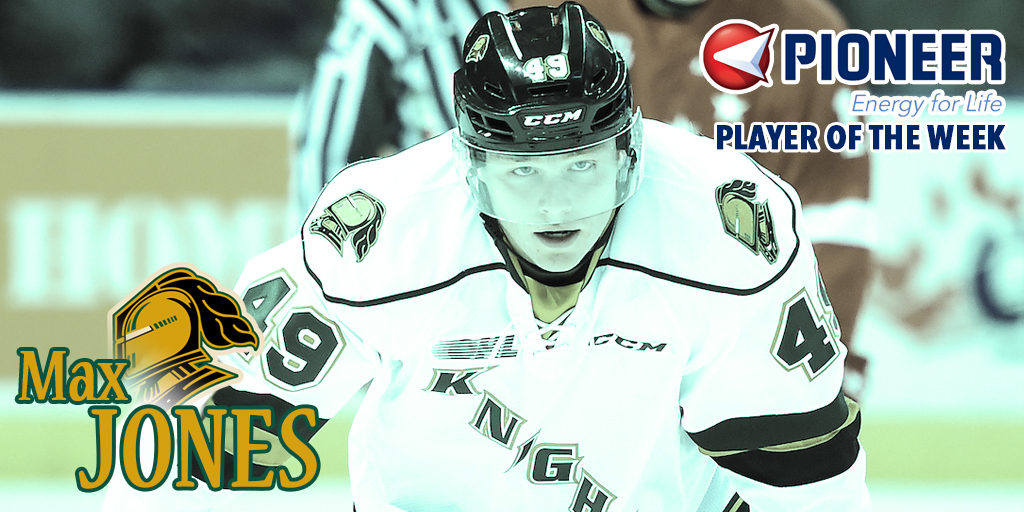 Toronto, ON – The Ontario Hockey League today announced that Anaheim Ducks prospect Max Jones of the London Knights is the Pioneer Energy OHL Player of the Week for the week ending October 23 after scoring two goals and five assists for seven points in two games along with a plus-minus rating of plus-4.

Jones extended his season-long point-streak to six with a pair of multi-point performances last week for the Knights who have now won three-straight games.  On Thursday night he collected three assists in a 5-4 comeback win over the Kitchener Rangers including a helper on Victor Mete’s last minute game-winner.  Then on Friday night, Jones had the best offensive game of his career with two goals and two assists as first star of a 5-1 win over the Saginaw Spirit.  Following a 7-2 win over the Hamilton Bulldogs on Sunday, the Knights now carry a 7-2-1-1 record for 16 points in the Midwest Division.

An 18-year-old from Orion, Michigan, Jones is playing in his second career OHL season with the Knights after being a first round pick in the 2014 OHL Priority Selection.  Jones scored 28 goals with 24 assists for 52 points in 63 games as a rookie before being chosen 24th overall by the Ducks in the 2016 NHL Draft.  In August the power forward was signed to an entry-level contract before attending his first NHL Training Camp with Anaheim.

Watch video highlights of Jones and the Knights against the Rangers and Spirit.

Also considered for the award this week was Tampa Bay Lightning prospect Taylor Raddysh of the Erie Otters who scored four goals and three assists for seven points in three games, and Bobby MacIntyre of the Sault Ste. Marie Greyhounds with two goals and five assists for seven points in three games.  In goal, 2017 NHL Draft prospect Michael DiPietro of the Windsor Spitfires went 1-1-0-0 with a shutout victory posting a goals-against-average of 1.01 and save percentage of .967.

Related Links
VIDEO: Jones with 3A in comeback win over Rangers VIDEO: Career-high 4PTS for Jones in win over Spirit
More News