Knights’ McMichael and Merkley named to Vaughn CHL Team of the Week for Jan. 27 – Feb. 2 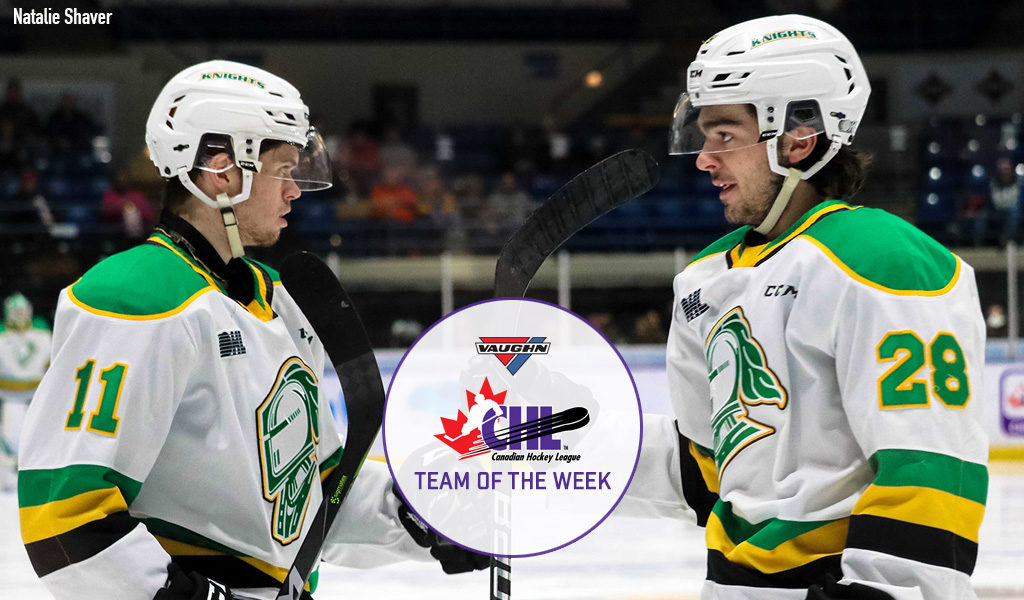 The Canadian Hockey League today announced the 19th edition of the Vaughn CHL Team of the Week for the 2019-20 season based on individual performances from Jan. 27 – Feb. 2.

Headlining the group is Sherbrooke Phoenix captain and Pittsburgh Penguins first-round pick Samuel Poulin whose 11-point performance counting five goals and six assists over three games sees him make the Vaughn CHL Team of the Week for the second consecutive week. Currently riding a five-game point streak, that stretch included a five-point night versus the Drummondville Voltigeurs on Tuesday in which Poulin netted his third hat-trick this season before adding a pair of assists en route to a 6-4 victory and first-star honours. For his efforts, Poulin was recognized as the Ultramar QMJHL Player of the Week.

Joining Poulin up front is his Phoenix teammate Felix Robert who wrapped up the week with four goals and five assists for nine points over a trio of appearances. Robert’s top performance of the week also came versus the Voltigeurs as he ended the night with two goals and two assists, helping him earn second-star honours and tying his best single-game total during his current 11-game point streak.

Rounding out the forward ranks is Washington Capitals first-round pick Connor McMichael of the London Knights who tallied three goals and four assists for seven points over two contests, bringing his current point streak to 12 games. Against the Windsor Spitfires on Friday, McMichael notched his sixth hat-trick of the season plus one assist to help his squad to 7-4 victory in which he was recognized as the game’s first star. For his efforts, McMichael was named the OHL ‘On the Run’ Player of the Week.

On the blue line, Knights defenceman and San Jose Sharks first-round pick Ryan Merkley shined with a six-point showing and hit the 250 career point plateau with one goal and five assists through two appearances. Facing the Sarnia Sting on Saturday, Merkley decorated the scoresheet with three points including the eventual game-winning goal plus two assists to guide London to a 5-2 road victory in which he was named the game’s first star.

Also on the back end is Moncton Wildcats rearguard and Los Angeles Kings prospect Jordan Spence whose week counted two goals and four assists for six points through three appearances. Against the Charlottetown Islanders on Saturday, Spence matched a season-high of three points as he put up a trio of assists to guide the Wildcats to a 5-1 victory in which he earned third-star recognition.

In the blue paint, Prince Albert Raiders netminder Max Paddock impressed over two appearances as he came away with a pair of victories coupled with a 0.50 goals-against average and .972 save percentage. Paddock’s top showing came against the Victoria Royals on Wednesday as he turned aside all 17 shots en route to a 3-0 victory that marked his third shutout of 2019-20. In all, Paddock wrapped up the week in turning aside a combined 35 of 36 shots, helping him earn recognition as the WHL Eli Wilson Goaltending Goaltender of the Week. 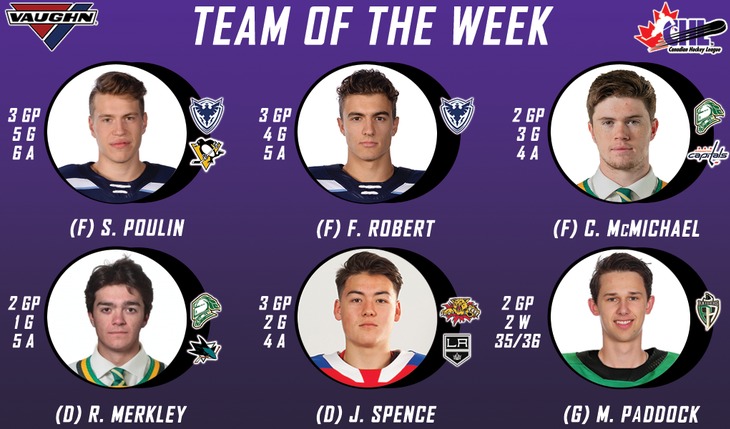