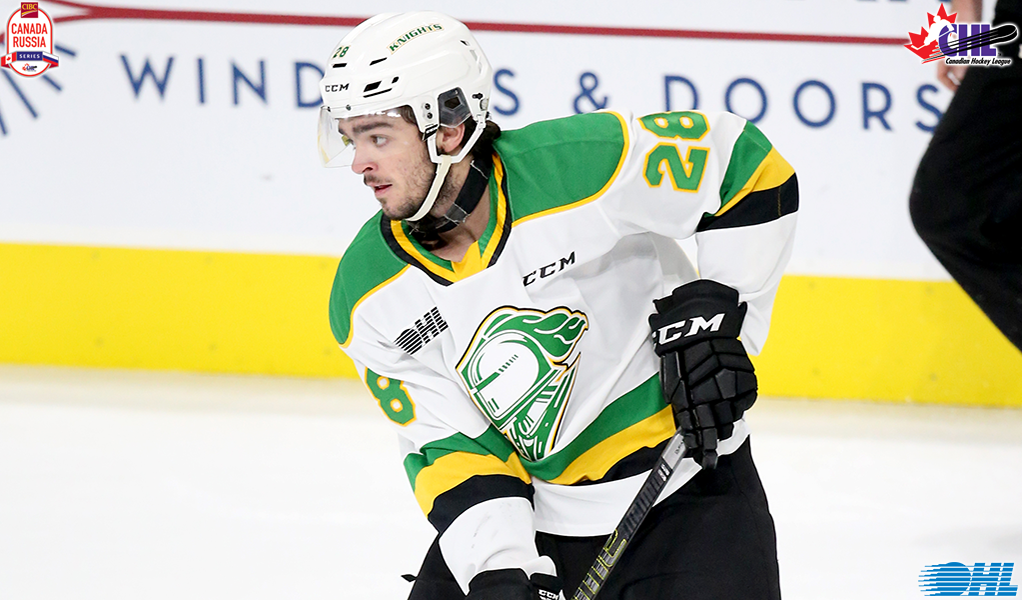 Ryan Merkley has the opportunity of a lifetime.

In joining the London Knights earlier this season, the budding blue-liner became part of a highly regarded program that has qualified for the playoffs each of the past 19 seasons, with a run that counts three OHL championships plus a Memorial Cup title in the past eight years, in addition to countless talented alumni who have graduated to the NHL ranks.

“London is the top of many guys’ list for sure,” Merkley told the Canadian Hockey League in reflecting on the late September deal. “It’s exciting. They have a great team. Playing with (Connor) McMichael, (Liam) Foudy, (Alec) Regula, (Jonathan) Gruden … it’s an awesome group.”

With the Knights, Merkley also has the chance to play under the legendary junior hockey duo of general manager Mark Hunter and head coach Dale Hunter, who have revitalized the franchise since taking ownership in 2000. This Christmas, the pair will have the chance to put their success under the national spotlight as they guide the selection for Team Canada at the 2020 IIHF World Junior Hockey Championship.

Naturally, patrolling the Knights’ blue line offers Merkley a regular opportunity to audition for the national stage, and the chance to again represent the Great White North since last doing so at the 2018 IIHF U18 World Championship. The stakes will certainly be raised when Merkley also joins Hunter in starring for Team OHL at the 2019 CIBC Canada Russia Series.

For Merkley, the game plan is simple, in continuing to bring his brilliant offensive abilities – he has tallied 18 points counting four goals and 14 assists across 14 appearances this season – while simplifying his defensive game and staying responsible in his own end of the rink.

“I’m playing more honest, playing safer in the ‘D’ zone,” Merkley described. “I’m making plays when they are there and not trying to force it all the time.”

Originally chosen with the top pick in the 2016 OHL Priority Selection, Merkley made an immediate impact upon making the jump to the junior ranks the following season as he posted 55 points in 62 games with Guelph to lead all freshmen in scoring and claim the Emms Family Award as the OHL Rookie of the Year.

It’s that sort of incredible offensive upside that always makes Merkley a tantalizing presence on the blue line, attributes that surely led to his 21st overall selection by the San Jose Sharks in the 2018 NHL Draft.

“We know how special he is in the offensive zone, but (Merkley) has to be a very good neutral-zone player,” Sharks director of scouting Doug Wilson, Jr. told NHL.com’s Ross McKeon. “He’s got very good feet. If he can close in the neutral zone, angle plays toward the boards using his stick, then we can get the puck going up north faster.”

The message is apparent as Merkley, 19, aims to be the next Knights graduate turned NHL superstar, a group that counts Max Domi (Montreal Canadiens), Bo Horvat (Vancouver Canucks), Matthew Tkachuk (Calgary Flames), and Mitch Marner (Toronto Maple Leafs) among its recent alumni who have gone on to make waves at the highest level.

“It’s been good,” Merkley concluded. “(Dale Hunter) cares about effort, so I show him my commitment to defense, playing hard, and giving it (my all) every shift, so that’s what I’m trying to do and trying to do my best.”