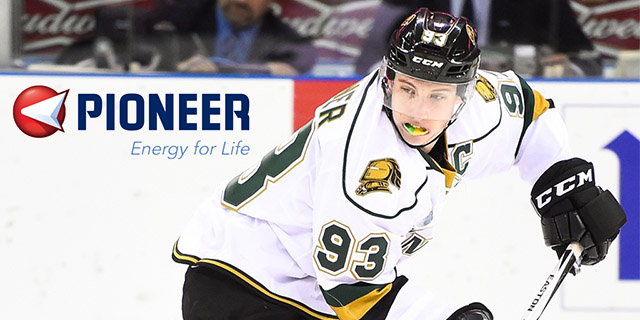 Toronto, ON – The Ontario Hockey League today announced that Toronto Maple Leafs prospect Mitch Marner of the London Knights is the Pioneer Energy OHL Player of the Week for the playoff week ending April 10 after leading the league with seven points in two games scoring twice with five assists and a plus-minus rating of plus-5.

Marner delivered back-to-back multi-point performances helping the Knights earn a pair of victories over the Kitchener Rangers taking a 2-0 series lead in the Western Conference Semi-Finals.  He scored a goal and two assists in Game 1 on Friday night as part of the 6-3 victory, then tallied a shorthanded marker and three assists in Sunday’s 5-3 win in Game 2.  The series now shifts to Kitchener with Game’s 3 and 4 set for Tuesday and Thursday night.

The 18-year-old from Thornhill, ON, has now taken over the playoff scoring lead with 19 points in six games including six goals and 13 assists.  Marner was a first round pick of the Knights in the 2013 OHL Priority Selection and was later chosen fourth overall by the Maple Leafs in the 2015 NHL Draft.  This season he finished third in regular season scoring with 116 points in 57 games eclipsing the century mark for the second straight season.  Marner also surpassed significant career offensive milestones this season collecting his 200th career assist and 300th career point.

Watch video highlights of Marner and the Knights against the Rangers in Game 1 and Game 2.

Also considered for the award this week was fellow Knight and last week’s recipient Matthew Tkachuk with a goal and five assists for six points in two games, and Justin Scott of the Barrie Colts with four goals and one assist for five points in two games including a hat-trick performance in a Game 7 victory over Mississauga.  In goal, Carolina Hurricanes prospect Alex Nedeljkovic backstopped the Niagara IceDogs to a 3-0 series lead against the Kingston Frontenacs with 110 saves along with a goals-against-average of 2.40 and save percentage of .932.