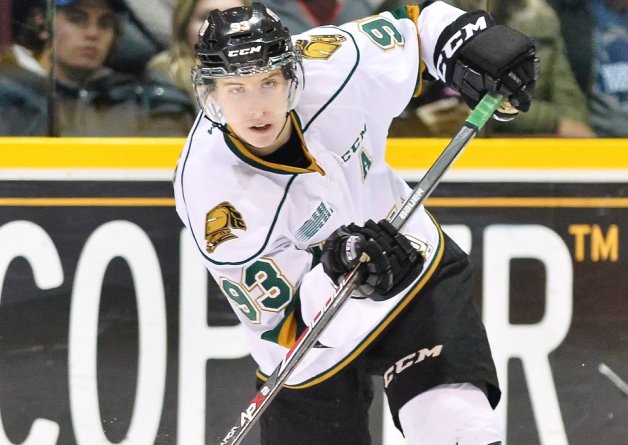 Toronto, ON – The Ontario Hockey League today announced that 2015 NHL Draft prospect Mitchell Marner of the London Knights is the Pioneer Energy OHL Player of the Week for the week ending February 22 after recording 10 points in three games including three goals and seven assists with a plus-minus rating of plus-4.

Marner earns the award for the third time after becoming the first OHL player to record 100 points this season, and the first Knight since John Tavares in 2008-09.  The league’s top scorer hit the century mark on Family Day by scoring a first period goal and later setting up Matt Rupert’s powerplay marker to claim first star honours in a 4-1 win over the Saginaw Spirit.  On Friday night, Marner assisted on all three Knights’ goals in regulation time before the club squeezed past the top ranked Oshawa Generals 4-3 in a shootout.  Marner finished his week recording his fifth five-point game of the season with two goals and three assists as first star of a 7-4 road win over the Sarnia Sting lifting the Knights back into third place in the Western Conference standings.

Marner, a 17-year-old from Thornhill, ON, is a top prospect for the 2015 NHL Draft and was listed seventh among North American skaters by NHL Central Scouting in last month’s Midterm Rankings.  Now with 108 points in 52 games, Marner is the first player since former Ottawa 67’s star Tyler Toffoli in 2010-11 to earn the weekly honour three times during regular season action.

Watch video highlights of Marner and the Knights against the Spirit, Generals, and Sting.

Also considered for the award this week was Vancouver Canucks prospect Jared McCann of the Sault Ste. Marie Greyhounds with four goals and seven assists for 11 points in four games, and New Jersey Devils prospect Joseph Blandisi of the Barrie Colts with nine points in three games scoring six goals and three assists.  In goal, Carolina Hurricanes prospect Alex Nedeljkovic of the Plymouth Whalers made 117 saves posting a 2-1-0-0 record with a goals-against-average of 1.68 and save percentage of .959.