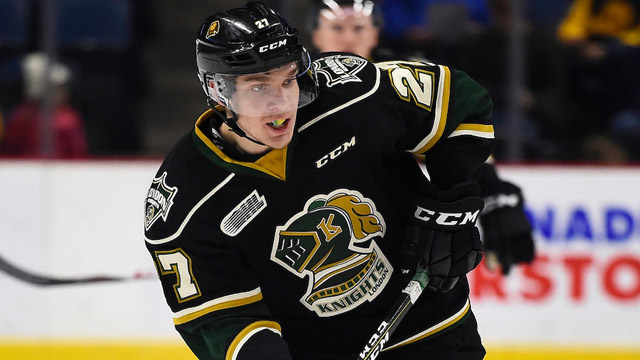 London, ON – The London Knights have announced their team captain along with the club’s alternate captains which will lead the team in the 2017-2018 season.  Robert Thomas has been named captain with Sam Miletic, Max Jones, Cliff Pu, and Evan Bouchard serving as alternate captains.

Thomas is currently in the midst of his third season as a London Knight.  The centre was originally selected by the Knights in the second round of the 2015 OHL Priority Selection.  The Aurora, Ontario native was drafted in the first round, 20th overall, by the St. Louis Blues in last year’s NHL Entry Draft.

“We are very proud of what Robert has been able to do during his career with the London Knights”, said Knights’ General Manager, Rob Simpson.  “He exemplifies everything it means to be a London Knight; dedication, hard work, and excellence.  Robert has been a great leader on and off the ice, and we look forward to him excelling in this role.”

As has been customary in previous years, the team’s captains were selected by his peers.

“We are happy to have continued on this tradition of the team selecting the leadership group this season,” continued Simpson.  “This process shows the trust and respect everyone has in that room for these outstanding young men.”

Miletic, a native of Bloomfield Hills, Michigan, is also in his third season with the London Knights.  The overage left winger was originally drafted in the 15th round, 295th overall in the 2013 OHL Priority Selection.  During the offseason, Miletic signed an entry level contract with the Pittsburgh Penguins.

Pu, who is currently in his fourth year in London, came to the Knights via trade, from the Oshawa Generals.  The Richmond Hill native was the team’s leading scorer from last season.  Pu was drafted by the Buffalo Sabres in the third round of 2016 NHL Entry Draft, 69th overall.

Bouchard, a standout defenseman, is also in his third year with the Knights.  The Oakville, Ontario native is currently in his NHL draft year, and is seen as an A rated prospect, expected to be drafted in the first round of this year’s NHL Entry Draft.  Bouchard was originally selected by the Knights in the first round of the 2015 OHL Priority Selection, 17th overall.

“Having Robert, Sam, Max, Cliff, and Evan as our captains gives us a strong leadership group of complementary players on and off the ice”, said London Knights’ Head Coach Dale Hunter.  “With a dressing room full of leaders on top of the named captains, having Robert, Sam, Max, Cliff, and Evan represent the team on the ice and out in the community is something the entire organization is proud of.”