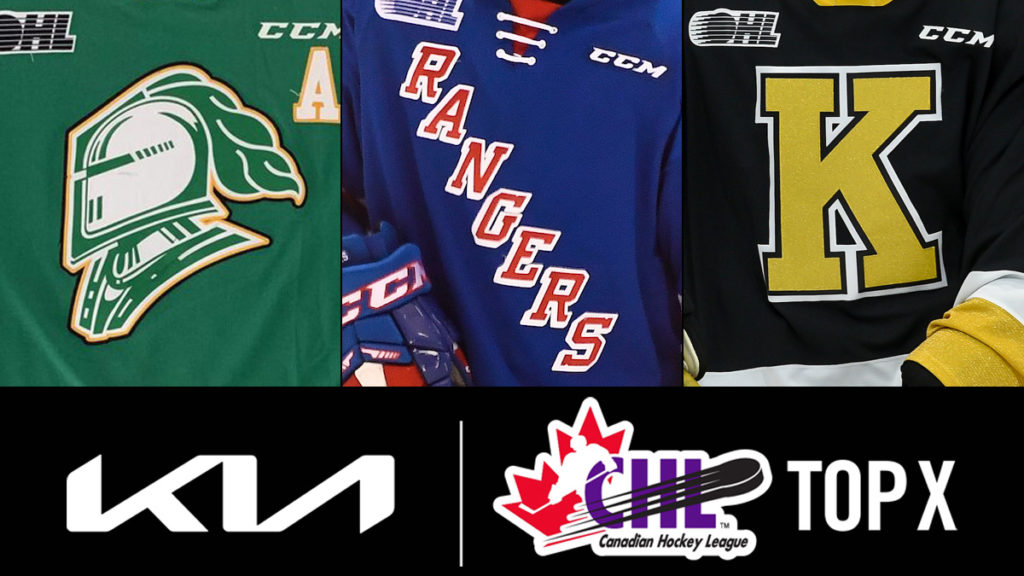 Toronto, Ont. – The Canadian Hockey League announced today the Week 4 edition of the Kia CHL Top-10 Rankings for the 2021-22 season.

Following the Quebec Remparts, Winnipeg ICE and Acadie-Bathurst Titan, the undefeated 6-0 London Knights rise one spot to number four in this week’s rankings. The Knights won their lone game of the weekend, defeating the visiting Owen Sound Attack 2-1 on Friday as Brett Brochu turned aside 36 of 37 shots and Nashville Predators prospect Luke Evangelista scored the shorthanded game winner early in the third period. The Knights also had Dallas Stars prospect Antonio Stranges in their lineup for the first time this season after the shifty winger returned from injury. London hits the road to face Owen Sound on Wednesday before a home date with the Sarnia Sting on Friday night.

A weekend split saw the Kitchener Rangers enter the Top-10 for the first time this season, defeating the Windsor Spitfires in a thrilling shootout finish on Friday as Pavel Cajan stood tall in the crease and rookie Carson Rehkopf netted the winner in a 3-2 decision. The Blueshirts fell 4-2 to the rival Guelph Storm on Sunday to see their undefeated start come to a halt as they own a mark of 5-1-0-0 entering a week with a Wednesday/Friday home-and-home against the Soo Greyhounds before visiting the Windsor Spitfires on Saturday.

The Kingston Frontenacs keep hanging around inside the Top-10, falling one spot to tenth despite a 6-1 triumph over the Peterborough Petes at home on Friday. Lucas Edmonds scored two more goals in the win and now leads the team with 12 points (5-7–12) over six games. Dallas Stars prospect Francesco Arcuri recorded a career-high four points and has eight (3-5–8) over his first four games while overage centre Jordan Frasca has nine (3-6–9) to his credit through six games.

Netting four out of a possible six points in a three-in-three road trip last weekend has the Ottawa 67’s as an honourable mention this week. The Barber Poles fell 5-2 to the Mississauga Steelheads on Friday before taking a 3-0 shutout win over the Barrie Colts in Saturday’s CHL on CBC broadcast. St. Louis Blues prospect Will Cranley stopped all 28 shots he faced for his fifth career shutout. Ottawa wrapped up the weekend in thrilling fashion, scoring three third period goals in under a minute en route to stunning the Oshawa Generals 5-4 in a shootout on a winner from Brenden Sirizzotti. 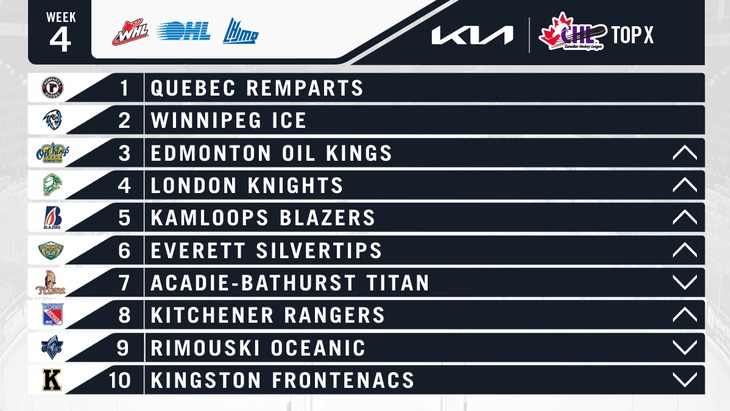 For further analysis on the Week 4 edition of the Kia CHL Top 10 Rankings, visit CHL.ca.