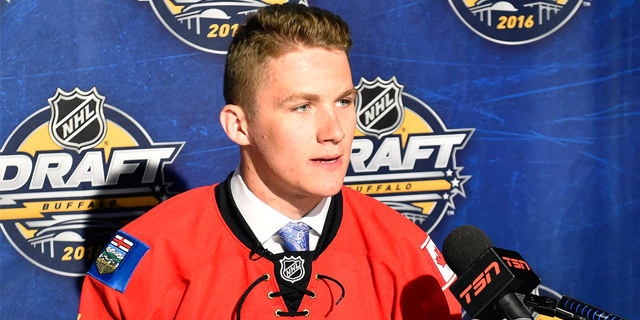 CALGARY, AB — The Calgary Flames announced today that they have signed 2016 NHL first round draft pick Matthew Tkachuk to a three-year, entry-level contract.

Tkachuk, the sixth overall pick in June’s NHL Draft, just finished a Memorial Cup-winning season with the London Knights where he scored the overtime winner in the championship final. The 18-year-old left winger recorded 107 points (30G, 77A) in his first regular season with London. In the OHL’s postseason, Tkachuk added another 40 points (including a league-best 20 goals) to help the Knights win 17 consecutive games en route to the OHL and Memorial Cup titles.

The Scottsdale, AZ native also captured a bronze medal for the United States squad at the 2016 IIHF World Junior Hockey Championships where he co-led the Americans with 11 points in just seven games. He added the bronze to the pair of gold medals that he collected with Team USA at the 2015 World Under-18s and the 2014 World Under-17s.