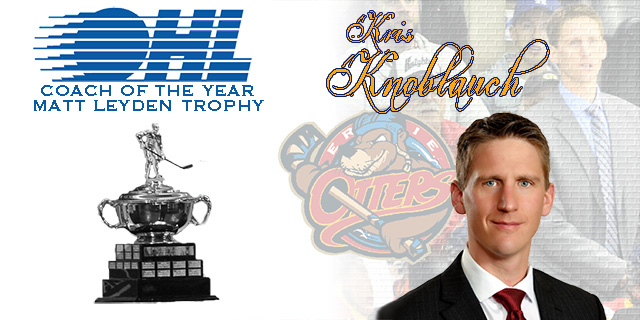 Toronto, ON – The Ontario Hockey League today announced that Kris Knoblauch of the Erie Otters is the 2015-16 recipient of the Matt Leyden Trophy awarded annually to the OHL’s Coach of the Year.

Knoblauch guided the Otters to an OHL-best 52-15-1-0 record earning a second straight Midwest Division crown along with the club’s first Hamilton Spectator Trophy as regular season champions since 2001.

“I don’t think anyone’s ever won this award without a general manager or scouting staff gathering a lot of talent, but also more importantly is having good leadership within your room,” Knoblauch said. “I think our older players who have been with us a long time, Nick Betz and Devin Williams, or our captains like Dylan Strome, they are probably more responsible for the team having the success that we had this year.”

“This is a well-deserved honour,” said Otters General Manager Dave Brown. “Kris is a great teacher, excellent mentor and exceptional communicator and I think the results speak for themselves with what he has accomplished during his tenure with the Otters.”

Prior to joining the Otters, the 37-year-old from Imperial, Saskatchewan, served behind the bench for the Western Hockey League’s Kootenay Ice as an assistant coach from 2007-10 before taking over head coaching duties from 2010-12 winning the WHL’s Ed Chynoweth Cup as WHL Champions in 2011.  He began his major junior coaching career in 2006-07 serving as an assistant coach for the WHL’s Prince Albert Raiders.  Knoblauch’s playing career included four years in the WHL from 1995-99 before competing five seasons with the University of Alberta from 1999-2004 winning a CIS National Championship in 2000.  Knoblauch was a seventh round pick of the New York Islanders in the 1997 NHL Entry Draft.

The Matt Leyden trophy has been awarded annually to the OHL’s Coach of the Year as selected by his peers since 1972.  The award is in recognition of the contributions of Matt Leyden, past President of the Ontario Hockey Association from 1965-67, and former manager of the Oshawa Generals who spent more than 50 years with the team.

In a first round of balloting, teams vote for the top coaches, within their own conference. The top three nominees from both the Eastern and Western conferences are declared finalists. A second round of voting is then conducted on a league wide basis where teams vote for any of the six finalists. At no time during the voting can a team vote for their own candidate. Coaches receive five points for a first place vote, three points for a second place vote and one point for a third place vote.

The Matt Leyden Trophy will be formally presented to Knoblauch at the 2015-16 OHL Awards Ceremony taking place on Tuesday June 7 at the Hockey Hall of Fame in Toronto.  He will be the OHL’s nominee for Canadian Hockey League Coach of the Year to be announced on Saturday May 28 as part of the 2016 MasterCard Memorial Cup.