Otters’ Kyrou forging own path ahead of 2022 NHL Draft 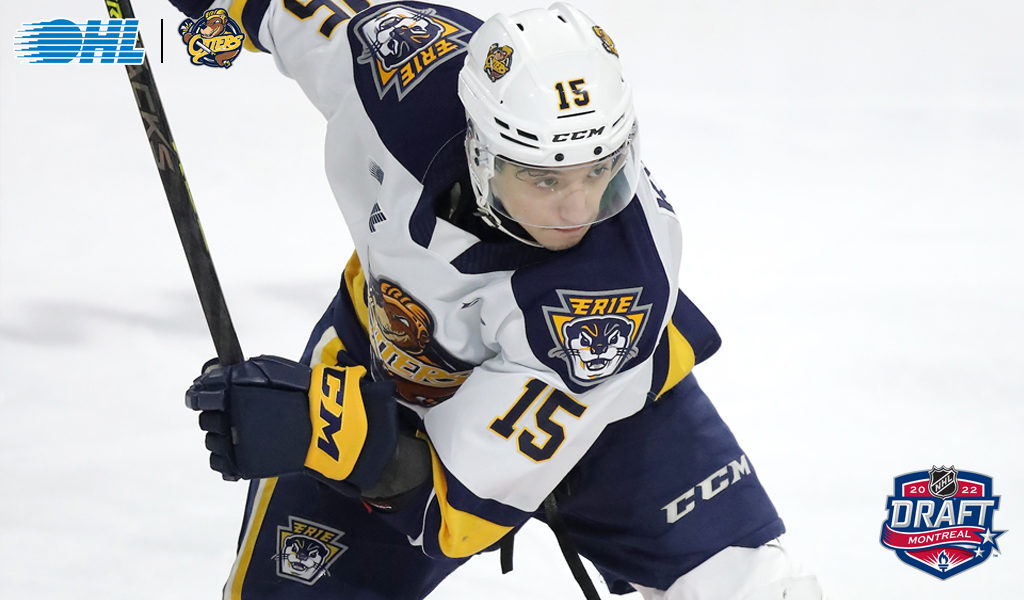 In his fourth NHL season, Jordan exploded for a career-high 75 points with the St. Louis Blues and was named an NHL All-Star for the first time in his career.

His younger brother, Christian, starred in his first full OHL campaign with the Erie Otters where he recorded 60 points, the fourth most among all blueliners. His 18 goals were tied for the third most among OHL defencemen.

“Him watching my games and me watching his, we’re rooting for success for each other,” Christian said. “We feed off our success. We’re really proud of each other and we can’t wait to see what the future holds for each other.”

The results are in for @ChristianKyrou, as the #48 ranked @NHL Draft Prospect (NA) completes his tests at the 2022 Scouting Combine.

For Christian, the next step of his future takes place this week. Kyrou is the 48th ranked North American skater according to NHL Central Scouting ahead of the 2022 NHL Draft that will be held in Montreal July 7-8.

“It’s exciting,” he said. “I’ve waited my whole life for this moment. Whatever team selects me, I’m going to be honoured to go there.”

Of course, Jordan has been through this. The Blues selected him 35th overall in 2016 as a member of the Sarnia Sting.

“It’s good to have someone who’s been through everything and to let you know what’s going to happen next,” Christian said. “He’s taught me a lot this year, through my draft year, and I’m so grateful.

“He always has great advice for me, he’s been through it and he knows what it’s like. I’m grateful for him.”

Kyrou played 21 games in 2019-20 with the Otters but lost the entire 2020-21 campaign due to the Covid-19 pandemic. He described himself as a late bloomer and spent the lost season in the basement where he had a shooting range and training facility.

“It worked out well for me,” he said.

“It’s been surreal, not a lot of people get to come here. Lot of development last years, I worked hard. Just grateful for the opportunity.”

Ahead of his performance aspect in the @NHL 2022 Scouting Combine, @ChristianKyrou reflects on what’s lead him here. #OttersNation🦦 pic.twitter.com/M1UGoWDAyt

In his return to action, Kyrou exploded in 2021-22. His 60 points were just three off of the team lead while his 17 power play assists led the team. With 193 shots, he placed tied fifth among all OHL d-men.

“This year I stepped up and [was] scoring goals for the team,” Kyrou said. “I felt I had to do that if we wanted to win this year. I’m comfortable shooting the puck, I feel like I can create goals and I trust my shot.

“I think I have an elite shot and I will shoot the puck when I need to.”

If you sense a level of confidence, you wouldn’t be mistaken. And that should be encouraged. His season was recognized by Hockey Canada who named him to the National Junior Team summer development camp with an eye on the 2023 World Juniors.

“It takes confidence I feel like to play the way you want to play,” Kyrou said. “Obviously, I developed more confidence and more of a role for my team this year moving forward into the season.

“I tried to step up and I was ready to go this season.”