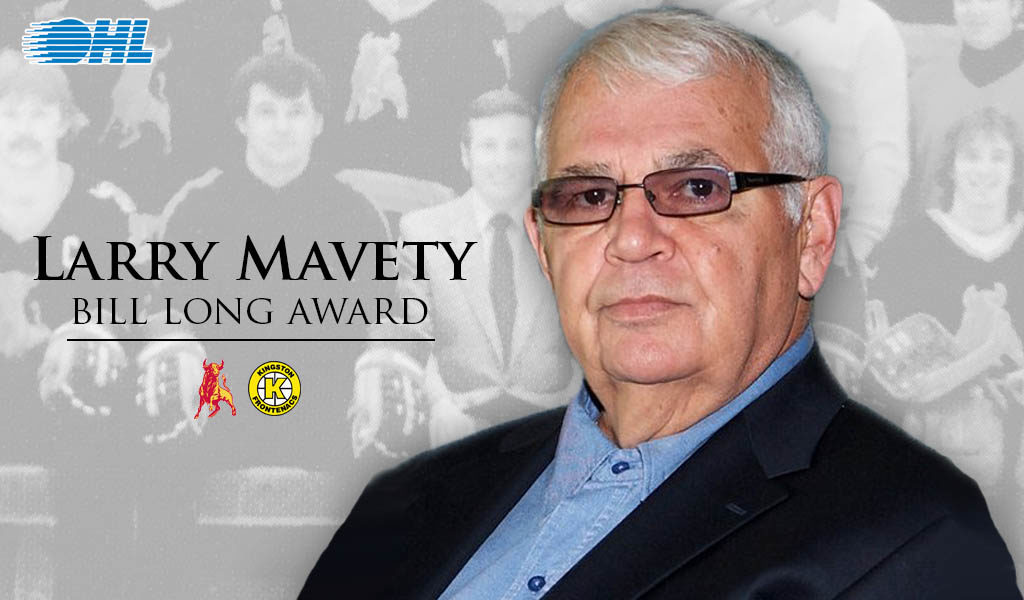 Toronto, ON – The Ontario Hockey League is proud to announce that Larry Mavety, a long-time OHL coach and executive, is the recipient of the Bill Long Award for Distinguished Service presented in recognition and appreciation of outstanding contributions to the OHL.

The award was presented Wednesday night at the annual OHL Board of Governors meeting in Niagara-on-the-Lake.

“To dedicate more than three decades to the growth and development of our league and its players the way Larry Mavety has done as a coach and general manager is remarkable,” said OHL Commissioner David Branch. “It is only fitting that he be recognized for not only his longevity, but his passion, influence, and outstanding contributions to the league and to our game.”

Known as a player’s coach, Mavety brought the hard-nosed style and pursuit of excellence he demonstrated during a lengthy playing career behind the bench where he always kept the best interests of his players at the forefront. Throughout his time in the OHL he contributed to the development of eventual NHL talent in Darren McCarty, Bryan Marchment, Daniel Cleary, Dan Quinn, Richard Park, Anthony Stewart and Mike Zigomanis among several others.

‘Mav’ is commencing his 17th year representing the Frontenacs as an Alternate Governor at the annual OHL Board of Governors Meetings.

The Bill Long Award now has 21 recipients since initiated in 1989 to commemorate the efforts and contributions of Bill Long during his days in the Ontario Hockey League, spanning over three decades as a coach and manager of the Niagara Falls Flyers, Ottawa 67’s and London Knights.  Past recipients of the award are two of Mavety’s former team owners including Kingston’s Wren Blair (1997) and Belleville’s Dr. Robert Vaughan (1993).  Peterborough Petes long-time Director Pat Casey (2016) and Owen Sound Attack Business Manager Ray McKelvie (2013) are the two most recent award recipients.