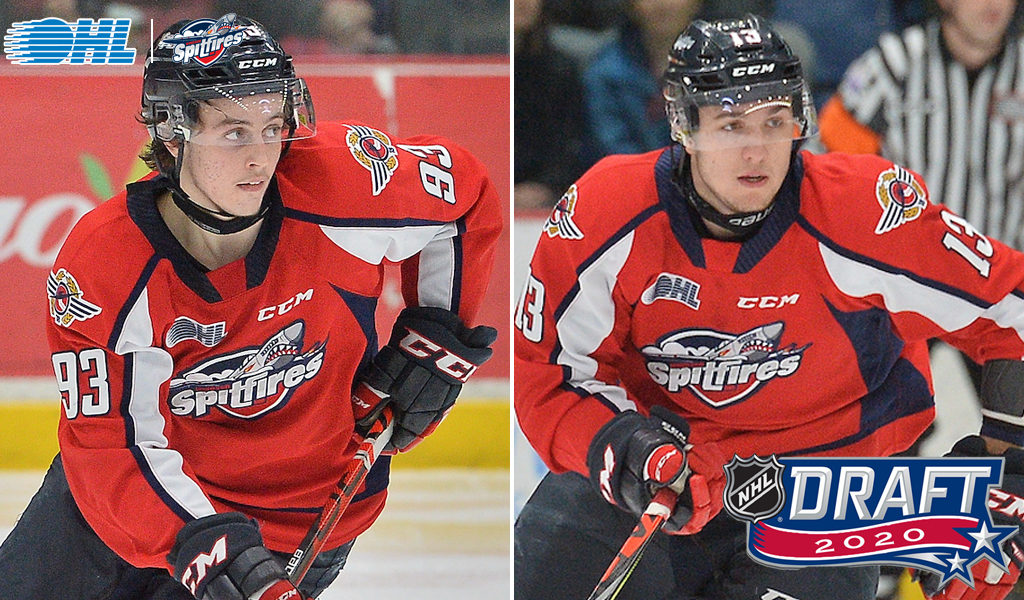 It’s been an important year for a couple of Windsor Spitfires teammates. A year of growth, too.

Both first round OHL draftees who came into a young, rebuilding Spitfires squad with a lot of opportunity to play, Jean-Luc Foudy and Will Cuylle are now highly regarded prospects on the NHL Draft radar, ranked 33rd and 34th respectively by NHL Central Scouting.

The progression of both players has impressed Spitfires head coach Trevor Letowski, who spoke to their strengths and improvement back in January as the two skaters geared up for the Kubota CHL/NHL Top Prospects Game.

“They both had a lot of opportunity to play and they both had real good seasons as 16-year-olds in the league, so that was a real good start for both of them,” he said.  “Then you come into this year, which is a really important year for them, and our team has grown a lot so it’s a different feel. They certainly have to work and earn their ice time a little bit more than they did last year. I think that’s been really good for both of them.”

A power forward with an impressive shot, Cuylle has been praised for his physical, energetic style of play; a style he’s compared to that of Dallas Stars captain Jamie Benn. Much of that praise has come from Letowski.

“He’s just a straight ahead physical player that shoots the puck like a pro. It’s kind of a simple style but it’s really effective when he’s skating,” said Letowski of Cuylle’s playing style.

Looking ahead to the #NHLDraft, @Sportsnet‘s Sam Cosentino speaks to @SpitsHockey winger @WillCuylle‘s size, strong skating ability and #NHL potential as a highly touted prospect with a game similar to that of @tom_wilso.#OHL Prospect Primer 🏒: https://t.co/i2XYCIzeAg pic.twitter.com/zCqOHl4G0P

Heading into his draft year, the Toronto native made a point of improving his skating and acceleration in order to elevate his game.

“I think Willy started fairly slowly, he puts a lot of pressure on himself. I think they all do. It was kind of wearing on him and we talked a lot to him about just playing and moving his feet,” continued Letowski. “He’s really picked his game up and now he’s playing the best hockey he ever has.”

Foudy, a dynamic skater with an excellent shot, has also been a quality asset for the team with qualities that excite Letowski.

“What I like most about him as his coach is his compete level, he’s kind of a puck magnet,” he said of the centreman. “He comes out of the pile with pucks almost every time and he’s not a big guy but he just finds a way to do that, it’s kind of a special skill that he has. He’s kind of a self breakout machine and he just generates a ton of offense with his legs. He’s always been able to do it off the rush and now he’s starting to do that in the offensive zone. ”

That ability to make plays off the rush is, Foudy thinks, an underrated part of his game.

“I think I read the game really well and I think that’s a little underrated part of my game. Everyone just says speed but that’s just part of it,” said the Scarborough native.

A highly athletic competitor with some of the fastest feet in the #OHL, @SpitsHockey speedster Jean-Luc Foudy (@jlfouds) is 33rd on #NHL Central Scouting’s North American Rankings.

Like Cuylle, Foudy showed a level of growth over his sophomore season that impressed his coach.

“With Jean-Luc, I would say he has grown as well. He has some issues in his game, I would say he can tend to hold on to the puck a little bit too long and he’s really worked on that. He’s obviously a dynamic skater, everybody knows that about him.”

Both bring an offensive boost to the Spits’ lineup that helped them round out the 2019-20 season third in a tough West Division with a 34-20-8-0 record.

Off the ice, their energy and personality has been a welcome addition to the room.

“Jean-Luc has a lot of energy, he’s kind of a goofy guy. I think he likes to bug his teammates. He’s pretty loose. I like it, if that’s away from the ice, obviously. And then when the practices start and the games, he competes so that’s all you can ask for. He keeps it pretty light away from things,” said Letowski.

“Willy’s a good teammate, too. He’s pretty loose. He’s not maybe as loud as Jean-Luc, he’s a little bit more reserved day to day, but he likes to have fun too. And then when it’s time to get into the gym or onto the ice, that’s what I like about both of them, they like to work too.”

While both teammates continue to await the big day, they’re happy to be sharing the NHL Draft experience together.

“He [sat] right beside me in the room. We’re pretty close so we can talk here and there. If you have a bad game, he might crack a joke and lighten the mood,” Foudy said of his teammate. “It’s nice to have a familiar face.”

“Obviously it’s really cool being able to experience it with him,” Cuylle said in agreement. 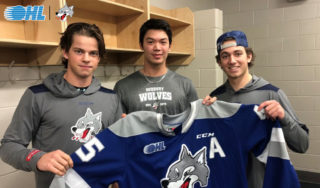