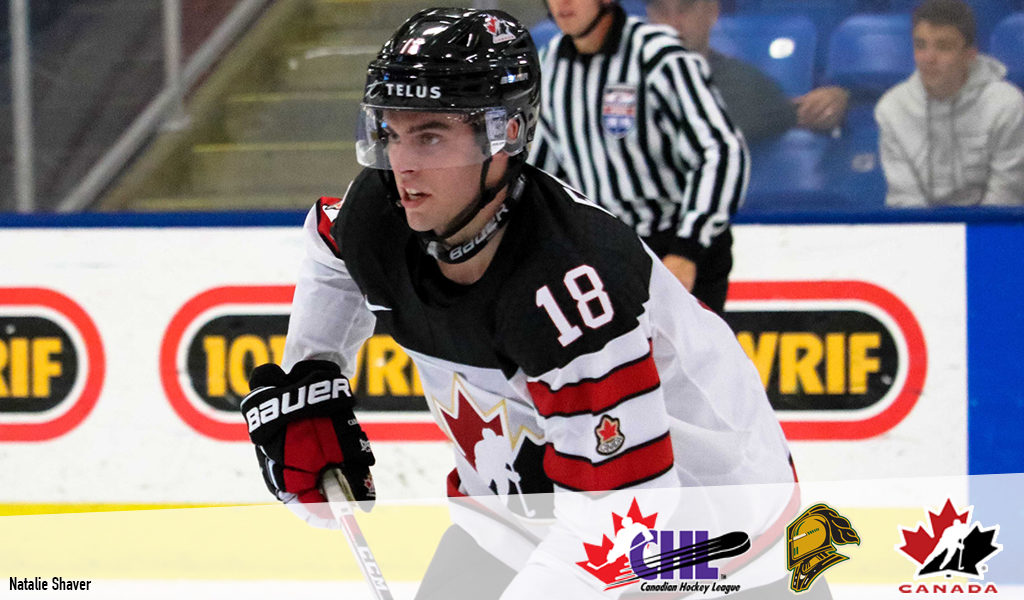 Chief among them was bench boss Dale Hunter, who doubles as Foudy’s head coach in London, while others like Knights general manager Mark Hunter, part of the Program of Excellence management group, and fellow forward Connor McMichael rounded out the list.

For Foudy, it provides a level of familiarity for what is to come when he steps on the ice in his Team Canada sweater in his bid to return to the national stage this December at the 2020 IIHF World Junior Hockey Championship.

“I know what to expect being with (the Hunters) in London for three years now,” Foudy told the Canadian Hockey League. “You’re not really nervous asking anything because he’s your head coach normally, so you’re a bit more comfortable out there.”

Still, it’s up to Foudy to earn his spot on the team, and there will be no playing favourites simply because he previously participated in marquee programs like the U17s and the 2018 Hlinka Gretzky Cup or because he is a known commodity to those piecing together the final roster.

“They know that I am fair,” coach Hunter said earlier this week. “If they deserve to be here, they will make the team, and if they don’t, they won’t. They are going to have to lay it all out on the line because we have great competition out here. You have to show that you belong here.”

Excited to sign my first NHL contract with the @BlueJacketsNHL!! Thank you to everyone who helped me along the way!! pic.twitter.com/1s4XUQmp0l

Nevertheless, that doesn’t mean Hunter hasn’t been helpful in offering up advice to his player. A speedy skater, Hunter often instructs Foudy to use his best asset in order to impress, particularly as he aims to make the world junior squad after missing out a year ago.

“Dale is always telling me that using my speed is the biggest thing. He wants me to come here and set the pace, use my speed as best as possible, and move my feet the whole time,” Foudy detailed. “It’s always something I’ve had to do my whole life. Skating is one of my best factors, so it’s something I am going to try to do (at camp).”

A Toronto native, Foudy emerged in the 2017-18 season with the Knights, putting together a 24-goal, 16-assist campaign that saw him notch 33 points in the final 30 games, helping him raise his draft ranking from 91st at the midterm to his eventual first-round selection by the Columbus Blue Jackets.

Foudy impressed talent evaluators then and hopes to do the same with the Hockey Canada brass, with his performance in camp practices and exhibitions offering up the latest assessment, while his play in the upcoming CHL campaign and key events like the CIBC Canada/Russia Series will also be part of the evaluation as Team Canada formulates its final roster.

“The whole staff is there (at the Canada/Russia Series) for Hockey Canada,” Foudy added. “They’re scouting, they’re watching the games. It’s all of the top guys from all of the leagues, going against the best of the best, and playing with the best, so it’s going out there and showing what you have and trying to play your game.”

Coupled with his late cut from last year’s world junior squad, there is no shortage of motivation as Foudy aims for a spot with the 2020 edition.

“I was really excited for (last year’s selection camp),” Foudy explained. “Going to that in Kamloops, it was a really tough camp. I thought I played pretty well. Unfortunately I didn’t make (the team), but it was still a good learning experience going into this year.”