Live in the Moment: Forhan shares his OHL Cup experience 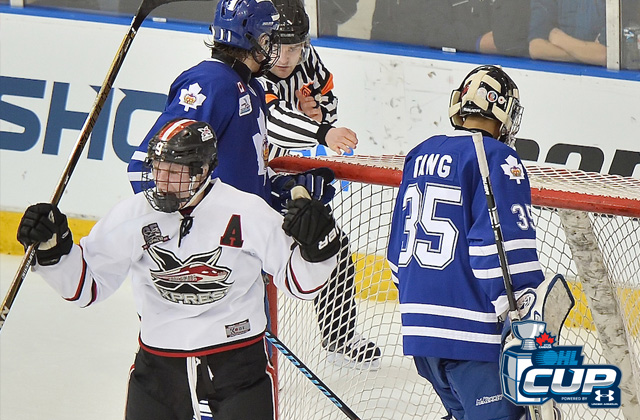 It was a moment frozen in time.

Rhys Forhan slipped a puck under the pad of Toronto Marlboros goaltender Elliott Tang 7:17 into the second overtime, giving the York-Simcoe Express their first OHL Cup title since 2004 with his second goal of the night.

It wasn’t the nicest looking goal as a delayed reaction from the official on the play led to a moment of uncertainty for all involved. Once a goal was signalled, a look of bewilderment came upon Forhan as teammate Robbie Cranston was first on the scene to dog-pile onto the hero.

“I still smile when I think about it.”

A native of Bradford, Ont., Forhan was selected by the Troops in the second round of the 2016 OHL Priority Selection and is wrapping up his first season in the OHL, one that has yielded a couple goals and six assists in 44 games.

“I’ll be honest, it’s a huge jump,” he said of the transition. “You go from being the big fish to playing against bigger, stronger, more experienced guys and you make your share of mistakes. What’s most important is how you learn from those and work hard at getting better.”

Several of Forhan’s former Express teammates have also made the leap to the OHL. Blueliners Carter Robertson (Ottawa 67’s) and Justin MacPherson (Niagara IceDogs) are regulars while forward Richard Whittaker (London Knights) has enjoyed a handful of games in the ‘O’.

“That bond we share will never go away, even when we’re on opposite teams,” said Forhan. “What made us such a great team was our friendship together. There were no cliques and we really were a brotherhood. It’s fun to talk about those memories when we have the chance.”

Said with a wisdom beyond his 17 years, Forhan  offered his best advice to members of the Toronto Nationals and Mississauga Reps lacing up the skates in the biggest, and for some the final game of their minor hockey careers tonight.

“Live completely in the moment. It’s the experience of a lifetime, but it flies by. A few weeks will pass and life will continue, but the memory of that night will never go away.”

“It’s important to make the most out of the good and the bad,” he continued, acknowledging that for every Championship game there’s a winner and a loser.

“For the guys that don’t win, be thankful for the experience because a lot of guys never get the chance to even make it into the OHL Cup.”

Wise words from a young man who, no matter where the game takes him, will always have something to smile about.

The 2017 OHL Cup Powered by Under Armour Championship Final between the Toronto Nationals and the Mississauga Reps will be broadcast live on Sportsnet Ontario at 6:30pm.