Locke honoured as U SPORTS Academic All-Canadian in Quebec City 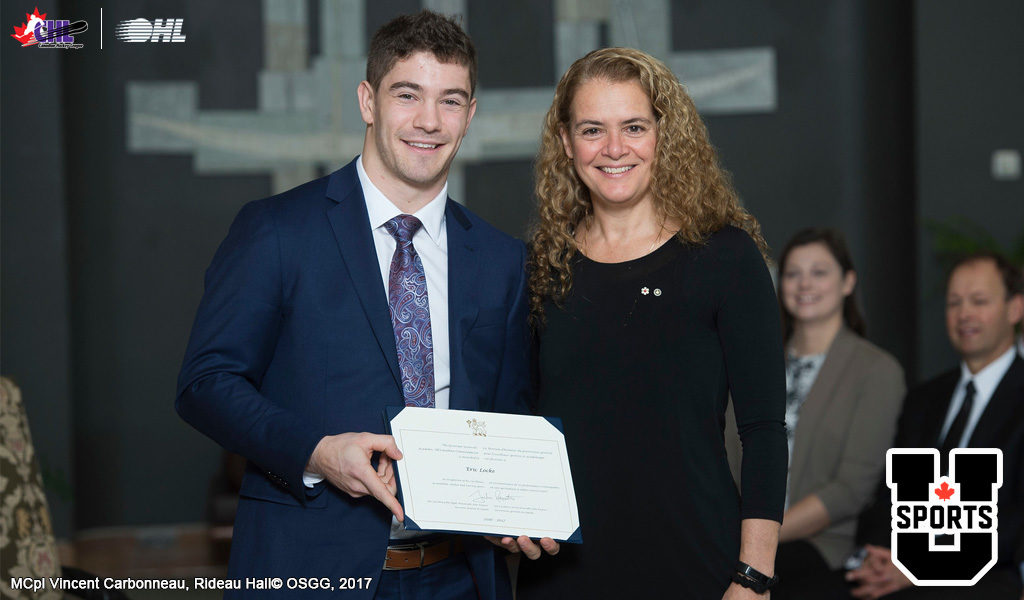 OHL graduate Eric Locke, a former member of the Windsor Spitfires, Barrie Colts and Saginaw Spirit from 2010-14 was one of eight U SPORTS Top Academic All-Canadians from the 2016-17 season to be honoured in Quebec City on Friday morning.

A former captain of the Saginaw Spirit, Locke was a seventh round pick of the Buffalo Sabres in the 2013 NHL Draft and amassed 251 points (116-135–233) over his four OHL seasons.

Her Excellency the Right Honourable Julie Payette, the newly-apppointed Governor General of Canada, presented the fifth annual Governor General’s Academic All-Canadian Commendation to Locke and the seven other recipients, during a ceremony at the Citadelle of Québec, her official residence in Quebec City.

These students have mastered the balance between sport and education. For this, they received the Academic All-Canadian Commendation. @USPORTSca pic.twitter.com/HX1GGjH3zI

Every year, a growing number of U SPORTS student-athletes are recognized as Academic All-Canadians, having maintained an average of 80 per cent or better over the academic year while competing for one – or more – of their university’s varsity teams. Among these outstanding individuals, one female and one male student-athlete from each of the four conferences are selected annually to make up the Top 8.

“The list of Academic All-Canadians continues to grow each year,” said Graham Brown, President and CEO of U SPORTS. “The success of the Top 8 is a testament to the dedication of our student-athletes on the field of play, in the classroom and as leaders in their communities across the country.”

Over his three years at StFX, Eric Locke has reached the highest level of achievement in the four key pillars of student-athlete success: athletics, academics, citizenship and leadership. As a captain with the X-Men hockey team, he has excelled both on and off the ice.

Locke, a Toronto native, led the X-Men to back-to-back AUS conference championship banners, the first men’s hockey titles for StFX since 2004. The 2016 StFX male athlete of the year, he also appeared in three consecutive U SPORTS national championships and was a silver medalist with the team in 2016. Locke was honored as the 2016 Atlantic University Sport most valuable player, in addition to receiving AUS first team all-star status and being named a 2016 U SPORTS First Team All-Canadian. He was the X-Men top scorer and most valuable player in each of the past two seasons and received AUS second team all-star status in 2017.

Truly the greatest undergrad experience. The last 3 years have been an incredible ride,… https://t.co/tUCrct241R

In terms of academic success, Locke is a three-time U SPORTS Academic All-Canadian and Dean’s List student who ranked tops in his class in the Bachelor of Science, human kinetics program. He received the university’s Larkin Trophy awarded to the top senior male student for excellence in academics and extra-curriculars and was the recipient of the 2016-17 StFX Athletic Director’s Award for Academic Achievement with the highest grades of any male student-athlete on campus. Locke was also honored by the AUS as the 2017 James Bayer award-winner, recognizing excellence in academics, athletics, leadership, sportsmanship and citizenship.

Building upon excellence in citizenship and leadership, Locke received the 2016-17 StFX Athletics Male Community X-Cellence award and the 2017 AUS men’s hockey Godfrey Award, recognizing community service. The outstanding work Eric has done in the community includes involvement with the Antigonish, N.S., minor hockey mentorship program, StFX Fit 4 Tots program, volunteering with the Antigonish Multisport Program and the Paq’Tnkek First Nation Learn to Play initiative. He was an X-Men representative on the StFX Student-Athlete Advisory Council for the past two years and was a member of the StFX Pre-Med Society. A member of the StFX Leadership Academy for three years, Eric was honoured as a ‘Leader of Distinction’, the highest honour bestowed by the Leadership Academy. Since graduating from StFX last May, Eric was accepted into medical school at the University of Ottawa and is now a member of the Gee-Gee’s hockey program.

“We have four pillars at @StFXAthletics, and this guy excels in every single one” – @leomacpherson on @stfxuniversity graduate Eric Locke pic.twitter.com/Ho8PqwE8by

“Eric Locke is an outstanding example of what a student-athlete should stand for. He is an elite hockey player, a dynamic player on the ice and was a tremendous leader as our team captain,” said X-Men head coach Brad Peddle. “Off the ice, he is a three-time Academic All-Canadian, finishing at the top of his class last year with a 94 average. His ability to balance both athletics and academics is among the best I have seen, and he continues to drive himself to be better in every way.”