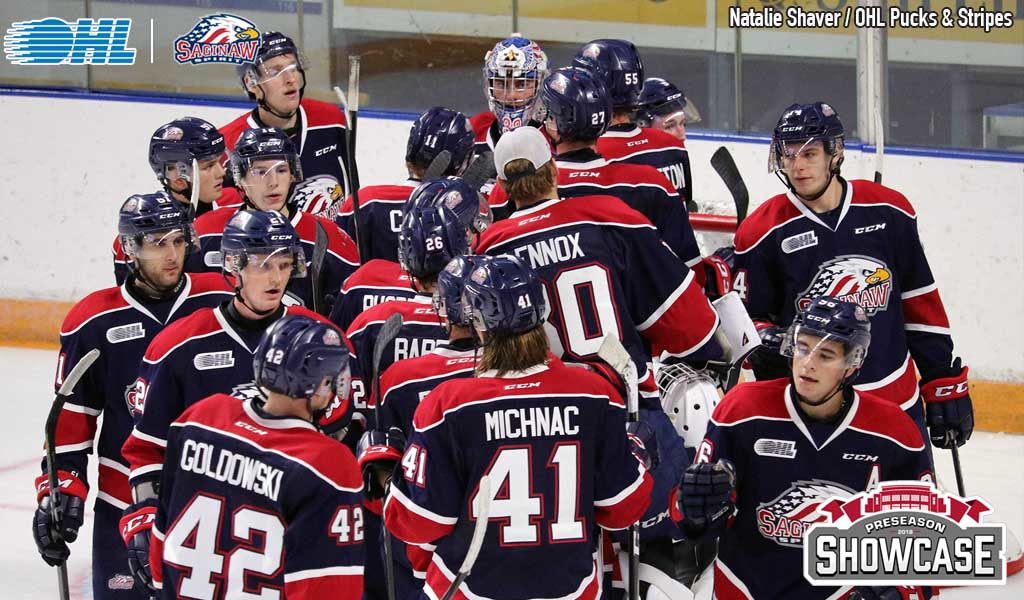 It may only be pre-season but three wins in three days is a feather in your cap.

The Saginaw Spirit did exactly that wrapping up a perfect 3-0 weekend at the Kitchener Memorial Auditorium to help open the league’s exhibition schedule.

“I think it was good having a full group coming back, not like last year where we were all new faces,” said Spirit head coach Troy Smith who returns for his second season behind the bench in Saginaw. “You could see that the players put in a lot of good work over the summer and are prepared for this season.”

Wins came Friday by a 3-0 score against the North Bay Battalion, then Saturday edging the host Rangers 5-4, and Sunday with a 3-1 triumph over the QMJHL’s Moncton Wildcats.

This is the first Pre-Season Showcase of its kind to be hosted by the Rangers that featured four teams with six games over three days similar to the event introduced a year ago and repeated over Labour Day weekend at Buffalo’s Harborcenter.

“It’s great to get on the road and it’s great to see different competition with Moncton being here,” Smith added. “I think it’s a fantastic opportunity before these kids go off to NHL camps to bond together. And as coaches, it’s nice to have your group on the ice and play games against other competition and not just yourselves and see where you’re at and see where you need to go.”

The Spirit lineup featured four players getting their first taste of OHL action including the highly anticipated debut of New York Islanders prospect Bode Wilde who scored once in two games.

“I thought Bode did great,” Smith said of the 2016 second round OHL pick turned 2018 second round NHL pick. “It’s always tough to come into a new environment but he did a fantastic job. I thought he moved the puck well, I thought he had great poise on the blue line, and was really strong defensively. We’re really excited to have a player of Bode’s caliber. Hopefully we can turn him into the pro that he wants to be and hopefully he can help us to win.”

The weekend also launched the OHL careers for three members of the 2018 Priority Selection class including defenceman Ethan Cardwell who picked up two assists, fellow second rounder Tristan Lennox who stopped 22 of 26 shots in Saturday’s victory, and fifth overall pick Cole Perfetti who had one assist in three games.

“I’ve been looking forward to this ever since I signed,” Perfetti said post-game Sunday. “It’s a dream come true to finally put on this jersey. An amazing feeling to play with all those guys and finally playing in the league it was awesome.”

A feeling shared by rookies around the league this weekend, there can be moments of nervousness when the OHL dream becomes a reality.

“When I walked out for the first game against North Bay for warmup and saw there were a couple hundred people in the stands, just for watching warmup, it really hit me,” the former Vaughan Kings top scorer said. “You’ve got to perform your best and I thought it made a big difference in my game.”

Smith wasn’t at all surprised with how Perfetti was able to fit right in with his new teammates.

“I think the advantage that Cole has is that he was a billet family with the Oshawa Generals for a number of years so he’s been around it. He really didn’t look nervous at all. He spoke extremely well to the coaches, a very mature kid, and I thought that showed on the ice. He’s got tremendous poise, he can make great plays under pressure, and I think his game’s got a long way to go even though he has played so well so far.”

Also playing well in the early stages of the season was veteran Brady Gilmour who led the Spirit with two goals and one assist in two games.

“Brady was great,” Smith said of his fourth year forward. “Tough injury to end last year that really hurt our team not having him in the lineup. He was a real big leader for us this weekend, scored some big goals, and really led by example.”

Leading some of the younger players by example is a role Gilmour can embrace given his experience in the league as the club’s first round pick back in 2015.

“Getting to camp I just think of my first year and Dylan Sadowy was a fourth year guy and it just makes me feel kind of old,” he laughs. “I just look back to when I was a rookie and just try to treat them well and welcome them because that’s what guys did for me.”

Much of the Spirit’s success will come from veterans like Gilmour who is excited at what 2018-19 has in store for Saginaw.

“It’s just pre-season but to get a couple wins and play with the guys again is definitely a good start to what’s hopefully going to be a good year,” the Detroit Red Wings prospect adds. “We had a couple exciting signings, guys are a little older, expectations are definitely higher but it’s a good league and anything can happen.

We just need to keep working hard in practice and hopefully bring this success to the regular season.”