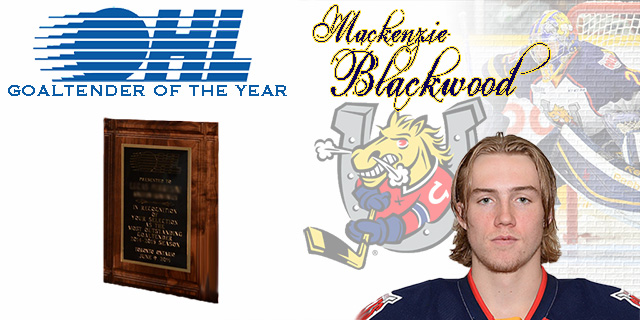 Toronto, ON – The Ontario Hockey League today announced that New Jersey Devils prospect Mackenzie Blackwood of the Barrie Colts is the 2015-16 recipient of the OHL’s Goaltender of the Year award.

Blackwood played in 43 games this season posting a record of 28-13-0-0 with three shutout victories along with a goals-against-average of 2.72.  He also tied for the league-lead with a .921 save percentage while backstopping the Colts to their second straight Central Division title.

“It is an honour to receive this award considering the amount of great goalies throughout the league,” said Blackwood. “I would like to thank my teammates who battled in front of me all year, my coaches for helping me develop into the player I am today, and the whole Barrie Colts organization for the great opportunities that they have allowed me to experience over the past three seasons.”

The 19-year-old from Thunder Bay, ON, was chosen by the Colts in the fifth round of the 2012 OHL Priority Selection.  He played three full seasons in Barrie and accumulated 84 career wins which ranks second in franchise history behind Brian Finley’s 88 recorded between 1997-2001.  Blackwood becomes the third Colts goaltender to win the award following Finley in 1999, and Paulo Colaiacovo in 2004.

“This is a substantial accolade for Mackenzie; something that he worked hard to achieve over the past three seasons with the Colts,” said General Manager Jason Ford. “He was a virtual unknown; off the radar when we drafted him in 2012, and he has worked on his game on and off the ice diligently to make himself a world class junior goaltender.  As an organization we are extremely happy for him and it’s nice to see him honoured this way.”

During the 2015-16 campaign Blackwood made at least 30 saves in 28 of his games including a season-high 49-save performance on March 4 in a 6-3 road win over the Niagara IceDogs.  The 6’4’’ netminder earned Vaughn OHL Goaltender of the Month honours during November, and was recognized in the annual Eastern Conference Coaches Poll as the second Best Shootout Goalie, while tying for first in the Best Puck-Handling Goalie vote.  This season Blackwood also competed for Team OHL in the CHL Canada Russia Series earning a 25-save shutout before representing Canada at the 2016 IIHF World Junior Championship.  Selected by the Devils in the second round of the 2015 NHL Draft, Blackwood signed his entry-level contract with the club in December.

Blackwood received 49 points in the voting process ahead of runner-up Devin Williams of the Erie Otters who finished with 47 voting points, followed by Carolina Hurricanes prospect Alex Nedeljkovic of the Niagara IceDogs who received 46 voting points.