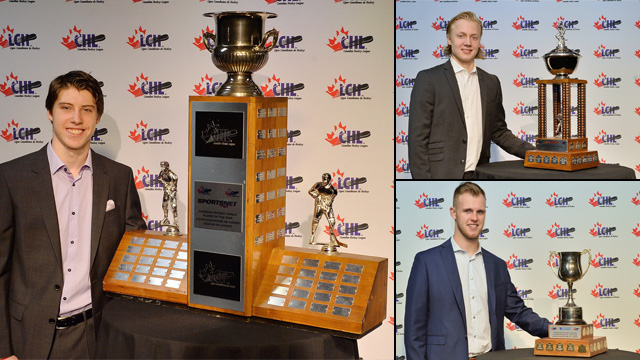 Among the award recipients were a trio of OHL players including Toronto Maple Leafs prospect Mitch Marner of the London Knights named Player of the Year, 2016 NHL Draft prospect Alex Nylander of the Mississauga Steelheads named Rookie of the Year, and defenceman Will Petschenig of the Saginaw Spirit named Humanitarian of the Year.

The awards were presented as part of the 2016 MasterCard Memorial Cup festivities in Red Deer.

BRP Top Prospect Award: Pierre-Luc Dubois (Cape Breton Screaming Eagles):
Cape Breton forward Pierre-Luc Dubois became the first Quebec Major Junior Hockey League player in more than a decade to be named No. 1 on NHL Central Scouting’s final ranking of North American skaters eligible for the 2016 NHL Draft. In his third season in the QMJHL, the 17-year-old from St-Agathe-des-Monts scored 42 goals added 57 assists for 99 points in 62 games. He also maintained a +40 rating.  Finalists for the award include Matthew Tkachuk of the London Knights ranked second, and Jake Bean of the Calgary Hitmen ranked at number 15.

Cavendish Top Scorer Award: Conor Garland (Moncton Wildcats):
Arizona Coyotes prospect Conor Garland tallied 39 goals and 89 assists for 128 points in 62 games while maintaining a +26 rating for the Wildcats.  The 20-year-old from Scituate, MA, shared the award with Dylan Strome of the Erie Otters last season and becomes the first back-to-back recipient since Sidney Crosby of the Rimouski Oceanic in 2004 and 2005.  Finalists for the award include San Jose Sharks prospect Kevin Labanc of the Barrie Colts and Adam Brooks of the Regina Pats.

Janes Sportsman of the Year Award: Samuel Girard (Shawinigan Cataractes):
2016 NHL Draft prospect Samuel Girard scored 10 goals and added 64 assists for 74 points in 67 games.  The 18-year-old from Roberval, QC, led all QMJHL defencemen in scoring while spending just 10 minutes in the penalty box.  He is listed 38th among North American skaters by NHL Central Scouting for the 2016 NHL Draft.  Past Cataractes to win the award include Cedric Lalonde-McNicoll who won back-to-back in 2008 and 2009, and Benoit Mondou in 2004.  Finalists for the award include Los Angeles Kings prospect Mike Amadio of the North Bay Battalion, and Tyler Soy of the Victoria Royals.

All Weather Windows Humanitarian of the Year Award: Will Petschenig (Saginaw Spirit):
Will Petschenig made an immediate and lasting impact in the Saginaw community as a member of the Spirit during the 2015-16 campaign creating the program “A Heart Like Mine” with the hope of reaching out to children and families who are grieving the loss of a loved one.  The 21-year-old from Manotick, ON, developed friendships and memories with over 50 kids, ‘Will’s Warriors’, sharing an unfortunate common bond through his program and in his countless hours volunteering at the Great Lakes Bay Region Grief Center.  Finalists for the award include Tyler Wong of the Lethbridge Hurricanes, and Samuel Laberge of the Rimouski Oceanic.

TVA Sports Scholastic Player of the Year Award: Alexis D’Aoust (Shawinigan Cataractes):
Alexis D’Aoust is a devoted young man on the ice and in his studies. He is currently studying in natural sciences at Shawinigan’s college.  The 20-year-old from Trois-Rivieres, QC, scored 44 goals and 54 assists for 98 points in 68 games this season.  He is the second member of the Cataractes to win the award following Pierre-Marc Guilbault in 2006.  Finalists for the award include Tanner Kaspick of the Brandon Wheat Kings and 2017 NHL Draft prospect Nicolas Hague of the Mississauga Steelheads.

Bumper to Bumper Brian Kilrea Coach of the Year Award: Gilles Bouchard (Rouyn-Noranda Huskies):
Gilles Bouchard led the Huskies to the top of the QMJHL standings with 113 points powered by an overall record of 54-9-3-2.  In just his third season behind the Rouyn-Noranda bench, the club captured their first President Cup in franchise history.  Bouchard played in the QMJHL with Shawinigan, Trois-Rivieres, Beauport, and Chicoutimi from 1988-91.  Finalists for the award include Dave Lowry of the Victoria Royals and Kris Knoblauch of the Erie Otters.

CCM Rookie of the Year Award: Alexander Nylander (Mississauga Steelheads):
Alexander Nylander scored 28 goals and 47 assists for 75 points in 57 games played setting a Mississauga Steelheads rookie scoring record.  The 18-year-old from Sweden is currently ranked third among North American skaters for the 2016 NHL Draft and represented his country at the 2016 IIHF World Under-18 Championship and IIHF World Junior Championship this season.  Finalists for the award include Matthew Phillips of the Victoria Royals and Vitalii Abramov of the Gatineau Olympiques.

Vaughn Goaltender of the Year Award: Carter Hart (Everett Silvertips):
Carter Hart enjoyed a terrific season helping lead the WHL’s second-best defensive club, posting a 35-23-1-3 record with six shutouts in 63 appearances.  The 17-year-old from Sherwood Park, AB finished second amongst WHL netminders with a 2.14 goals against average, finished with the sixth-best save percentage at .918 and placed first overall with 35 victories for the Silvertips.  Hart is ranked second amongst North American goaltenders by NHL Central Scouting for the 2016 NHL Draft.  Finalists for the award include New Jersey Devils prospect Mackenzie Blackwood of the Barrie Colts, and Chase Marchand of the Rouyn-Noranda Huskies.

Arctic Spas Defenceman of the Year Award: Ivan Provorov (Brandon Wheat Kings):
In his second season in the WHL, Wheat Kings defenceman Ivan Provorov played a major role for Brandon at both ends of the ice. The 19-year-old from Yaroslavl, Russia finished first in scoring amongst WHL defencemen with 73 points, which included 21 goals in 62 games, while also leading the League with a plus-64 rating. A member of Russia’s National Junior Team that won silver at the 2016 IIHF World Junior Championship, Provorov was selected seventh overall by the Philadelphia Flyers in the 2015 NHL Draft.  Finalists for the award include 2016 NHL Draft prospects Mikhail Sergachev of the Windsor Spitfires and Samuel Girard of the Shawinigan Cataractes.

Sportsnet Player of the Year Award: Mitch Marner (London Knights):
Mitch Marner scored 39 goals and 77 assists for 116 points in just 57 games eclipsing the century mark for the second straight season.  He also maintained a +45 rating helping the Knights finish second in the OHL’s regular season standings.  The Knights co-captain produced 31 multi-point performances, a 21-game point-streak, and represented Canada at the 2016 IIHF World Junior Championship.  The 19-year-old from Thornhill, ON, was selected fourth overall by the Toronto Maple Leafs in the 2015 NHL Draft.  He becomes the third Knight to win the award following Jason Allison in 1994, and Dave Simpson in 1982.  Finalists for the award include Ottawa Senators prospect Francis Perron of the Rouyn-Noranda Huskies, and Florida Panthers prospect Dryden Hunt of the Moose Jaw Warriors. 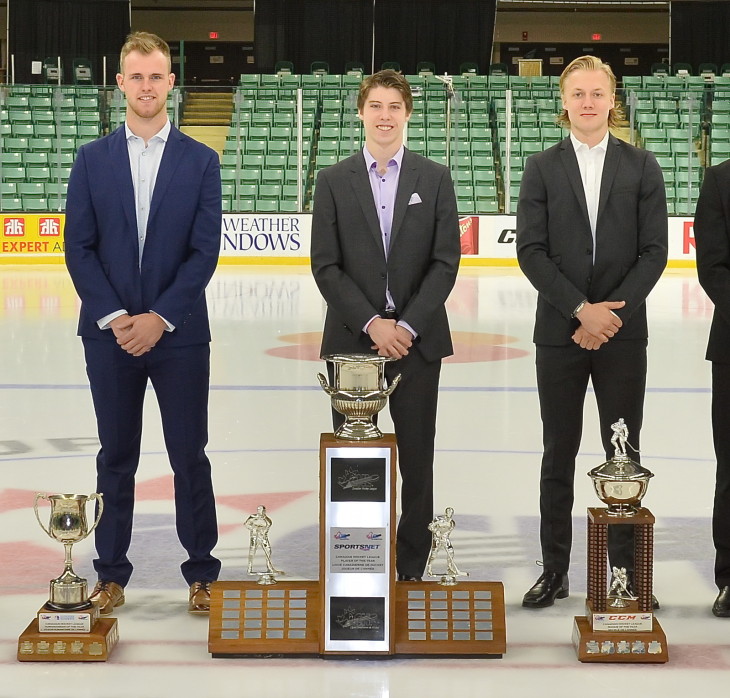