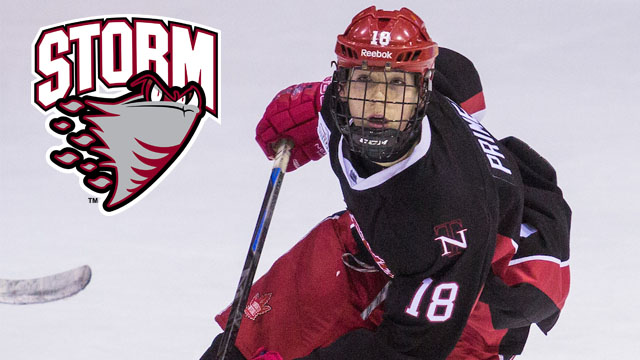 Guelph, Ont. – General Manager and Head Coach George Burnett announced Wednesday that Mason Primeau and his family have committed to the Storm.

Primeau, a six-foot-five, 185-pound forward from Etobicoke, was the Storm’s second-round pick (22nd overall) in the 2017 OHL Priority Selection.

“We are excited to have Mason join our program and to have the opportunity to work closely with him to fulfill his outstanding potential,” said Burnett.  “Mason brings excellent size and is a very intelligent player. He is a strong skater who plays an effective two-way game. Mason will be an important member of our team moving forward.”

“I’m extremely excited to continue my development as part of the Storm franchise,” said Primeau.  “I’ve heard such great things about the fan base and know how rich the history is in Guelph.  To be a part of that is something special and I can’t wait to begin in August.”

After recovering from a late-season injury, Primeau recently represented the GTHL at the 2017 OHL Gold Cup in Kitchener. He tallied two points (one goal, one assist) in five games at the tournament, including a goal in the championship game as his ‘GTHL Red’ team emerged victorious.

Having already attended the Storm’s annual Prospects Orientation Day last month, Primeau is scheduled to arrive at training camp in late August in advance of the 2017-18 season.