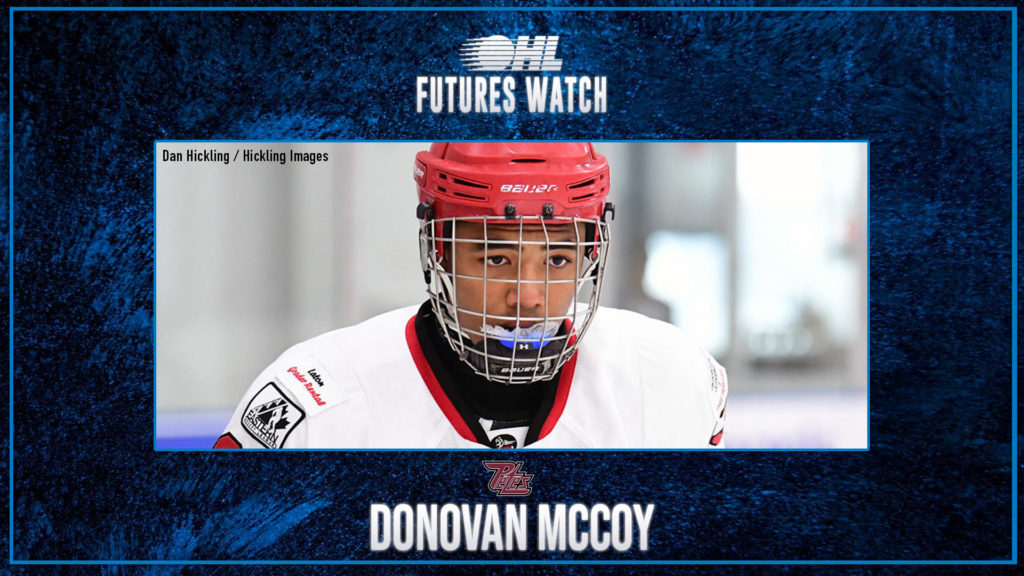 When Donovan McCoy was drafted 15th overall by the Peterborough Petes last April, among the first players to reach out to him was Petes product and Toronto Maple Leaf Nick Robertson.

“[He] gave me a call and congratulated me and we talked for 10-15 minutes. It was a really cool experience to know he took time out of his day to call me,” McCoy recalled.

A self-described 200-foot defenceman who uses his vision and size to his advantage in all situations, McCoy’s love for the game was fuelled by the time he spent in rinks around his hometown of Belleville growing up. The son of a Zamboni driver, McCoy was a regular at Yardmen Arena back in the day.

“Always being around rinks, there was always interest in the game, and with the Belleville Bulls that used to be here, it was always interesting and cool knowing that one day I could be right there,” said the 16-year-old defenceman.

“I was a Subban fan. I wasn’t old enough to see P.K. but I watched Jordan and Malcolm come through in Belleville and Jordan was one of my favourite players on the Bulls to ever watch so it was always cool to see them play, get welcomed to the community and eventually get drafted to the NHL. They were my inspiration growing up.”

“Donovan is a very mature young man,” said Oke. “He’s a smooth skater with good size, he can be physical and he is somebody who can advance the puck out of his own end. We feel he has the skills and ability to have a very successful time in the OHL and work toward a potential professional career.”

When the Petes expressed interest ahead of the 2020 OHL Priority Selection last spring, it didn’t take long for McCoy to determine nearby Peterborough would be a good fit.

“After I talked with my family and agent, we really figured it out and came to the conclusion Peterborough was going to be a really good fit for me,” he said. “Just knowing the players that go through there are mature, that the community loves them, and that they’re always welcome no matter what. Knowing I’m going to a good hockey town and am going to be being able to go to a good school down there. It’s a welcoming environment and I love all the coaching staff.”

Focused on a return to the ice in 2021-22 following a difficult year ravaged by ongoing COVID-19 cases and strict provincial health regulations, one of McCoy’s biggest takeaways in preparing for his rookie debut has been remaining positive.

Despite the circumstances, that positive mindset has continued to shine through and has gone a long way with Oke.

“We’ve had our weekly Zoom calls for more than the last year now and he participates regularly and is just somebody who is positive despite the challenging times.” continued Oke. “He always seems to put a positive spin.”

Sam Alfano (Southern Tier) and Donovan McCoy (@QuinteRedDevil) have been named the #OMHA‘s Minor Midget AAA Players of the Year by @OHLHockey! pic.twitter.com/LZ91yfLqmA

When McCoy does get the opportunity to get settled in Peterborough – a convenient hour and a half away from home – and showcase his reliable game in the maroon and white for the first time next season, it’s then, he says, his dream of cracking the OHL will start to completely settle in.

“Getting to say I’m part of the team and say I’m going to be able to achieve that goal of mine of playing in the OHL is always exciting and sometimes overwhelming to think about in my head,” he said. “The Petes are loved in Peterborough, so for little kids who admire what I do, I can’t wait to be a role model for them and prove to them that I’m the right choice.”

And while doing so, he’ll be thinking of the words passed on to him from Robertson on that special morning last April.

“He told me to keep my head up, not take anything for granted, keep trying my best and give everything my all. If it’s a practice or an off day, make sure I’m not slacking off or doing anything I wouldn’t normally do,” he recalled. “Eyes are going to be on me 24/7.”