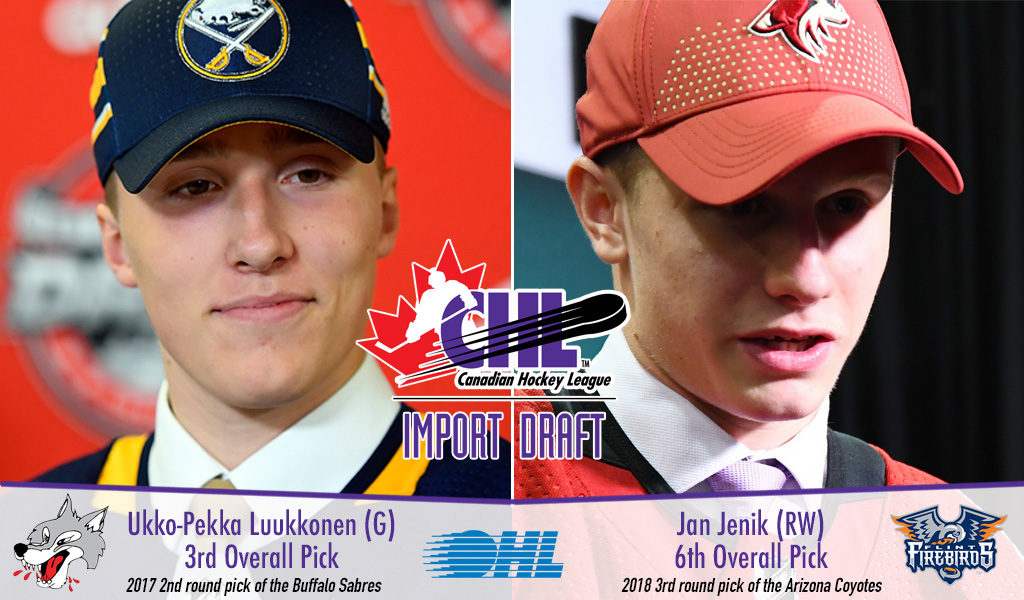 A total of 27 players were chosen by 18 Ontario Hockey League clubs in the 2018 CHL Import Draft process including 16 forwards, seven defencemen, four goaltenders, and a total of nine different countries represented.

Here’s a rundown of the selections:

The first goaltender chosen in the CHL Import Draft since 2013, Buffalo Sabres prospect Ukko-Pekka Luukkonen joins the Sudbury Wolves who were the first OHL club to select in Thursday’s draft.  The 6’4, 196lb, 19-year-old Finnish netminder, recently signed an entry-level contract with the Sabres who selected him in the second round a year ago.  Luukkonen represented his country in Buffalo at the 2018 IIHF World Junior Championship.

“Ukko-Pekka is a world class goalie who has been a world champion and was the highest drafted European goalie in the 2017 NHL Draft,” said Sudbury Wolves General Manager & VP Hockey Operations Rob Papineau. “He is a very athletic goalie who the Buffalo Sabres are very high on as a player and as a person and we felt he was easily the best goalie available in this draft.  In a year where Import goalies were eligible again, he is the best and he deserves to be the first goalie selected in the CHL Import draft.  We are very happy to select him.”

The last time the Wolves selected third overall in this process was 2015 when they picked Russian forward Dmitry Sokolov who had one of the most successful OHL careers in Import Draft history.  He played three OHL seasons and scored 128 goals in 196 games which is more than any other player chosen in the draft.

Jan Jeník, a native of Nymburk, Czech Republic, was recently selected by the Arizona Coyotes in the third round (65th overall) of the 2018 NHL Draft. He recorded an impressive 15 points (7G, 8A) in 19 international games with Czech Republic’s National Men’s U-18 Team during the 2017-18 season. At the 2017 U-18 World Championship in Russia, Jeník tallied six assists, including a plus-one rating and 13 shots on goal in seven games.

“We are happy to select Jan with the sixth overall pick in the 2018 CHL Import Draft,” said Flint Firebirds Vice President of Hockey Operations and General Manager Barclay Branch. “Jan is a strong, power-forward that plays with a physical element to his game and has proven that he can contribute on the international level.”

Liam Kirk made history last weekend as the first British born and trained player to be selected in the NHL Draft chosen in the seventh round by the Arizona Coyotes.  The 6’1”, 160lbs 2000-born left winger played for the Sheffield Steelers in the EIHL in 2017-18. In 52 games, Kirk recorded 9 goals, 7 assists, and 16 points – the third-highest point total ever in the EIHL by an under-19 player.

“Liam is somebody that we were able to follow last season that impressed us with his skating and puck skills,” commented Petes General Manager Mike Oke. “In conversations leading up to the draft, he expressed his excitement at the chance to play in Peterborough and the Ontario Hockey League.”

Cajka, a 6’0”, 163-pound forward, appeared in 38 games for Zug of the Switzerland Elite Jr. A league during the 2017-18 season, tallying eight goals and 21 points, while adding another goal and two points in eight playoff games. The Kadan, Czech Republic, born forward suited up for his home country at the 2018 U18 World Junior Championship in Russia this past spring where he scored a goal and recorded three points in seven games.

“We are thrilled to be adding a player like Petr,” said Erie Otters General Manager Dave Brown. “He’s a slick, smooth skating center who is responsible and has a very good hockey IQ. As a late 2000, Petr enters this season as a player who has garnished a great deal of interest leading into the 2019 draft based on his efforts and hard work, and we’re excited to be able to assist him through the process.”

Prosvetov, 19, hails from Moscow, Russia, and played the 2017-18 season with the Youngstown Phantoms in the United States Hockey League. He appeared in 36 regular season games, recording 19 wins with a 2.90 goals-against-average and a .913 save percentage before being selected in the fourth round of the 2018 NHL Draft by the Arizona Coyotes.

“We are pleased to select Ivan Prosvetov in the CHL Import Draft and welcome him to the Spirit family,” said Spirit General Manager Dave Drinkill. “He is a very big, athletic, and competitive goalie. His skills were put on display this season when he led Youngstown to the Clark Cup Final. We are excited about his upside and potential and look forward to getting him started with us in training camp.”

A top prospect eligible for the 2020 NHL Draft, Rossi put up 51 points in 34 games for the GCK Lions U-20 club as a 16-year-old last year.  The Austrian forward also played 18 games against men for the GC Küsnacht Lions, in which he had four goals and three assists.

“Marco is a world class player and a top flight prospect for the 2020 NHL Draft,” said Boyd. “He has been a consistent point producer and gained experience playing against professionals in the Swiss League NLB. We are confident that Marco will choose Ottawa to continue his hockey development.”

Reisnecker, a native of the Czech Republic, spent the 2017-18 season with the EV Regensburg U19 team in the DNL where he recorded 59 points (25 goals, 34 assists) in 28 games. Steelheads’ assistant general manager and assistant coach, Jeff Kyrzakos is pleased with the addition of Reisnecker, commenting that the 6’1”, 170-pound forward is “a good gifted player that will be in Mississauga for a couple years and we are looking forward to having him in our lineup.”

Postnov scored 17 goals and earned 12 assists for 29 points while accumulating 34 penalty minutes in 63 games with Stupino Capitan of the MHL, or Youth Hockey League, last season. The Moscow, Russia, resident, who turned 18 on April 19, stands six feet and weighs 156 pounds.

“He’s a guy no different from a few of our players this year who were just off the (National Hockey League) Draft,” said Adam Dennis, one of two assistant general managers and an assistant coach with the Battalion. “He’s a winger who’s very skilled, likes to shoot the puck, and he goes to the net really hard. He enjoys scoring goals, and I think he’s going to be fun to watch next year.”

“Kari is the best 2001-born goalie in Finland,” Rychel said. “He has excellent size and is extremely athletic. He gives us depth behind Mikey (DiPietro) and will be a Spitfire for years to come.”

The 6’2, 185 forward played last season for HC Davos in Switzerland and despite going undrafted in Dallas has been invited to attend Vancouver Canucks prospect camp next week.  The soon-to-be 19-year-old is a two-time member of the Swiss National Junior Team.

Sopa, a 17-year-old left winger, spent the past season with Bern U20 in the SC Junior A league. The 5’9, 190lb Swiss-born player represented his country at IIHF U18 Hockey Championship in April, finishing as a point per game player with 6 in 6 games. With Bern U20, he scored 21 goals and collected 35 assists in 41 games.

For the first time in franchise history, the Frontenacs will have a dash of Swiss in their lineup.  Derungs is a five-foot-seven, 154-pound, 18-year-old from Frauenfeld, Switzerland, who scored 52 points in 38 games last season for Kloten EHC Sports AG Jr.

“His experience and his character are going to be huge for us this coming season,” said Frontenacs General Manager Darren Keily. “He’s a pretty good player. He’s not the biggest guy in the world, but he competes like crazy, can skate and do all the little things we are going to be looking for.”

The 2001 born forward, will be heading into his first NHL Draft eligible season.  Playing for CSKA Moskva in the Russian U17 League last season, the highly-skilled centre scored 14 goals for 32 points in 25 games played.

A native of Koln, Germany, Alberg played last season with the Kolner EC Jr team where he found the back of the net 24 times and added 26 assists in just 39 games.  He also added 1 assist in three playoff games.  Alberg has also competed internationally for Germany in 2017-18, playing for the U18 team at the IIHF World Division 1A championships.

“Manuel has a great skill set and is a good skater” said Attack General Manager Dale DeGray.  “He is a guy that is going to be considered by NHL teams for the 2019 NHL Entry draft.”

Last year suiting up for the Green Bay Gamblers of the USHL, Zhukov played in 53 games posting a 27-19-1 record with a 2.45 GAA.  He was selected in the 4th round of the 2017 NHL Draft by the expansion Vegas Golden Knights.

“Zhukov is a talented goalie that we are familiar with from the Under-18 tournament in Slovakia in 2017, and then his play in Green Bay,” said Colts General Manager Jason Ford. “He has a lot of ability in his game and gained plenty of mileage last season playing in North America.”

The Södertälje, Sweden native was a member of Djurgardens IF Jr. last season where he registered three goals and 22 points in 25 games during Euro One play, followed by another three goals and nine points in 17 games during Euro Two.  The second round pick by the Boston Bruins in the 2018 NHL Draft participated in the 2018 U-18 World Championship in Russia in April, registering a pair of assists in seven tournament games to help lead Sweden to a bronze medal finish.

“Erik was injured in the first part of the season with Red Bull Salzburg, but came back and had a solid finish to the year,” said Petes General Manager Mike Oke. “He’s a very talented player that many consider to be one of the top Czech players in his age group. He also wants to come to North America to hone his skills.”

A member of Team Belarus U20, Zuyev attended a camp in the GTA a couple of weeks ago and demonstrated to the Steelheads’ coaching staff to be a strong d-man who exemplifies a good first pass and who skates and moves well. After spending the 2017-18 season in the Belarus men’s league, Zuyev is a promising young defenceman who the Steelheads expect to grow and develop into a solid blueliner.

Maier, a right-shot rearguard, played last season at various levels with the Sodertalje SK under-18 team in Sweden, totaling six goals, 24 assists, 30 points and 45 penalty minutes in 40 games. Having turned 18 on Jan. 12, he stands five-foot-11 and weighs 156 pounds.

Bukac, a 19-year-old defenseman, played in the WHL for the Brandon Wheat Kings from 2016-2018. The 6’5, 207lb Czech-born player, known for being a big-bodied shutdown defenceman, represented his country at the 2017 IIHF U18 Hockey Championship, and the 2016 Ivan Hlinka Memorial tournament. Bukac was drafted by the Boston Bruins in the 2017 NHL Draft, in the 7th round.

A native of Zell (Mosel), Germany, Seider stands at 6-foot-4-inches and 183-pounds.  He played last season with Jungalder Manheim U19 where he had 10 goals and 17 assists in 26 games.  Seider also competed internationally recording 1 goal and 3 assists in 5 games at the IIHF Divison 1-A U-18 World Championships, where he was teammates with the Attack’s 45th overall pick Manuel Alberg.

“Moritz is an absolute stud of a defencemen who is slated to go in the first round of the 2019 NHL Entry Draft” said Attack General Manager Dale DeGray.  “He’s a special player that we feel we can have a real positive impact with his development towards taking the next step in his hockey career.”

Pekar played in 56 games with the USHL’s Muskegon Lumberjacks, recording 14 goals and 40 assists during the season.  He was selected in last year’s NHL Draft by the Buffalo Sabres in the 4th round.

“Pekar really came on last year with Muskegon, and plays a high-energy game that will create offence,” said Colts General Manager Jason Ford. “He is a mature kid that wants to be a player and will do whatever he can to achieve his goals.”

CLICK HERE FOR FULL RESULTS OF THE 2018 CHL IMPORT DRAFT