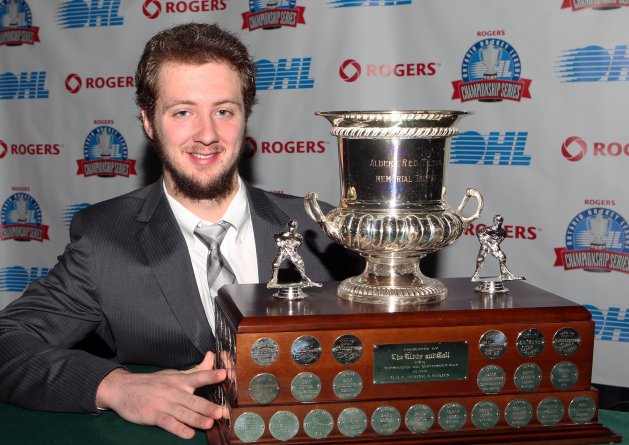 London, ON – The Ontario Hockey League today announced that goaltender Michael Houser of the London Knights is the 2011-12 recipient of the Red Tilson Trophy awarded to the OHL’s Most Outstanding Player of the Year as voted by the writers and broadcasters that cover the league.

Houser played an incredible 62 games between the pipes for the first place Knights backstopping the club to their fifth Hamilton Spectator Trophy as the OHL’s top regular season team.  Also named the OHL’s Goaltender of the Year, Houser posted a record of 46-15-0-1 tying the OHL single season record for most wins by a goaltender set by Andrew Engelage of the OHL Champion Windsor Spitfires in 2009.

“It’s a huge honour,” said Houser.  “There are a lot of great players in the league, especially this year, and it is nice to be recognized.  It’s an award that I couldn’t have won without the teammates in front of me.  They play hard every night and they make my job a lot easier.  A lot of thanks go out to them.”

Houser is just the fifth goaltender to receive the prestigious Red Tilson Trophy following Andrew Raycroft (Kingston 2000), Bill Harrington (Kitchener 1952), Glenn Hall (Windsor 1951), and Gil Mayer (Barrie 1949).  He is also the fifth member of the Knights to win the award following Corey Perry in 2005, Jason Allison in 1994, Dave Simpson in 1982, and Dennis Maruk in 1975.  The 19-year-old native of Wexford, PA, is also just the third American-born player to win the award following David Legwand (Plymouth 1998), and Pat Peake (Detroit 1993).

“We’re honoured to have had Michael on our team once again this season,” said Knights General Manager and Head Coach Mark Hunter.  “He’s a leader both on and off the ice and is definitely one of our hardest workers setting an example for the rest of the team.  Houser is one of the biggest reasons we finished first overall and have made it all the way to the Rogers OHL Championship Series and we’re pleased to see him receive the Red Tilson Trophy as the OHL’s Most Outstanding Player of the Year.”

Undrafted into the OHL, Houser joined the Knights prior to the 2009-10 season and has already played in 141 regular season contests.  His 62 games played led all OHL goaltenders this season while his 1862 saves was also the league’s top mark.  He finished second with six shutout victories while his goals-against-average of 2.47 was third-best in the league, and his save percentage of .925 ranked fourth overall.  In this year’s Western Conference Coaches Poll, he appeared in three categories and was considered the Best Shootout Goalie, the second Hardest Worker, and the third Best Puckhandling goalie.  This season Houser stopped at least 30 shots in 36 different games including six games with 40 or more saves.

The Red Tilson Trophy is the most prestigious individual award presented by the Ontario Hockey League.  Accredited media were asked to select their top three choices from the 20 nominees representing all 20 member clubs.  Players received five points for a first place selection, three points for second place and one point for a third place selection.

Houser will be the OHL’s nominee for the Canadian Hockey League Player of the Year Award presented at the CHL Awards Ceremony during the 2012 MasterCard Memorial Cup in Shawinigan.

Register for the #TeamRogers Community Draft
17 hours ago