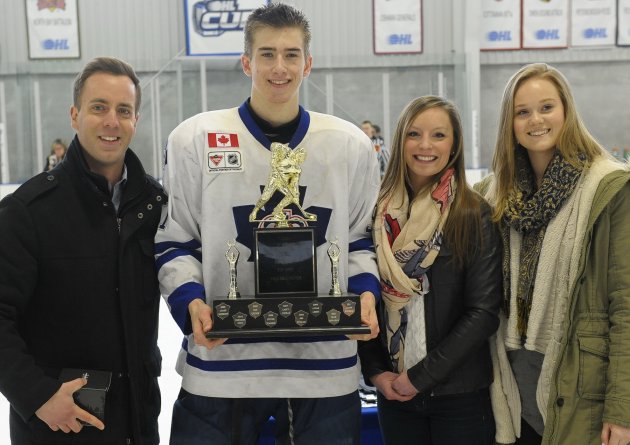 Michael McLeod of the Toronto Marlboros is the newest member of an impressive list of players to be named most valuable player of the OHL Cup.

McLeod took his game to another level with a two goal effort in the championship final of the 2014 OHL Cup Showcase Tournament to earn the Tim Adams Memorial Trophy joining a list of MVP’s that include Connor McDavid, Sean Monahan, Steven Stamkos and Sam Gagner.

The Marlboros were able to avenge their eight game GTHL championship series loss to the Toronto Jr. Canadiens with a 5-0 victory in Sunday’s final. McLeod said his team knew they couldn’t let the opportunity at redemption go by.

“That was a heartbreaking loss and we did not want to finish off the season not getting them back,” McLeod said post-game. “It feels amazing to get the final win.”

The six foot, one inch tall McLeod displayed his speed and great shot throughout the tournament to lead all goal scorers with seven along with four assists for eleven points in seven games, and said it means a lot to receive such an honour.

“I wasn’t going for it, I was just going for the win, but that on top is just amazing.”

Marlboros forward Taylor Raddysh led the tournament in scoring with 14 points in seven games and said playing with McLeod makes the game easy.

“Whenever you are open he will give you the puck and he’ll find you no matter what is wrong,” said Raddysh. “It is easy when you have him, you get the puck and it is easy to score.”

McLeod has many weapons and describes his game as of mix of different styles.

“A hard power forward at times and then like a player-maker at times,” said McLeod. “I like to use my speed and making my teammates look good.”

McLeod will be among the top picks in April’s OHL Priority Selection, but said he has areas of his game he will look to improve this summer.

Winners of this award have often gone on to impressive careers in both the OHL and NHL, and given his 2014 OHL Cup performance McLeod has shown the ability to follow in line with the greats.