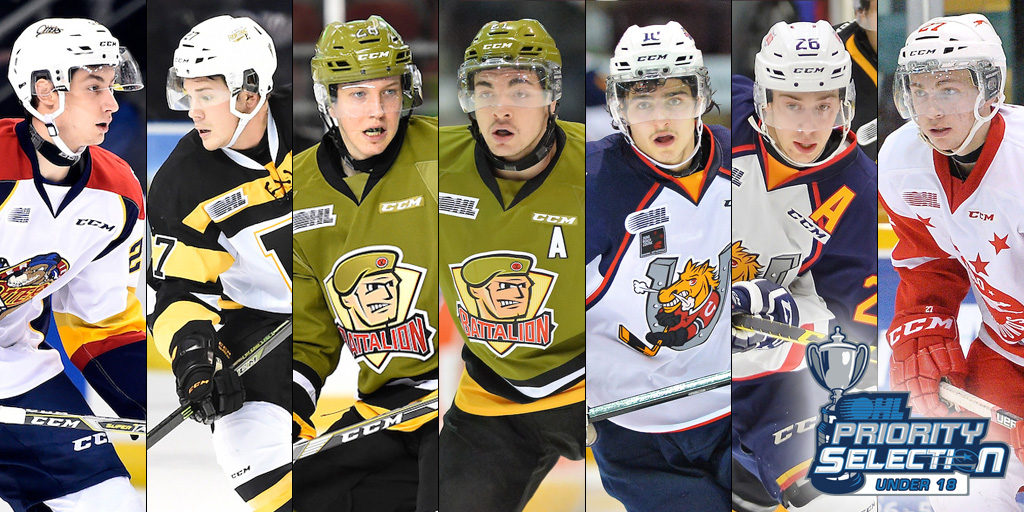 OHL member teams will choose from the top 1999 and 2000-born Midget AAA talent from across the province on Wednesday when the inaugural OHL Under-18 Priority Selection gets underway at 7:00pm.

Over the years there are many examples of players passed over in their first year of Ontario Hockey League Priority Selection eligibility only to come back stronger a year or two later and make a significant impact.

Perhaps the best known example of one of those players is 2015 Mastercard Memorial Cup overtime hero Anthony Cirelli.

A Tampa Bay Lightning prospect currently competing with the Erie Otters in the Western Conference semi-finals, Cirelli reflects on the start he had in the OHL after committing to Oshawa as a free agent following a strong Midget season with the Mississauga Reps.

“Who knows, I might have benefited from something like this a few years ago, but then I might not have wound up in Oshawa,” he said with a laugh. “I’m glad things have worked out the way they have for me, but the Under-18 Draft is a huge opportunity for these players.”

Cirelli, who claimed silver with Canada at the 2017 IIHF World Junior Hockey Championship, has developed a reputation as one of the league’s most responsible two-way centremen, a player whose speed and intelligence on both sides of the puck sets him apart from the competition.

“It sucks not being drafted, I’ve been there,” he continued. “Maybe you had an injury that slowed you down, or maybe you didn’t hit your growth spurt yet, but this is another opportunity.

“I like that the OHL has done this. It’s given more players an opportunity to live out their dream and play in the Ontario Hockey League.”

Cirelli isn’t the only Midget AAA success story the OHL has seen in recent years.

Mangiapane was never drafted by an OHL club, committing to the Colts following an outstanding Midget AAA season with the Toronto Jr. Canadiens in 2012-13. The Bolton native went on to become the fourth player in Colts franchise history to record back-t0-back 100-point seasons and just the third to score 50 goals in a campaign.

After being passed over in the 2010 OHL Priority Selection, Joseph Blandisi used a terrific Midget AAA season with the Vaughan Kings to get himself taken in the third round by the Owen Sound Attack a year later. After time in Owen Sound and Ottawa, Blandisi earned an NHL contract with the New Jersey Devils in his overage season with the Colts, going on to earn OHL Overage Player of the Year honours with 112 points.

Like Cirelli, big forward Nick Paul punched his OHL ticket while with the Mississauga Reps Midgets. He was taken a year into his OHL eligibility, being selected in the fifth round by the Brampton Battalion before making the journey north with the club. Paul was a draft pick of the Dallas Stars and played an integral role in re-launching OHL hockey in North Bay, being named the OHL’s Humanitarian of the Year in 2015.

Former Soo Greyhounds winger Michael Bunting is another example of perseverance, leading the Don Mills Flyers Midgets to an OHA Cup title before being selected in the ninth round by Sault Ste. Marie in the 2013 OHL Priority Selection. Two years older than his peers when selected, Bunting put up nearly a point-per-game in his rookie season, catching the attention of the Arizona Coyotes who took him in the fourth round of the 2014 NHL Draft.

Cirelli, Mangiapane, Blandisi, Paul, Bunting, Caron and Harland are all a great example of the skill competing in Ontario’s Midget AAA circuit, a talent source the Ontario Hockey League will tap into on Wednesday night in the inaugural Under-18 Priority Selection.