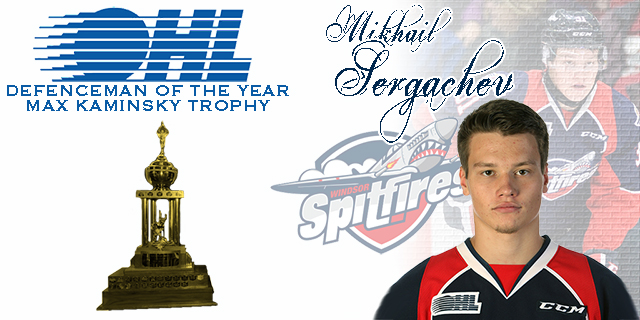 Toronto, ON – The Ontario Hockey League today announced that 2016 NHL Draft prospect Mikhail Sergachev of the Windsor Spitfires is the 2015-16 recipient of the Max Kaminsky Trophy awarded annually to the OHL’s Most Outstanding Defenceman of the Year.

Sergachev finished third in scoring among defencemen with 57 points in 67 games including 17 goals which led all blueliners in 2015-16.  Born June 25, 1998, the 17-year-old is the youngest rookie recipient of the award in OHL history and just the second rookie to win the award following Bryan Berard of the Detroit Junior Red Wings in 1994-95.

Sergachev is just six days from being the youngest OHL defenceman to ever earn the distinction, doing so at a slightly older age than Craig Hartsburg who won the Max Kaminsky Trophy as a 17-year-old sophomore with the Sault Ste. Marie Greyhounds in 1976-77.

“This is so unexpected. I’m truly honoured,” said Sergachev. “I think there were many worthy candidates, including my defence partners, who could’ve easily been named. I’m grateful to all my teammates for their support and for helping me throughout the entire year to improve as a player and a person. I’m very thankful to the coaching staff and management for never stopping coaching me and always believing in me.”

A native of Nizhnekamsk, Russia, Sergachev was chosen by the Spitfires sixth overall in the 2015 CHL Import Draft.  The 2016 NHL Draft prospect is listed eighth among North American skaters by NHL Central Scouting in their final draft rankings, and recently represented his country at the 2016 IIHF World Under-18 Championship in North Dakota.

“This recognition is a testament to how hard Misha had to work from day one,” said Spitfires Head Coach Rocky Thompson. “When he first arrived, he didn’t speak a word of English. He was thousands of miles away from home, his family. And not only did he play at the highest level night in and night out, he earned the respect of the entire organization, his coaches and, most importantly, his teammates. At just 17, he’s mature way beyond his years. I couldn’t be happier for him. He is entirely deserving of this honour.”

Sergachev finished the 2015-16 campaign offensively with 15 multi-point games including two four-point performances November 13 with a goal and three assists as part of a 7-4 win over the Mississauga Steelheads, and January 21 in a 5-3 victory over the Flint Firebirds.  One of two defencemen named to the OHL’s First All-Rookie Team, Sergachev also received Defenceman of the Month honours for March, and was recognized in the OHL’s Western Conference Coaches Poll as having the Hardest Shot, and being the third Best Offensive Defenceman.

The Max Kaminsky Trophy is awarded each year to the Most Outstanding Defenceman as selected by OHL General Managers.  All 20 clubs submitted a nominee but were not permitted to vote for their own player.  Players received five points for a first place vote, three points for a second place vote and one point for a third place vote.

Sergachev received 52 points in the voting process ahead of Toronto Maple Leafs prospect Travis Dermott of the Erie Otters who finished second with 48 voting points, and Carolina Hurricanes prospect Roland McKeown of the Kingston Frontenacs who finished in third place with 28 voting points.

The award is named in recognition of Max Kaminsky, who enjoyed a 10-year professional playing career that included four years in the NHL with Ottawa, Boston, and Montreal.  After he retired from playing, Kaminsky enjoyed a 15-year coaching career that was capped by winning the Memorial Cup with the St. Catherine’s Teepees in 1960.

Sergachev will be formally presented with the Max Kaminsky Trophy at the OHL Awards Ceremony which takes place June 7 at the Hockey Hall of Fame in Toronto.  He will also be the OHL’s nominee for CHL Defenceman of the Year to be announced on May 28 at the 2016 MasterCard Memorial Cup in Red Deer.