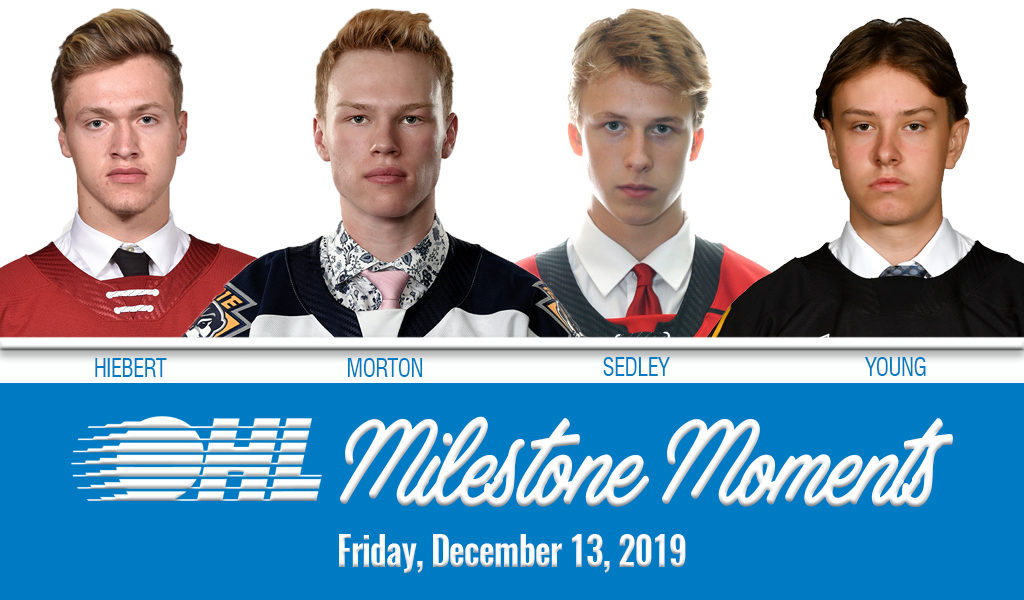 CLARK HIEBERT (GUELPH STORM):
First-year Guelph Storm defenceman Clark Hiebert scored his first career OHL goal on Friday as the Storm defeated the Windsor Spitfires 6-3. Hiebert’s goal came midway through the first period with an assist from Matthew Papais. The 18-year-old defenceman scored in his 16th game of the season. He was a ninth round pick of the Storm back in 2017 and spent last season with the Burlington Cougars Jr. A club.

CAMERON MORTON (ERIE OTTERS):
Rookie defenceman Cameron Morton scored in Erie’s 7-4 road win over the Sudbury Wolves on Friday. Morton’s first career OHL goal came 7:16 into the second period to put the Otters up 6-1. The 6-foot-1, 192Ib. defenceman from Kingston, Ont. tallied in his 29th game of the season, giving him seven points (1-6–7). He was Erie’s seventh round pick in 2018.

SAM SEDLEY (OWEN SOUND ATTACK):
Sam Sedley scored 2:39 into action on Friday as the Owen Sound Attack fell 4-2 in Sault Ste. Marie. The rookie defence man’s first OHL goal came on an assist from fellow freshman Deni Goure, giving Sedley a goal and two assists over 16 games this season. The St. Marys, Ont. native was a fourth round pick of the Attack last spring from the Huron-Perth Lakers Minor Midgets.

DAVIS YOUNG (HAMILTON BULLDOGS):
Rookie forward Davis Young rounded-out a 15-goal night at The Aud, striking for his first OHL goal with 1:52 left in the third period of a 9-6 Hamilton Bulldogs road loss in Kitchener. Young was playing in his fifth game of the season and lit the lamp for the first time in his OHL career after being a second round pick of Hamilton in the 2018 OHL Priority Selection. The Mississauga, Ont. native split last season between the Oakville Rangers and Brantford 99ers Jr. A clubs.