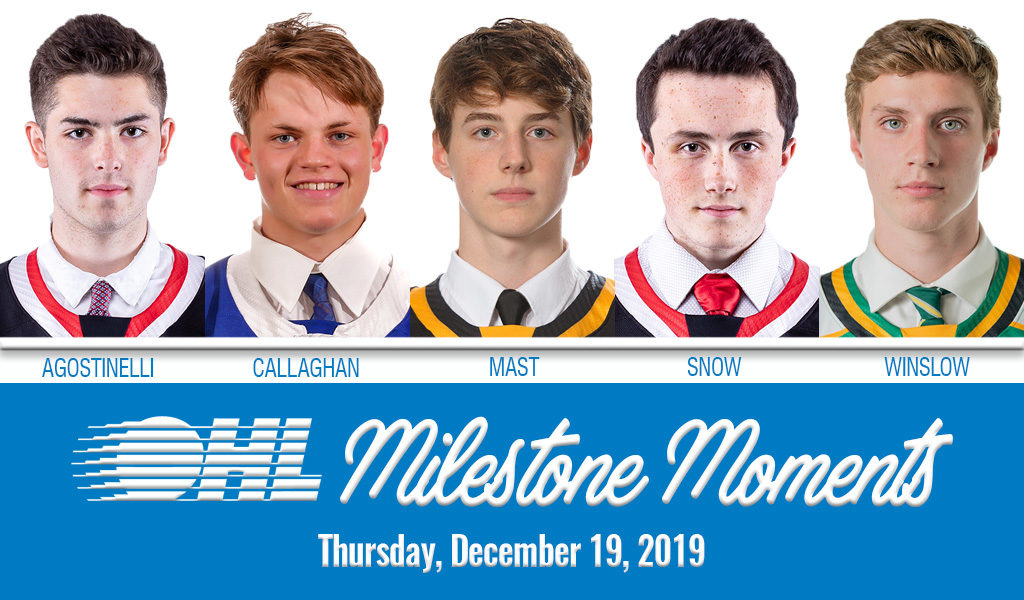 ANTHONY AGOSTINELLI (NIAGARA ICEDOGS)
IceDogs centreman Anthony Agostinelli earned his first and second OHL goals in his team’s big 11-3 victory over the Kingston Frontenacs on home ice. The 16-year-old rookie from Rochester, NY found the back of the net in the first and second periods, and also registered an assist on fellow rookie Cameron Snow’s first OHL goal towards the end of the game. Agostinelli was an eighth round pick in last April’s OHL Priority Selection, and prior to that, played with the Buffalo Jr. Sabres 16U squad.

CHARLIE CALLAGHAN (MISSISSAUGA STEELHEADS)
Mississauga Steelheads defenceman Charlie Callaghan picked up his first OHL goal in Thursday night’s close 5-4 shootout loss to the Windsor Spitfires. The 17-year-old product of Toronto scored early in the second, putting the Steelheads on the board. Callaghan saw five assists through 49 games with the Trout last season, and now has two points in his first 21 games this year. He was an eighth-round pick of the Steelheads in the 2018 OHL Priority Selection, after a 20-point season (6-14-20) through 33 games with his hometown Mississauga Reps.

RYAN MAST (SARNIA STING)
Ryan Mast’s first OHL career goal came in a tightly-fought 5-4 loss to the Saginaw Spirit. He scored 13:35 into the third period, briefly giving his Sarnia Sting a 4-3 lead. The Michigan-born defender now totals eight points (1-7-8) in his first 32 games with the Sting. Prior to being drafted by Sarnia in the ninth round of last spring’s OHL Priority Selection, Mast suited up for Compuware at the U16 and Bantam Major AAA levels.

CAMERON SNOW (NIAGARA ICEDOGS)
Thornton, Ont. native Cameron Snow also got his first and second OHL goals out of the way in Niagara’s huge 11-3 win. He scored both markers in the remaining three minutes of the game, giving his team their 10th and 11th goals. Through 25 games with the IceDogs, the centreman now carries a four-point total. A seventh round pick of the IceDogs in the 2018 OHL Priority Selection, Snow had a 101-point (46-55-101) season through 57 games with The Hill Academy U16 Prep last season.

AVERY WINSLOW (LONDON KNIGHTS)
Rookie defender Avery Winslow saw the first goal of his OHL career in what would end up as a 7-4 London Knights loss at the hands of the North Bay Battalion. Winslow’s goal came 1:17 into the third, cutting North Bay’s lead to 5-3. The Florida native was picked up by the Knights in the fifth round of the 2018 OHL Priority Selection and spent time with the Notre Dame Hounds Midget AAA and BCHL’s Wenatchee Wild prior to his commitment.