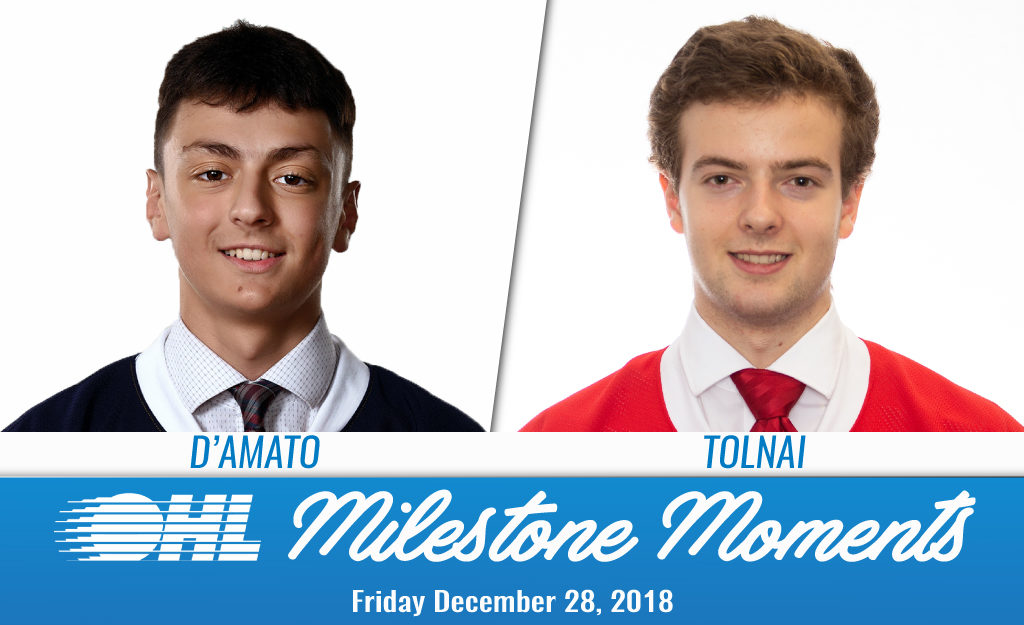 DANIEL D’AMATO (ERIE OTTERS):
Erie Otters rookie Daniel D’Amato put the cherry on top of a 9-2 road win, scoring with 1:43 remaining for his first OHL goal as the Otters trounced the Flint Firebirds. D’Amato cleaned up the garbage in the slot as fellow rookies Brendan Sellan and Jamie Drysdale picked up assists. The fourth overall of the 2018 OHL Under-18 Priority Selection, D’Amato has seven points (1-6–7) through 29 games this season. The 17-year-old from Maple, Ont. is a graduate of the Vaughan Kings Midget AAA program.

CAMERON TOLNAI (OTTAWA 67’s):
Ottawa 67’s rookie Cameron Tolnai finished off a pretty two-on-one effort with Sam Bitten to open the scoring in a 4-1 Ottawa 67’s victory over the visiting Niagara IceDogs. Ottawa’s first round (sixth overall) pick this past Spring, Tolnai struck for the first of his OHL career with 4:17 remaining in the second period. The 16-year-old from Oakville, Ont. lit the lamp in his 30th game of the season, giving him six points (1-5–6) on the campaign. Tolnai is a graduate of the Oakville Rangers Minor Midget program.