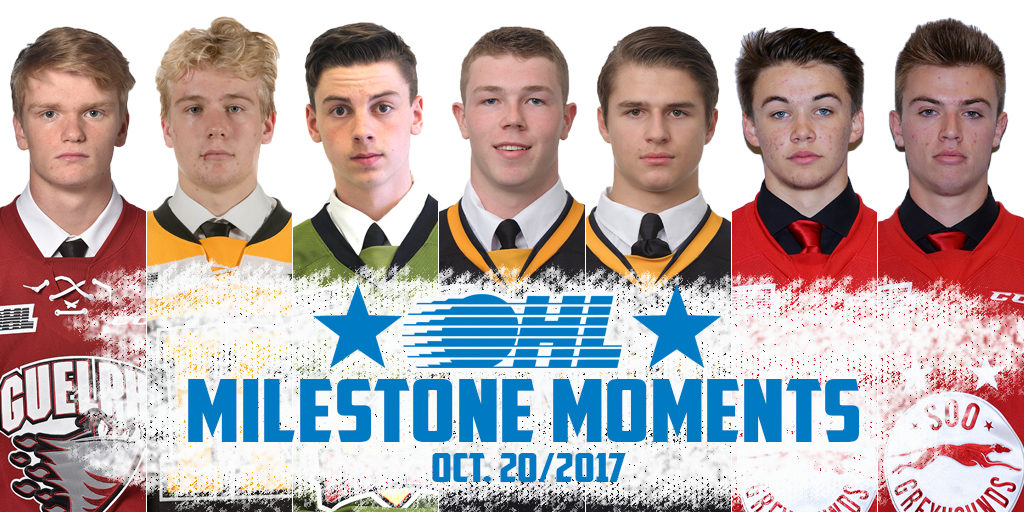 Friday was a busy night on the milestones front as seven different players scored their first career OHL goal across six different contests. A pair of those players had multi-goal outings as Sarnia’s Brayden Guy and Sault Ste. Marie’s Hayden Fowler both lit the lamp twice in victories for their respective clubs. Here’s a look at all the memorable goals from Friday.

MARK WOOLLEY (GUELPH STORM):
Rookie defenceman Mark Woolley opened the scoring for the Guelph Storm on Friday. The 15-year-old from St. Thomas, Ont. capitalized on a give-and-go with teammate Cam Hillis before ripping a shot over the shoulder of Hamilton’s Kaden Fulcher 12:33 into the first period. An Elgin-Middlesex Chiefs graduate, Woolley was chosen in the third round by the Storm last April.

BRYAN LAUREIGH (KINGSTON FRONTENACS):
Rookie winger Bryan Laureigh put a hush over the Essar Centre 8:06 into the second period on Friday, knotting the score at three as the Kingston Frontenacs overcame a 3-0 deficit. Providing Kingston’s third goal in less than two minutes, Laureigh took advantage of a Greyhounds miscue before beating goaltender Tyler Johnson over the blocker. The Hounds would go on to win the game 6-5 but Laureigh scored a goal he’ll never forget.

PATRICK BROWN (NORTH BAY BATTALION):
Patrick Brown’s first career OHL goal was one of the few bright spots for the North Bay Battalion in Mississauga on Friday. Brown jumped on a puck-playing error by Steelheads goaltender Emanuel Vella, beating across his goal line 1:39 into the second period. A 17-year-old from Midland, Ont., Brown scored the lone goal in a 7-1 loss at the Hershey Centre.

BRAYDEN GUY (SARNIA STING):
Sarnia Sting rookie winger Brayden Guy scored not once, but twice on Friday to lead his club past the Sudbury Wolves 5-2 on the road. Sarnia’s 10th straight win featured a pair of goals from Guy, with the first of his OHL career on a fine display of hand-eye coordination 2:22 into the second period. The Grand Bend, Ont. native would score again at 8:31 of the second on a nice passing play with veteran teammate Jordan Ernst. Guy’s two goals tied the score at two as the Sting charged back from a 2-0 deficit to score five unanswered.

JAMIESON REES (SARNIA STING):
Jamieson Rees showed a flash of the prolific offensive player seen at the 2017 OHL Cup, blazing down the wing to fire a quick release over the shoulder of Sudbury’s Jake McGrath for his first OHL goal just 15 seconds into the third period. Rees’ power play marker put the Sting ahead 4-2 as the first round selection helped seal the deal on the club’s 10th straight victory.

HAYDEN FOWLER (SAULT STE. MARIE GREYHOUNDS):
Hayden Fowler stepped into a shot as soon as the puck hit his stick, putting the Soo Greyhounds back in front of the Kingston Frontenacs 4-3 after they surrendered an early 3-0 lead on home ice. Fellow rookie Cole MacKay drew the primary assist on Fowler’s first in the OHL. The Kingston, Ont. native would score again just 45 seconds later to put the Greyhounds up by two. Sault Ste. Marie’s first round pick this past April, Fowler earned first star honours with two goals in a 6-5 victory.

HOLDEN WALE (SAULT STE. MARIE GREYHOUNDS):
Seventeen-year-old defenceman Holden Wale wristed a seeing-eye shot through traffic that got past Kingston’s Mario Peccia 3:13 into the second period for the first goal of his OHL career. Philadelphia Flyers prospect Morgan Frost drew the lone assist on the goal as Wale contributed to en eventual 6-5 victory over the visiting Frontenacs. The Brantford, Ont. native was Sault Ste. Marie’s fourth round pick in 2016.