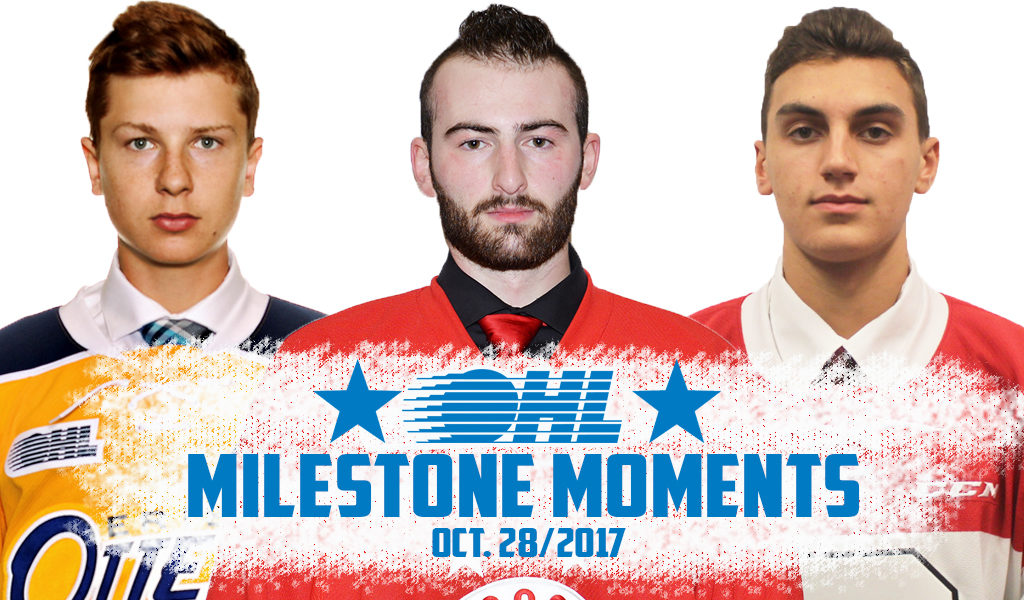 MAXIM GOLOD (ERIE OTTERS):
Maxim Golod’s first career OHL goal came on a great display of patience as he tucked a forehand effort through the legs of Guelph’s Nico Daws with just 12 seconds left in the opening period. Golod put the Otters up 3-0 in a game they’d eventually go on to win 5-4 in a shootout. The 17-year-old Concord, Ont. native finished the night with a goal and two assists. He was Erie’s 13th round pick in 2016 and has a goal and seven assists through his first 11 games of the season.

LUCAS PERIC (OTTAWA 67’s):
Rookie defenceman Lucas Peric blasted a low slapshot through the legs of Saginaw’s Cameron Lamour with 3:30 remaining in the opening period as the Ottawa 67’s went on to claim victory by a score of 11-3. Peric’s goal came with assists from Tye Felhaber and Oliver True as the 16-year-old from Georgetown, Ont. scored in his eighth career contest. Peric was Ottawa’s third round pick in the 2017 OHL Priority Selection from the Halton Hurricanes Minor Midgets.

TYLER JOHNSON (SAULT STE. MARIE GREYHOUNDS):
Tyler Johnson has made a strong impression on his new club, earning victories in each of his first two games as a Soo Greyhound. The 19-year-old stopped all 34 shots he faced in Saturday’s 7-0 road win over the Flint Firebirds to capture his first career OHL shutout. The native of Amherst, NY was acquired by the Greyhounds two weeks ago after beginning the season with the London Knights.