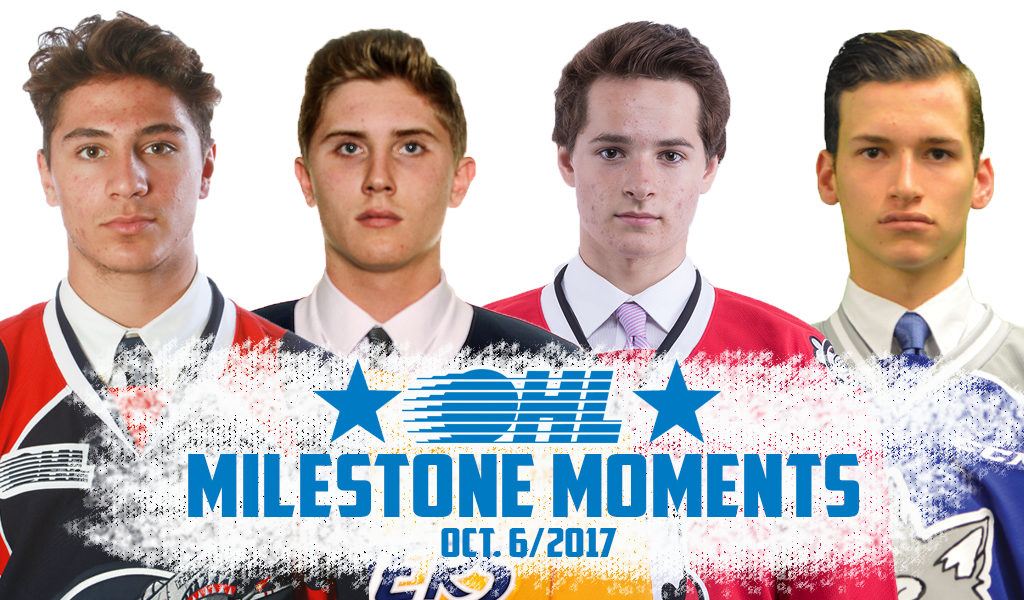 With 16 of the league’s 20 teams in action on Friday night, an additional four OHL newcomers joined the ranks of those to score their first goal in the league this season. Here’s a look at milestone moments from Friday.

DANIEL D’AMICO (WINDSOR SPITFIRES):
Daniel D’Amico‘s first OHL goal turned out to be a big one as he helped the Windsor Spitfires defeat the Guelph Storm 2-1 on the road. D’Amico barrelled down the middle, crashing the net to capitalize on a loose puck in the goalmouth to give the Spits a 1-0 lead. The 16-year-old native of Caledon, Ont. scored in his third career game after being a sixth round pick by the Spitfires in the 2017 OHL Priority Selection from the Toronto Marlboros.

JOSEPH MACK (ERIE OTTERS):
Joseph Mack‘s first career OHL goal cut what had initially been a 4-0 deficit in Kitchener to just one goal as the Otters put on a third period surge but ultimately came up a little short in a 5-3 road loss. Christian Girhiny and Patrick Fellows recorded assists on Mack’s first at 13:48 of the third period that saw the 17-year-old charge down the middle and put a rebound past Kitchener’s Anthony Dumont-Bouchard. A native of New Hudson, Mich., Mack was Erie’s eighth round pick in the 2016 OHL Priority Selection.

IAN MARTIN (NIAGARA ICEDOGS):
No doubt playing in front of some friends and family in Oshawa on Friday, Scarborough, Ont. native Ian Martin‘s first OHL goal helped the Niagara IceDogs claim a 5-4 overtime win over the Generals. After the Dogs won an offensive zone draw, Martin collected a loose puck and ripped it over the shoulder of Oshawa’s Logan Gauthier 11:24 into the first period. A graduate of the Ajax-Pickering Raiders Minor Midgets, the 16-year-old Martin was Niagara’s third round pick back in April.

DAWSON BAKER (SUDBURY WOLVES):
Dawson Baker‘s first OHL goal came with six minutes remaining in the second period with rookie blueliner Zack Malik drawing an assist. Baker helped keep the Wolves in the game though they’d eventually go on to drop a 5-4 road decision against the Mississauga Steelheads. A 17-year-old native of Baltimore, Ont., Baker was Sudbury’s fourth round pick in 2016.