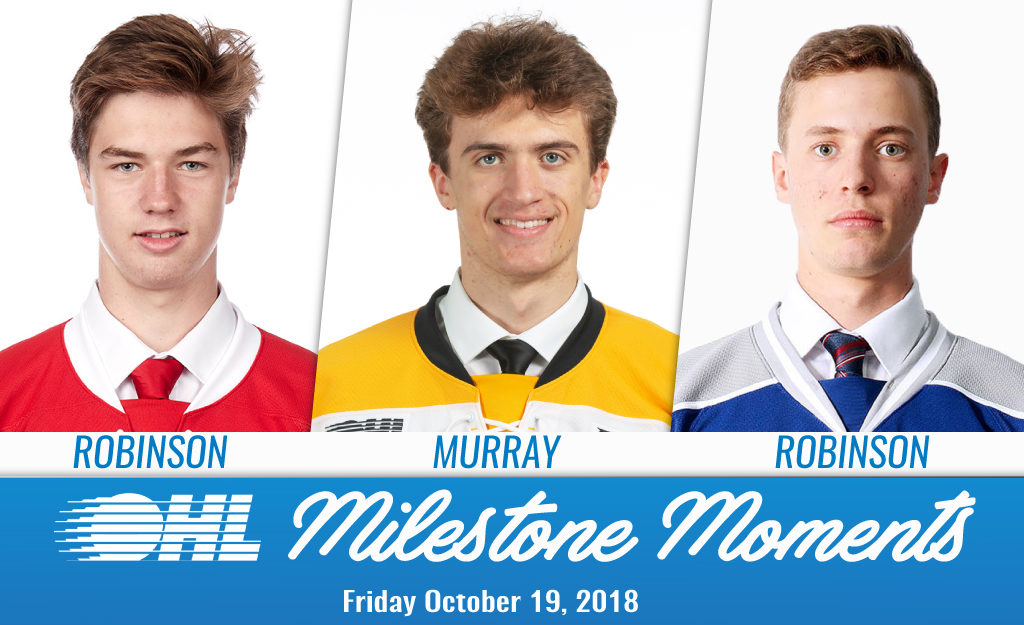 DYLAN ROBINSON (OSHAWA GENERALS):
Oshawa Generals rookie Dylan Robinson buried a rebound on the doorstep for his first OHL goal, contributing to a 4-2 road win in London. Nando Eggenberger and Matt Brassard picked up assists as Robinson opened the scoring 2:41 into action. The 16-year-old later added an assist on a goal by Eggenberger early in the second period. A second round pick by Oshawa in the 2018 OHL Priority Selection, Robinson was a standout with the OHL Cup champion Toronto Jr. Canadiens last season, recording 84 points (29-55–84) over 55 games. He is the younger brother of Kitchener Rangers graduate Brandon Robinson.

JACOB MURRAY (KINGSTON FRONTENACS):
Kingston Frontenacs first round pick Jacob Murray exhibited patience on his first OHL goal, waiting for a lane to open up before he snapped a wrister over the shoulder of Sault Ste. Marie’s Ethan Taylor. Murray’s goal 5:42 into the second period came with assists from Jacob Robertson and Brett Neumann. His first goal comes in his 11th game of the season. A graduate of the Oakville Rangers Minor Midgets, Murray was the 13th overall pick of the 2018 OHL Priority Selection after recording 34 points (9-25–34) in 35 games last season.

OWEN ROBINSON (SUDBURY WOLVES):
A tenacious forecheck led to Owen Robinson‘s first OHL goal, one that stood as the game winner on Friday. Robinson’s Wolves defeated the visiting Hamilton Bulldogs 7-5 as Robinson netted the difference-maker 12 seconds into the third period with an assist from Macauley Carson. Robinson’s big night also included three assists, giving him the first four points of his OHL career. The 10th round pick this past spring spent last season with the NOJHL’s Blind River Beavers where he put up 56 points (22-34–56) over 51 games before being drafted as an 18-year-old.