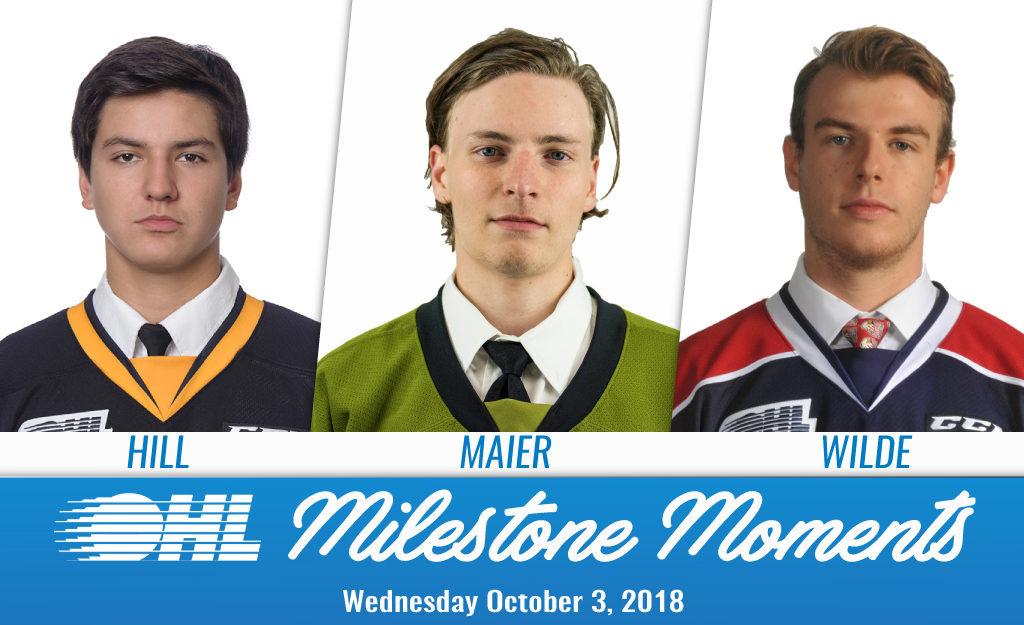 THEO HILL (SARNIA STING):
Sarnia Sting rookie Theo Hill scored his first OHL goal on a wicked release Wednesday night in Owen Sound. The Hagersville, Ont. native took a pass from fellow rookie Justin McCombs before snapping a shot over the shoulder of Mack Guzda midway through the second period. The Sting fell 5-2, but Hill’s night was one to remember as the fifth round pick this past spring got onto the scoresheet. Hill is a graduate of the 2018 ALLIANCE champion Brantford 99ers.

DAVID MAIER (NORTH BAY BATTALION):
David Maier‘s first career goal was part of a two goal, one assist performance as the North Bay Battalion defeated visiting Ottawa 4-3. Maier’s first came unassisted 7:16 into the second period to give the Troops a 3-2 lead. He struck again on a point wrister with 6:49 left in the third period, scoring the game winner on the power play with assists from Brad Chenier and Justin Brazeau. The Klagenfurt, Austria native was North Bay’s second round pick in the 2018 CHL Import Draft and has five points (2-3–5) through five OHL matchups.

BODE WILDE (SAGINAW SPIRIT):
Highly touted blueliner Bode Wilde scored his first career marker on Wednesday as the Saginaw Spirit took a 6-2 road win in Flint. After setting up Damien Giroux for his first of the season late in the first period, Wilde got a shot through on the power play 7:47 into the third with an assist from Albert Michnac. A second round pick of the New York Islanders this past summer, Wilde finds the back of the net in his fourth game of the season, giving him a goal and five assists thus far.