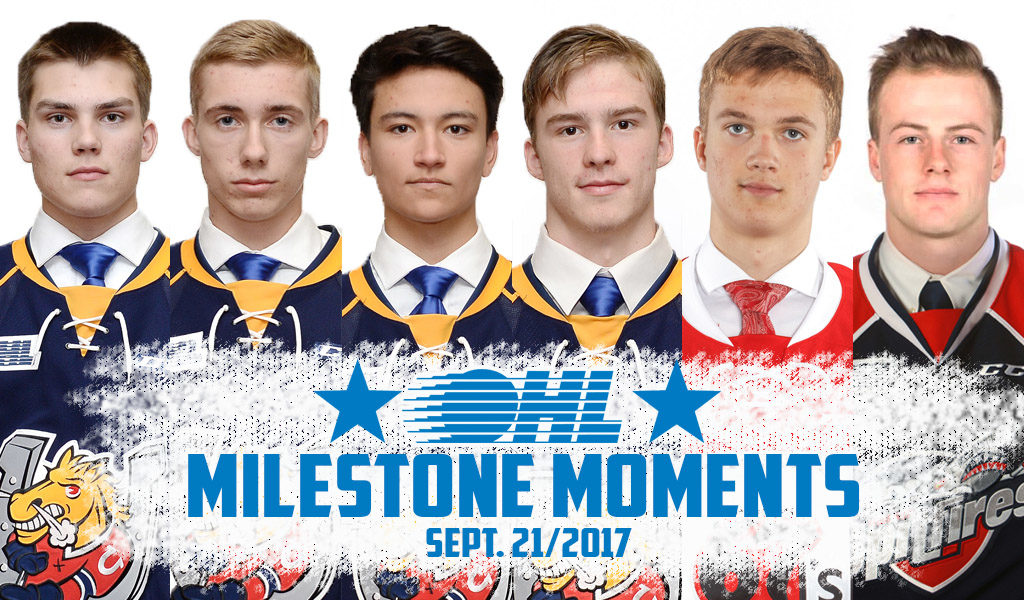 Six players enjoyed a memorable Opening Night in the OHL on Thursday, scoring their first career goal before big crowds eager to take in another season of exciting OHL action. Here’s a look at Thursday night’s milestones.

NATHAN ALLENSEN (BARRIE COLTS):
Barrie’s second round pick in the 2017 OHL Priority Selection, defenceman Nathan Allensen scored the club’s first goal of 2017-18, wiring a point wrister over the shoulder of Ottawa’s Olivier Tremblay 2:41 into action. Jaden Peca and Curtis Douglas drew assists on the goal. Allensen’s night featured a goal, two assists and a plus-5 rating.

LUKE BIGNELL (BARRIE COLTS):
There’ll be some fun and games in the Bignell household after Thursday’s big Colts victory. While it took older brother Adam, a defensive-minded rearguard who played from 2010-15 with the Belleville Bulls over 200 games to score his first OHL goal, Luke Bignell found the back of the net in his first. Barrie’s fifth round pick in 2016, the 16-year-old got on the board 2:19 into the second period with assists from Nathan Allensen and Kirill Nizhnikov.

RYAN SUZUKI (BARRIE COLTS):
The 2017 first overall OHL Priority Selection choice started his career with a bang, lighting the lamp for the first time 7:44 into the second period on an assist from Lucas Chiodo. Suzuki finished his first OHL contest with a goal and an assist along with a plus-3 rating in an 11-2 win over visiting Ottawa.

ANDREI SVECHNIKOV (BARRIE COLTS):
The top selection in the 2017 CHL Import Draft, Andrei Svechnikov didn’t disappoint in his OHL debut, scoring his first career goal 10:22 into the first period with assists from fellow Russian countrymen Alexey Lipanov and Kirill Nizhnikov. Svechnikov finished the night with a pair of goals.

SEVA LOSEV (OTTAWA 67’s):
Ottawa’s third round choice in the 2017 OHL Under-18 Priority Selection, Seva Losev provided one of the few bright spots in an otherwise disappointing night for the 67’s who fell 11-2 in Barrie. His first career OHL goal came 6:12 into the third period with assists from Sam Bitten and Kody Clark.

JAKE SMITH (WINDSOR SPITFIRES):
While he scored 32 goals in the QMJHL over the past two seasons, recently signed overage forward Jake Smith potted his first OHL marker in Thursday’s home opener win over Saginaw. Smith found the empty net with 1:12 to spare, giving the Spits some insurance with assists from Aaron Luchuk and Mathew MacDougall.