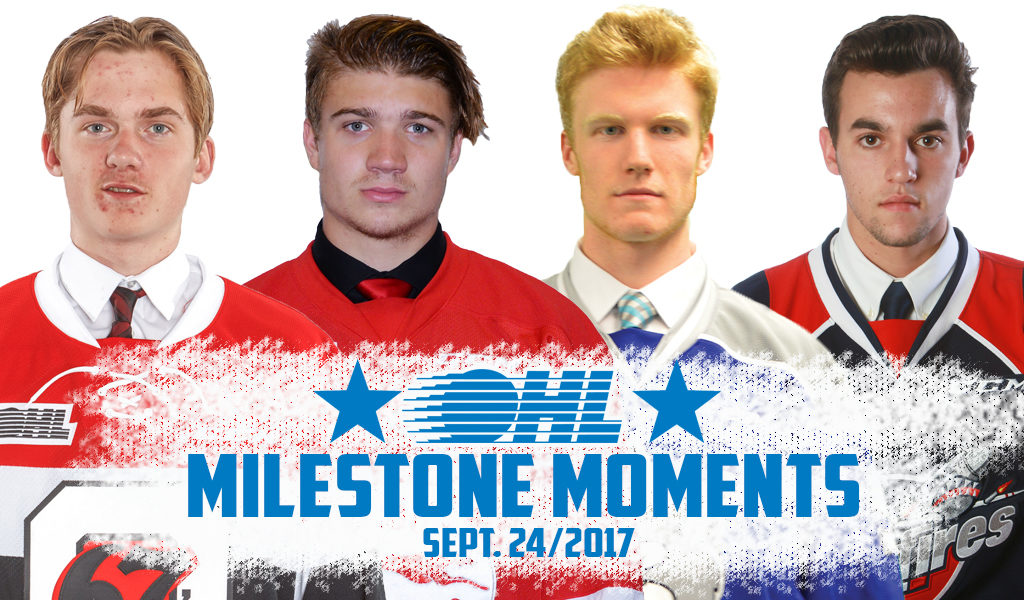 With four games around the league on Sunday came four first goals, one from each game. An eventful weekend yielded a total of 21 first goals across the league. Here’s a look at Sunday’s milestone markers.

GRAEME CLARKE (OTTAWA 67’s):
2017 sixth overall OHL Priority Selection choice Graeme Clarke was in the right place at the right time to score the game winner in the Ottawa 67’s home opener on Sunday. Planted in the slot, Clarke delivered a quick release when linemate Austen Keating fed the puck through the middle to make the score 5-3 in an eventual 6-4 win over the Erie Otters. Keating finished the night with three goals and an assist while Clarke, who starred with the Toronto Marlboros Minor Midgets last season, came away with his first OHL goal.

KEEGHAN HOWDESHELL (SAULT STE. MARIE GREYHOUNDS):
A 19-year-old who joined the Hounds over the summer after spending last season with the USHL’s Muskegon Lumberjacks, Keeghan Howdeshell picked his spot on the power play and hit it, lighting the lamp for the first time in his OHL career. Howdeshell beat London Knights goaltender Tyler Johnson low on the glove side as the Greyhounds claimed a 5-1 home ice victory. Howdeshell was a 10th round pick by the Hounds in 2014 and has enjoyed considerable international success with USA Hockey, winning U17 silver in 2014 followed by U18 bronze in 2016.

NOLAN HUTCHESON (SUDBURY WOLVES):
Rookie winger Nolan Hutcheson scored his first OHL goal just 43 seconds into the first period on Sunday, slipping away from his check in the slot to bury a loose puck past North Bay’s Julian Sime. Linemate Michael Pezzetta did laymen’s work to get the puck through the slot for Hutcheson who made no mistake. The Wolves would go on to lose 6-5 in the final seconds of the third period, but Hutcheson found the scoresheet for the first of what the Wolves are hoping will be many times in his OHL career. The Kingston, Ont. native was the club’s fourth round pick in 2016 and spent last season with the Greater Kingston Frontenacs Midgets.

MATHEW MACDOUGALL (WINDSOR SPITFIRES):
Seventeen-year-old rookie Mathew MacDougall got in on the scoring in Windsor on Sunday, helping the Spitfires defeat the visiting Guelph Storm 4-0. MacDougall made the most of his opportunity with 3:04 remaining in the opening period as veteran linemate Aaron Luchuk won a puck battle below the goal line and made a centering feed that was quickly deposited past Guelph’s Anthony Popovich. A former OHL Cup champion with the York-Simcoe Express, MacDougall was acquired from the Barrie Colts this past summer after being a third round pick in the 2016 OHL Priority Selection.