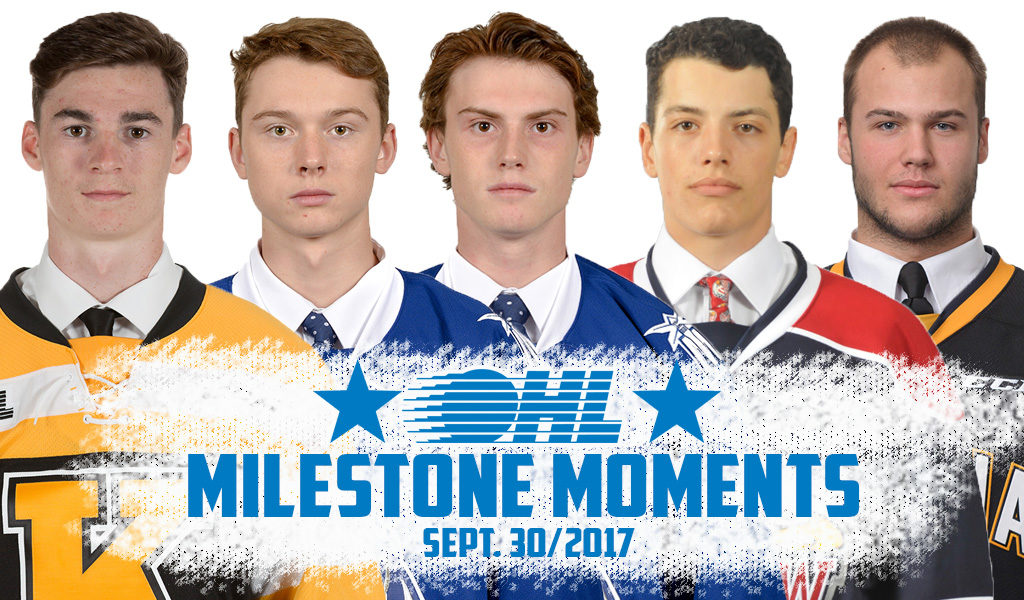 CAL DAVIS (KINGSTON FRONTENACS):
Eighteen-year-old winger Cal Davis scored the first goal of his OHL career on Saturday, giving the Kingston Frontenacs a 2-0 lead 2:06 into the opening frame. Things for the Fronts went downhill from there in Sarnia as they eventually fell 6-2, but Davis got his first one in his 47th career regular season contest. The Peterborough native got his stick on a puck through the slot, redirecting it through the legs of Sarnia’s Justin Fazio. A former second round pick of the Niagara IceDogs in 2015, Davis was acquired by the Frontenacs last season.

COLE SCHWINDT (MISSISSAUGA STEELHEADS):
The Mississauga IceDogs made a valiant attempt at a comeback on Saturday in Owen Sound but came up just short in a 6-4 loss. Cole Schwindt sparked that third period comeback attempt when he scored his first career OHL goal with 3:10 remaining on the clock. The 16-year-old from Kitchener displayed some quick hands below the goal line, banking a shot into the net off Owen Sound goaltender Zack Bowman to cut the Attack lead to two in the final minutes. A graduate of the Kitchener Rangers Minor Midget program, Schwindt was Mississauga’s fourth round pick this past April.

KEEAN WASHKURAK (MISSISSAUGA STEELHEADS):
Keean Washkurak was the beneficiary of an outstanding Shaw Boomhower centering feed to find his first career OHL goal 12:53 into the second period on Saturday in Owen Sound. Washkurak was in the right place at the right time to provide the finish and tie the score at one. The 16-year-old Waterloo native’s first OHL tally came in just his fourth regular season contest after he was the club’s second round (30th overall) pick from the Waterloo Wolves Minor Midgets last spring.

NICHOLAS PORCO (SAGINAW SPIRIT):
Fourth overall 2017 OHL Priority Selection choice Nicholas Porco picked up his first OHL goal at home to the Guelph Storm on Saturday. The 16-year-old Sault Ste. Marie native fished a loose puck out from a maze of skates in the goal mouth before stuffing a low shot through the legs of Guelph’s Anthony Popovich at 10:10 of the second period. The GTHL Player of the Year with the Vaughan Kings last season, Porco joins a growing list of 2017 selections to light the lamp for the first time in their OHL careers.

HUGO LEUFVENIUS (SARNIA STING):
Eighteen-year-old Swedish winger Hugo Leufvenius scored not once, but twice on Saturday as the Sting defeated the visiting Kingston Frontenacs 6-2. Down 2-0, the 6-foot-3, 224Ib. winger got Sarnia on the board 34 seconds into the second period on a feed from new linemate Jordan Kyrou. Leufvenius would hit the empty net late in the third period. He finished the night with five shots on goal. Leufvenius was Sarnia’s first round (22nd overall) pick in the 2017 CHL Import Draft.