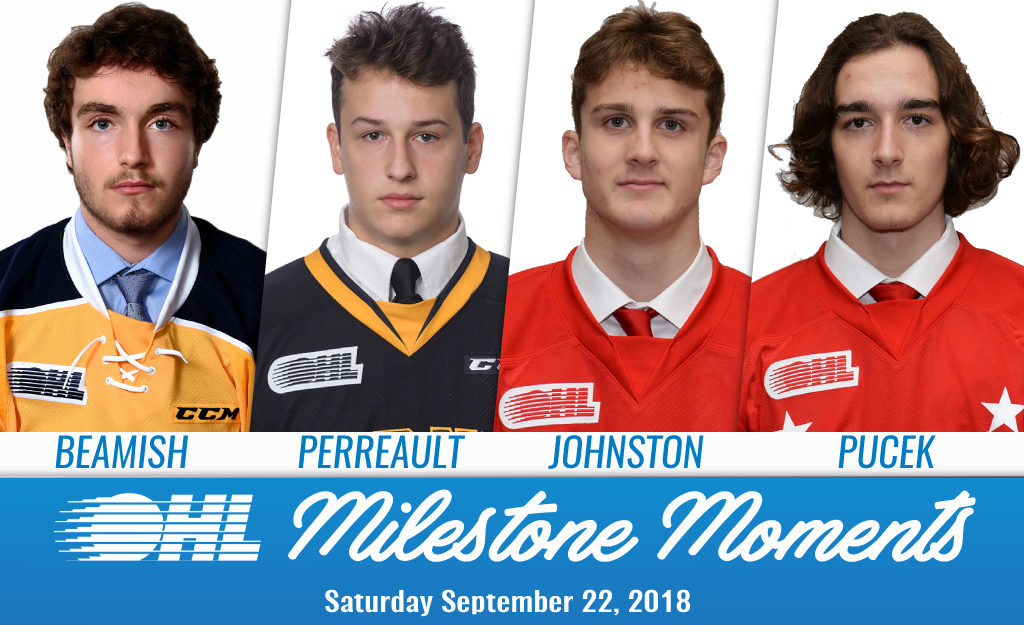 Saturday’s action featured a quartet of first goals as Luke Beamish, Jacob Perreault, Alex Johnston and Roman Pucek all scored in victories for their respective clubs. Let’s rewind the highlight reel and revisit some milestone markers.

LUKE BEAMISH (ERIE OTTERS):
Second-year defenceman Luke Beamish is the first Erie Otters goal-scorer of the 2018-19 season, opening the floodgates in what eventually became a 12-1 home opening romp over the visiting Flint Firebirds. After taking a pass from Kurtis Henry, Beamish took advantage of the space left to him as he walked in on the Flint goal and beat Luke Cavallin on the backhand at 6:28. Acquired from the Owen Sound Attack last season, Beamish is a graduate of the Halton Hurricanes Minor Midget program and was a third round pick in the 2016 OHL Priority Selection.

JACOB PERREAULT (SARNIA STING):
A lightning quick release gave Jacob Perreault his first career OHL goal as he beat Saginaw’s Cameron Lamour upstairs with 7:42 left in the opening period on Saturday. Perreault’s first of two goals on the night helped the Sting defeat the Saginaw Spirit 6-2 as Sarnia’s first round pick this past April gave fans an early glimpse of what they can expect moving forward. A product of Hinsdale, Ill., Perreault led the HPHL’s U16 circuit in scoring last season as a member of the Chicago Mission.

ALEX JOHNSTON (SAULT STE. MARIE GREYHOUNDS):
Alex Johnston went to the net hard and was rewarded, scoring his first OHL goal with 2:46 remaining in the opening period of a 6-0 Soo Greyhounds home opening victory over the North Bay Battalion. Johnston teamed up with Rory Kerins and Brett Jacklin on the goal before netting a second early in the second period. Johnston had an assist in Sault Ste. Marie’s season opener on Wednesday, giving him three points in his first two OHL contests. The 16-year-old was a sixth round pick by the Hounds in the 2017 OHL Priority Selection.