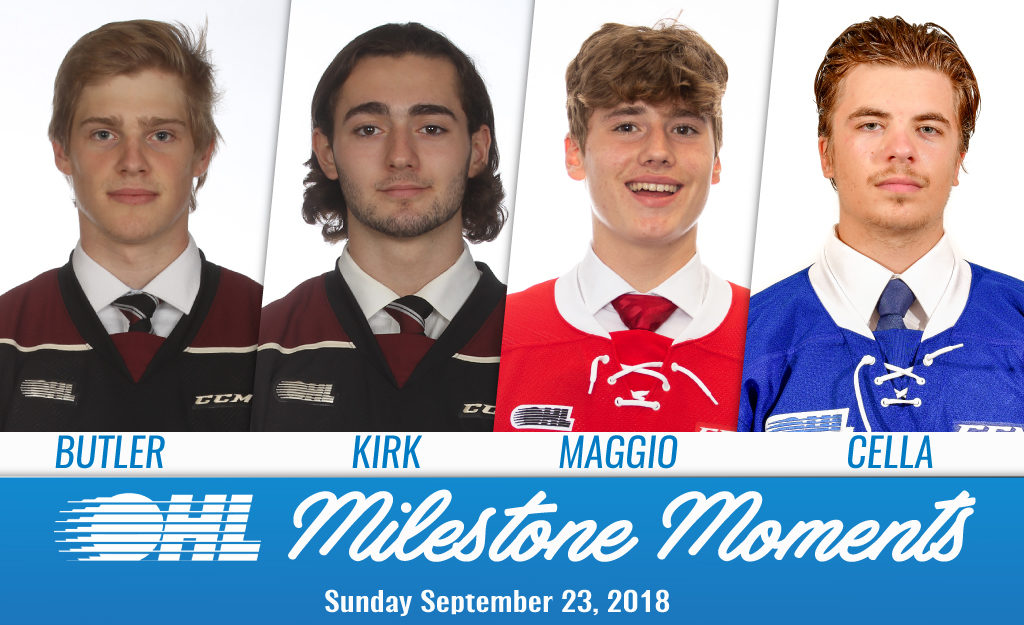 CAMERON BUTLER (PETERBOROUGH PETES):
Cameron Butler picked up a head of steam, beat two 67’s and slipped a quick release past Will Cranley for his first OHL goal on Sunday afternoon. Butler contributed in a 7-3 win for his club, scoring with 13:06 left in the third frame with assists from Declan Chisholm and Cole Fraser. The 6-foot-4, 197Ib. Butler was an OMHA champion with the York-Simcoe Express Minor Midgets last season before becoming Peterborough’s second round (27th overall) pick.

LIAM KIRK (PETERBOROUGH PETES):
The British star has arrived. Arizona Coyotes prospect Liam Kirk stripped a 67’s defender of the puck at the offensive blue line before snapping a wrister over the shoulder of Cedrick Andree 6:27 into the second period of a 7-3 Peterborough Petes win. The unassisted milestone marker came in Kirk’s second game of the season, helping his club become the OHL’s first to go 2-0-0-0 out of the gate. A native of Maltby, England, Kirk was chosen with the ninth overall pick of the 2018 CHL Import Draft.

MATTHEW MAGGIO (OTTAWA 67’s):
Matthew Maggio’s first OHL goal came 4:55 into the third period as he finished off a Sam Bitten cross-crease feed off the rush. The 2018 ALLIANCE Minor Midget Player of the Year, Maggio was selected by the 67’s in the fifth round last spring. He is a graduate of the Sun County Panthers program and hails from Tecumseh, Ont.

JAKE CELLA (MISSISSAUGA STEELHEADS):
Eighteen-year-old defenceman Jake Cella blasted home the first goal of his OHL career for one of 14 goals scored between his Steelheads and the victorious Niagara IceDogs. The free agent signing from Vaughan, Ont. tallied with 5:29 left in the second period as Richard Whittaker and Thomas Harley each contributed one of their three assists on the afternoon. Cella joins the Steelheads after playing for the OJHL’s Newmarket Hurricanes Jr. A club last season.