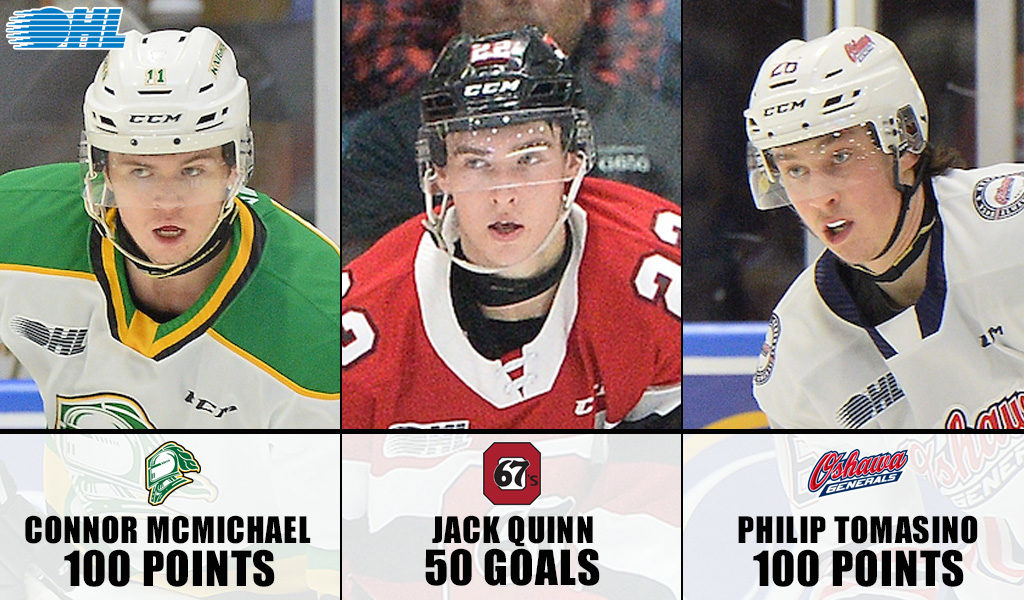 Three of the OHL’s top offensive producers reached big single season milestones over the weekend. Here’s a closer look at the accomplishments of Jack Quinn, Connor McMichael and Philip Tomasino.

A product of nearby Cobden, Ont., the Ottawa 67’s star becomes the League’s second 50-goal scorer of the season following in the footsteps of Peterborough’s Nick Robertson. He gives the Barber Poles 50-goal scorers in back-to-back seasons after Tye Felhaber finished the season with 59 in 2018-19.

Washington Capitals prospect Connor McMichael scored twice and added an assist in Friday’s 4-1 win over the Sarnia Sting to reach 100 points on the campaign.

The Ajax, Ont. native becomes the first player to put up 100 points in a full season with the green and gold since the trio trio of Christian Dvorak, Mitch Marner and Matthew Tkachuk did so during London’s unforgettable 2016 Memorial Cup championship season.

McMichael’s third OHL season has featured an incredible six hat-tricks and 17 games in which he’s posted at least three points on the scoresheet, bringing him to 47 goals, 55 assists and 102 points to close out the weekend.

A first round (25th overall) pick of the Washington Capitals last summer, McMichael was part of Canada’s gold medal-winning squad at the 2020 IIHF World Junior Hockey Championship in January.

💯 points on the year for Connor McMichael! pic.twitter.com/tLepBPLIVp

Nashville Predators prospect Philip Tomasino of the Oshawa Generals reached triple digits over the weekend, recording a goal and an assist in Friday’s 4-3 shootout loss to the Guelph Storm.

The 19-year-old from Mississauga, Ont. has split the season between Oshawa and Niagara, accumulating 43 points (18-25–43) in 26 games since joining the Generals in early January. He becomes the first player since Brett MacLean and John Tavares in 2007-08 to record his 100th point in a Generals uniform.

Tomasino, who has 40 goals and 60 assists on the season, looks as though he’s a big part of the Generals’ plans both in the present and future as the club has put forward a bid to host the 2021 Memorial Cup Presented by Kia.