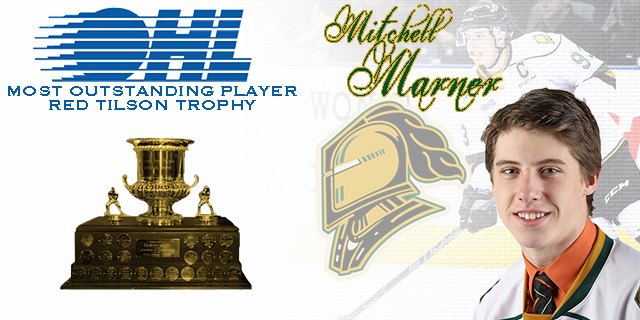 London, ON – The Ontario Hockey League today announced that Toronto Maple Leafs prospect Mitch Marner of the London Knights is the 2015-16 recipient of the Red Tilson Trophy awarded to the OHL’s Most Outstanding Player of the Year as voted by the writers and broadcasters that cover the league.

Marner finished third in OHL scoring with 116 points in 57 games eclipsing the century mark for the second straight season powered by 39 goals and 77 assists with a plus-45 rating that tied for fourth best in the league.

Marner and linemates Christian Dvorak and Matthew Tkachuk combined for an incredible 344 points (121 goals) this season as the Knights led the league with 319 goals for and finished second in the OHL with 51 wins and 105 points.  The Knights’ co-captain registered a point in 52 of his 57 games played including 31 multi-point performances and highlighted by a trio of five-point efforts.  His 21-game point-streak from October 17 to January 9 was tied for the longest in the OHL this season.  Marner’s offensive abilities not only dazzled fans but made an impression on Western Conference Coaches who voted him Best Playmaker and Best Stickhandler in the annual regular season poll.

“It has been fun to watch Mitch develop into the player he is today and also mature as a young man who has embraced the role of a leader and captain,” said Knights general manager Basil McRae. “The exciting part is I believe Mitch is just scratching the surface of how good he can be and will be as he continues to grow and work on his game.” 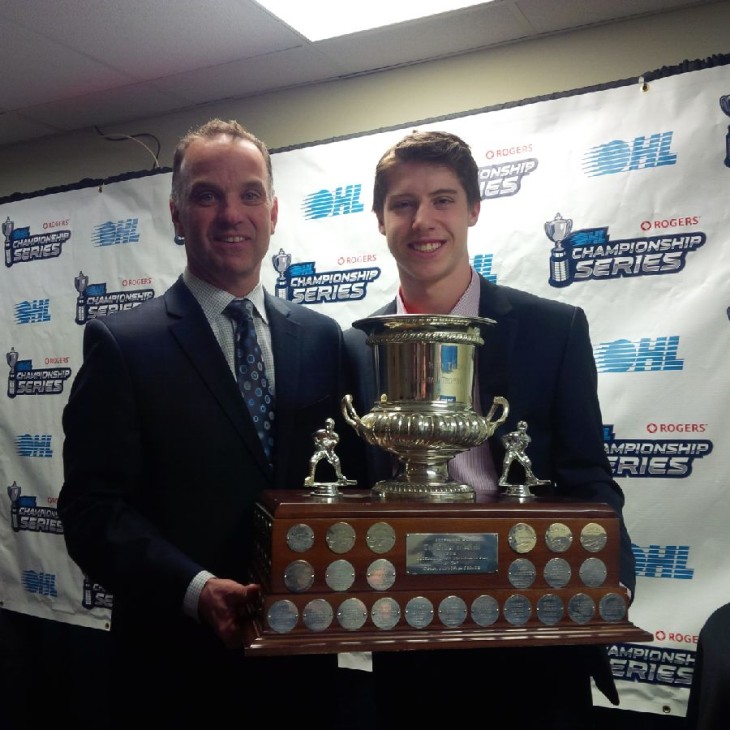 An 18-year-old from Thornhill, ON, Marner turns 19 on May 5 when the Knights open the Rogers OHL Championship Series at home to the Niagara IceDogs.  His OHL career began after being chosen 19th overall by the Knights in the 2013 OHL Priority Selection and has since surpassed the 200 assist (205) and 300 point (301) milestones in 184 games over the course of his

three-year career to date.  Marner was selected by the Maple Leafs fourth overall in the 2015 NHL Draft and signed his entry-level contract with the club in July.  He is also the team’s nominee for OHL Humanitarian of the Year, and represented Canada at the 2016 IIHF World Junior Championship in Finland tying for the team lead in scoring with six points in five games.

“Mitch has shown his great passion, determination and skill throughout this entire Ontario Hockey League season and is very deserving of this distinction,” said Toronto Maple Leafs general manager Lou Lamoriello. “The Maple Leafs organization is very proud of Mitch being named OHL Player of the Year and wish him, and the Knights, continued success in the playoffs.”

The Red Tilson Trophy is the most prestigious individual award presented by the Ontario Hockey League.  First presented in 1945, the trophy is named in honour of Albert “Red” Tilson, who was killed in action in Europe during World War II. Tilson was the OHA scori

Accredited media were asked to select their top three choices from the 20 nominees submitted by all 20 member clubs.  Players received five points for a first place selection, three points for second place and one point for a third place selection.  Marner received 186 points in the voting process ahead of Overage Player of the Year and San Jose Sharks prospect Kevin Labanc of the Barrie Colts who finished second in voting with 167 voting points, followed by Most Sportsmanlike Player and Los Angeles Kings prospect Mike Amadio of the North Bay Battalion who finished in third with 99 voting points.  The trio of Marner, Labanc, and Amadio received close to 80% of all submitted votes. 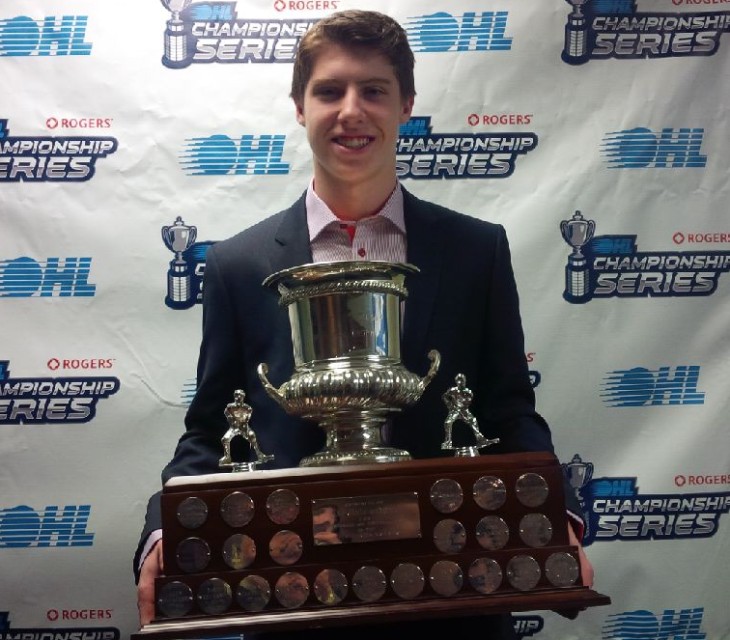 The Red Tilson Trophy winner is the OHL’s nominee for the Canadian Hockey League Player of the Year Award presented at the CHL Awards Ceremony during the 2016 MasterCard Memorial Cup in Red Deer.  Marner will also be formally presented with the award at the OHL’s Awards Ceremony on Tuesday June 7 at the Hockey Hall of Fame in Toronto.