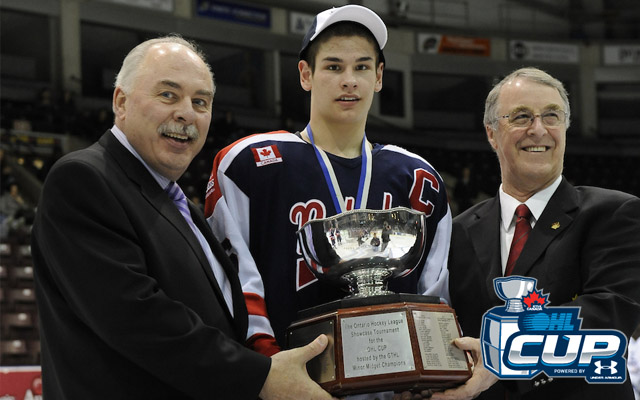 Sean Monahan’s 2010 Mississauga Rebels are the only Wild Card entry to win an OHL Cup title, but that’s all about to change.

The Toronto Nationals and Mississauga Reps clash in the first ever all-Wild Card entry OHL Cup Powered by Under Armour Championship Final tonight at the Mattamy Centre in Toronto.

Regardless of who wins, a new Wild Card champion will be crowned.

The story behind the 2010 Rebels is an intriguing one.

After finishing fifth in the GTHL regular season, they were swept out of the first round by the Mississauga Reps, the same team they defeated in the OHL Cup Round Robin to earn a spot in Saturday’s Quarter-Final.

Monahan assisted on a goal by eventual Ottawa 67’s teammate Brett Gustavsen in a Championship clash with the high-powered Toronto Marlboros before scoring the game winner with 4:44 left in the third period.

“You need those special performances (to win tournaments),” Marlies coach Dan Brown told the Toronto Star’s Lois Kalchman of Monahan’s play post-game. “(The Rebels) are very solid defensively. We weren’t able to get quality shots at their goaltender (Robert Adamo) but he was solid.”

With that tale etched in the OHL Cup history books, it’s time for the writing of the final chapter of another tonight at historic Maple Leaf Gardens in Toronto as the GTHL regular season’s first and second place Nationals and Reps give it all they’ve got for the ultimate prize.

The Reps are in their first OHL Cup Final after failures to reach the playoff round in prior appearances in 2015 and 2010.

It’s two GTHL opponents but without the Toronto Marlboros involved for the first time in 10 years, this game features a whole new look.

Tune in at 6:30pm when the Toronto Nationals and Mississauga Reps go head-to-head for the 2017 OHL Cup Powered by Under Armour Championship on Sportsnet Ontario.