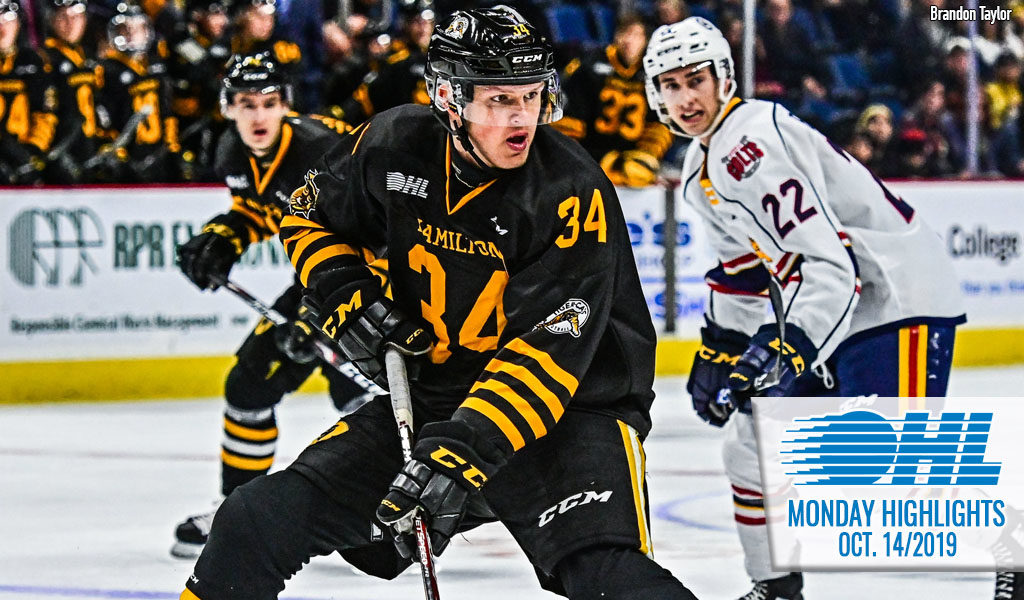 HAMILTON 7, BARRIE 5
The Hamilton Bulldogs did their local CFL football team proud on Thanksgiving Monday, scoring a touchdown along with an extra point decked out in TiCats themed jerseys. The Bulldogs beat visiting Barrie 7-5 as Los Angeles Kings prospect Arthur Kaliyev (9, 10) scored a highlight reel lacrosse-style goal in the third period. Kaliyev and Jan Jenik (4, 5) both scored twice on the afternoon and finished with four points apiece while Logan Morrison (2) had a goal and three assists. The two teams were tied at four after two periods before the Bulldogs outgunned the Colts in the final 20 minutes. Jake Gravelle (1) and Tag Bertuzzi (3) also scored Hamilton goals while Zachary Roy made 26 saves in goal. Barrie’s Tyson Foerster (6, 7) had two goals and an assist for Barrie while other goals came from Matej Pekar (8), Riley Piercey (3) and Luke Bignell (3). The Bulldogs earn their third straight win, improving to 4-5-0-0 while Barrie falls to 5-2-0-1.
GAME CENTRE

NORTH BAY 7, SOO 5
The North Bay Battalion ran wild on the power play, going 5-for-6 in a 7-5 win over the visiting Soo Greyhounds. Matthew Struthers (3, 4, 5) earned his second career OHL hat-trick along with two assists for a five point afternoon as the Troops put up a crooked number offensively for the second straight game. Kyle Jackson’s (1) goal with 4:19 to go in the third period stood as the game winner in a closely matched game as the Troops overtook the Hounds late. Brandon Coe (3) and Brad Chenier (3) each had a goal and an assist while Paul Christopoulos (2) also found the back of the net. Jaromir Pytlik (4, 5) scored twice for the Hounds while Jaden Peca (5), Tye Kartye (3) and Alex Johnston (2) also found the back of the net. Rookie goaltender Joe Vrbetic picked up the win for the Battalion, making 28 saves. North Bay improves to 3-6-0-0 while Sault Ste. Marie now sits at 5-4-0-0 following consecutive losses.
GAME CENTRE

KITCHENER 7, SUDBURY 3
Liam Hawel (3, 4, 5) banged in a hat-trick, extending his current point streak to six games as the Kitchener Rangers defeated visiting Sudbury 7-3. The Rangers let 3-0 inside the opening three minutes of play as Hawel scored twice and Mike Petizian (2) also found the back of the net. Hawel completed his hat-trick 4:23 into the third period while other Ranger goals came from Ryan Stepien (4), Ville Ottavainen (1) and Greg Meireles (2). Finnish blueliner Ottavainen scored his first career OHL goal and tacked on three assists for a season-high four points. Jacob Ingham stopped 39 of 42 shots as the Rangers won big despite being outshot 42-31. Owen Gilhula (5), Blake Murray (5) and Chase Stillman (5) scored Sudbury goals as the Wolves fell to 6-4-0-0. The Rangers are 5-1-1-2 and a perfect 5-0 at The Aud this season.
GAME CENTRE

OTTAWA 8, KINGSTON 7 – OT
The Ottawa 67’s won a wild one in the nation’s capital, rallying from a 5-1 deficit to come back and beat the Kingston Frontenacs 8-7 in overtime. Overage defenceman Noel Hoefenmayer (2) tied the score with 2:19 remaining in the third period before veteran rearguard Kevin Bahl (2) scored the game winner 2:22 into the extra frame. Marco Rossi (3, 4) and Graeme Clarke (6, 7) both had two goals and an assist for Ottawa while Austen Keating (3) finished with a goal and three helpers. Mitchell Hoelscher (6) also scored for the 67’s as they outshot the Frontenacs 39-28. Nick Wong (4, 5) scored a pair of goals for the Frontenacs as they earned a point in the OT loss. Luke Drewitt (1), Vitali Pinchuk (3), Lucas Rowe (1), Evan Brand (1) and Dawson Baker (2) also scored Kingston goals while Shane Wright, Jordan Frasca and Dennis Golovatchev each had two assists. Ottawa improves to 6-3-0-0 with a second straight win while Kingston falls to 1-5-2-1.
GAME CENTRE