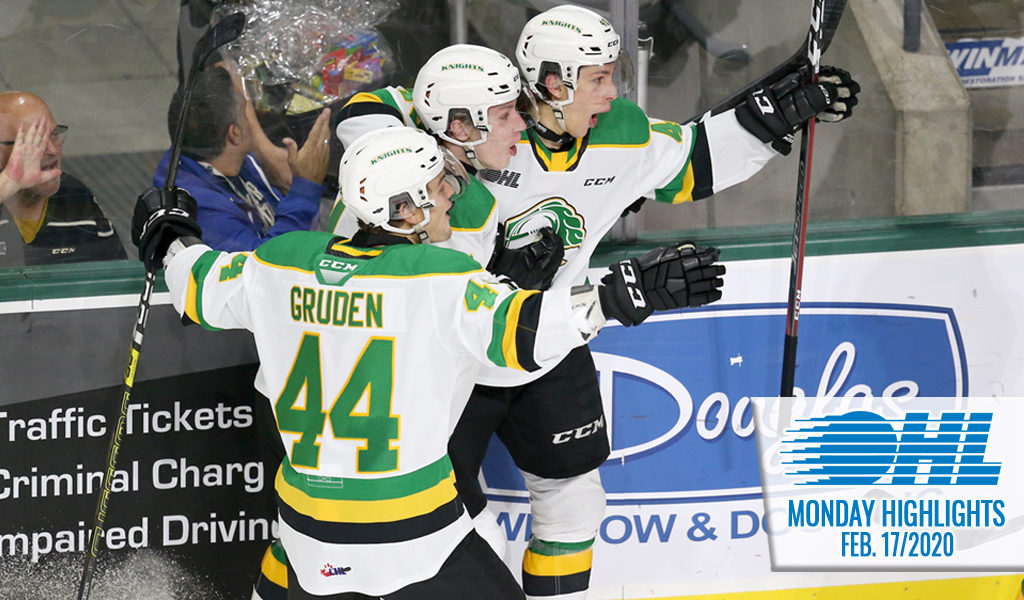 LONDON 4, OTTAWA 2
The battle of the best swung in favour of the London Knights as they secured victory with two late goals in a fast paced 4-2 road win over the Ottawa 67’s. Jack Quinn fed the puck to New Jersey Devils pick Mitchell Hoelscher for his 30th goal on the season just 56 seconds in, and Washington Capitals prospect Connor McMichael followed suit with his 40th of the year to tie the game. The middle frame remained scoreless before Chicago Blackhawks prospect Alec Regula (21) and Marco Rossi (33) traded goals in the first half of the third to keep things tied. With 1:39 to go, Ottawa Senators prospect Jonathan Gruden (26) beat Ottawa goaltender Cedrick Andree to reclaim the London lead, and Columbus Blue Jackets pick Liam Foudy (23) added insurance on the empty net in the final 15 seconds. Knights rookie Brett Brochu earned second star honours, stopping 43 of the 45 shots that came his way. Ottawa’s Cedrick Andree turned aside 25 of 28. The 67’s fall in back-to-back games for the first time since Oct. 6 and see their record drop to 42-9-0-1 atop the league standings. The Western Conference leading Knights improve to 37-14-1-1 with three straight wins.
GAME CENTRE

GUELPH 3, SOO 2 – SO
Rookie Danny Zhilkin proved to be the difference maker in the eighth round of the shootout, earning a 3-2 win for his Guelph Storm over the visiting Soo Greyhounds to stretch their point streak to its sixth game. Soo skater Joe Carroll (19) struck first, midway through the opening frame, but was followed up by Guelph rookie Clark Hiebert’s second OHL goal to even things up. Eric Uba (23) came through in the second period to give Guelph an advantage they’d hold on to until sophomore Tye Kartye (21) scored with 1:25 left in the game to force overtime. When the extra frame didn’t solve anything, Pavel Gogolev and Rory Kerins would both find the back of the net in the shootout before Zhilkin’s eighth round goal secured the Storm victory. Sault Ste. Marie outshot Guelph 33-31 before goaltenders Nico Daws and Bailey Brkin went head-to-head in the shootout, with Daws stopping seven of eight to get the win. The Hounds fall to 25-28-2-1 and remain ninth in the Western Conference, four points back of the Erie Otters. The Storm see their record improve to 28-19-2-5 at third in the Midwest Division.
GAME CENTRE

KITCHENER 7, HAMILTON 6
The Kitchener Rangers scored five unanswered goals, including four in the game’s final 10 minutes, to erase a 6-2 deficit and defeat the Hamilton Bulldogs 7-6. Hamilton’s Logan Morrison (22) opened the scoring and Kitchener’s Arber Xhekaj (5) struck next with an early tying goal. The Bulldogs reclaimed the lead thanks to a quick response from Tag Bertuzzi (21) and extended it with Los Angeles Kings prospect Arthur Kaliyev’s 40th of the season. Rangers rookie Declan McDonnell (18) cut into the Dogs’ lead before Bertuzzi (22) came back with another to round out the first. Isaac Nurse (13) and another from Kaliyev (41) pushed Hamilton up 6-2, but rookie Francesco Pinelli (16) scored on the power play for the Rangers’ third of the game to start the comeback. A couple of short handed goals from Florida Panthers pick Serron Noel (16) and overager Liam Hawel (17) gave Kitchener more life, before Hawel (18) capitalized on another power play to even things up two minutes later. With 3:53 to go, Dallas Stars prospect Riley Damiani (24) scored from the slot to complete the comeback win. Jacob Ingham picked up the win in a relief appearance for Kitchener, stopping 20 of 23. The Rangers outshot Hamilton 40-31 and, with their two points earned, sit one point back of the London Knights at second in the Midwest Division boasting a 34-14-5-2 record. The Bulldogs drop to 23-25-6-1 and continue to maintain the East Division’s fourth place slot.
GAME CENTRE

BARRIE 5, KINGSTON 2
2020 NHL Draft prospect Evan Vierling (10, 11, 12) notched his first OHL hat-trick to help lift the visiting Barrie Colts past the Kingston Frontenacs by a score of 5-2. The Fronts would wrap up the first period with a 1-0 lead thanks to Martin Chromiak (11) before three straight goals from Vierling, Luke Bignell (14), and Victor Hadfield (7) pushed the Colts ahead within the middle frame. Rookie Shane Wright (34) cut into Barrie’s lead toward the end of the third until Vierling responded 10 seconds later to widen the goal cushion. He then found the empty net to complete the hat-trick with 30 seconds left on the clock. The Colts put 30 shots on Kingston netminders Ryan Dugas and Christian Propp, while Vancouver Canucks prospect Arturs Silovs totaled 26 saves on 28 shots for the Colts. Barrie remains second in the Central Division with an improved record of 25-23-3-2 and Kingston continues to round out fifth in the East Division, holding a 17-33-2-2 tally on the year.
GAME CENTRE

ERIE 4, MISSISSAUGA 0
Rookie netminder Aidan Campbell stopped all 29 shots for his first career shutout as the Erie Otters blanked the host Mississauga Steelheads 4-0. Following a scoreless first period, Daniel D’Amato (17) and Kyen Sopa (19) struck in the middle frame before goals from Brendan Hoffmann (12) and Chad Yetman (33) came within the final 20 minutes. The game ended with an even 29 shots on both ends of the ice. The Otters’ point streak reaches its third game as their record jumps to 23-20-4-7 and they remain in the Western Conference’s eighth place seed. The Steelheads’ third straight loss keeps them third in the Central Division as they see their record fall to 25-23-3-2.
GAME CENTRE

OSHAWA 4, OWEN SOUND 3 OT
OHL veteran Brett Neumann (41) notched the overtime goal in a 4-3 Oshawa Generals win over the visiting Owen Sound Attack. Barret Kirwin (24) and Brady Lyle (18) gave the Attack a 2-0 lead before Oshawa’s Ryan Gagnier (5) and Lleyton Moore (3) evened things up late in the second. Owen Sound overager Matthew Struthers (21) gave the Bears a 3-2 edge 5:20 into the third period before Oshawa’s Allan McShane (22) countered to tie things up with 3:24 left in regulation. Neumann found the back of the net 1:24 into the extra frame to extend Oshawa’s point streak to four games. Mack Guzda shut down 28 of 32 saves between the pipes for the Attack while Jordan Kooy finished the afternoon with 24 saves to his name. The Gens move up to 28-18-4-4 on the year and third in the East Division, just four points back of the Peterborough Petes. The Attack remain seventh in the Western Conference, two points ahead of the Erie Otters with a 26-21-4-3 tally on the year.
GAME CENTRE

PETERBOROUGH 5, SUDBURY 2
Toronto Maple Leafs prospect Nick Robertson (45, 46) put up two goals and two assists in the Peterborough Petes’ 5-2 defeat of the Sudbury Wolves on home ice. Carolina Hurricanes draftee Blake Murray (28) potted one for an early Wolves advantage until the Petes came on with three in a row off the sticks of Robertson and San Jose Sharks prospect Zach Gallant (28). Fourth year skater Owen Gilhula (11) put up another for Sudbury but Liam Kirk (19) and a second from Gallant (29) secured the three-goal lead to the final buzzer. Both squads totaled 30 shots each, with Minnesota Wild pick Hunter Jones recording 28 shots in net for the Petes and Sudbury’s Christian Purboo shutting down 25 of the shots he faced. Robertson’s 46 goal total places him atop the CHL goal scoring race, and the playoff bound Petes continue to hold down second in the East Division as their record bumps up to 33-20-2-1 with a second straight win. The Wolves saw their four-game winning streak snapped, falling to 29-25-1-0 atop the Central Division standings.
GAME CENTRE

FLINT 12, SARNIA 7
St. Louis Blues prospect Tyler Tucker (14, 15) recorded two goals and five points for a career-high seven-point game, fueling the Flint Firebirds to a record 13th straight win in a 12-7 defeat of the host Sarnia Sting. Sophomore Emmet Pierce (4) scored early in the first period to get things rolling for the Firebirds before Sarnia jumped in front thanks to Peter Stratis (3) and Nolan Burke (4). The Birds then came flying with six in a row off the sticks of Tucker, Riley McCourt (17), Jack Phibbs (15), Jake Durham (19), and Jack Wismer (22). Ty Voit (7) scored another for the Sting 1:36 later and Flint rookie Brennan Othmann (14) responded less than a minute after that. Connor Roberts (16) and top NHL Draft hopeful Jacob Perreault (34) traded goals 37 seconds apart before Evgeniy Oksentyuk (27) finished off the second period with another for the Firebirds, extending their lead to 10-4. The final frame saw Sting goals from Mark Jakovljevic (2) and Eric Hjorth (11) before a marker from Flint’s Cody Morgan (14) and another from Oksentyuk (28). Theo Hill (9) netted the Sting’s seventh and final goal with 14 seconds to go, capping off the 19-goal showing. The Sting were outshot 42-36 and drop to 18-31-5-1 in the West Division’s fifth place slot. The Firebirds’ 12 goal performance and ninth road win set new club records, while Othmann’s 30 points total set a Flint record for rookie points in a season. Tucker’s seven-point game boasts the highest amount of points scored by a Firebird defender in a single game. Flint’s record improves to 35-17-1-1 as they tie the Saginaw Spirit for first in the West Division.
GAME CENTRE